The Facts Of Life: Season 7

Posted in: No Huddle by Archive Authors on October 22nd, 2015 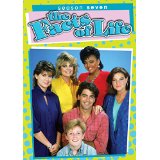 Does anyone remember The Facts of Life? The show ran from 1979 to 1988, but then there was syndication and some reunion movies. So it had a long life and was consistently popular for its predominantly female cast. Where are they now? Blair (Lisa Whelchel) did very well on the 2012 season of Survivor, for one. They were all very young when the show started but were beginning to consider college and apartments in the final years, leaving behind the safe confines that Edna Garrett (Charlotte Rae) had provided. But over the years various cast members came and went. There is a young wise guy in this season who later became a big star. No, it wasn’t Leonardo DiCaprio, because that was the series Growing Pains for the 1991 and 1992 seasons. It wasn’t Molly Ringwald, because that was the first two seasons of The Facts of Life. The Facts of Life Season Seven is when a young George Burnett (George Clooney) was introduced in 1985. It was one of Clooney’s first regular gigs. He also a semi-regular on Rosanne a couple of years later. Tootie (Kim Fields) was another cast member who was in all 201 episodes. Kim Fields went on to star with Queen Latifah in 118 episodes of Living Single. Natalie (Mindy Cohn) was also in all the episodes. Mindy went on to voice Velma in numerous Scooby-Do cartoons. Charlotte Rae (155 episodes) and Nancy McKeon (188 episodes) were the two other main cast members and worked erratically after the show concluded.

The show started with Edna heading a boarding school for girls, but as the years passed she started a shop called Edna’s Edibles with the girls helping out. Season Seven starts right after Edna’s Edibles burned down, and after dealing with that very special episode, they started a gift shop full of crazy collectibles. George is the contractor they finally hire to do the renovations. George had lived in the Middle East and frequently made light-hearted jokes about his stay there. That is a sign that it took place in the 1980’s. Things were different then. Everybody had big hair and strange pastel-colored clothes. The music was full of synthesizers. That makes reissues like this like time capsules. It’s not just nostalgia, but an examination of our shared past. Clooney is barely recognizable with his poofy, goofy black mullet and skinny frame. Clooney’s future business partner years later, Grant Heslov (Good Night and Good Luck), makes an appearance in an episode as one of Blair’s dates.

The Facts of Life was originally a spin off of the very popular Diff’rent Strokes. This was back in the days before cable. There were four television channels, and the numbers of people watching any of the network shows were much higher than today’s increasingly fractionalized marketplace with the internet taking additional eyes away from the TV.

Today’s audiences can continue to experience these shows today with cable channels like TV Land and Logo, but the process of finally getting them on DVD is more in tune with the practice of binge-watching. There are plenty of fans who will want to own all nine seasons, and they will soon have their dreams realized. The show was popular to the end, and the only reason they didn’t continue is because cast members like Mindy Cohn and Charlotte Rae moved on. Even so, it is still one of the longest running sitcoms ever.

It’s pointless to debate the quality of the show in comparison with other classic TV shows. The show earned our respect with its unique female-centered cast and somewhat courageous episodes dealing with touchy issues back in the day. Everyone has their favorite show, and if Facts of Life isn’t your favorite show, I can guarantee there are legions of fans who would disagree.

“31 Nights Of Terror” Contest – Win The Curse of Oak Island: Season 2 On DVD From History The Wolfpack (Blu-ray)