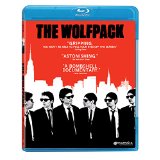 “If I didn’t have movies, life would be pretty boring.”

That statement obviously applies to those of us who spend an inordinate amount of time watching and thinking about movies. (If you’re reading this, chances are you visit this site with some regularity, so I feel good about including you in that group.) However, the notion that movies serve as a source of escape — in every sense of the word — is remarkably expressed in the captivating, stranger-than-fiction tale of the Angulo family. Unfortunately, it’s pretty apparent that The Wolfpack — a vague, shapeless documentary — doesn’t give us the full story.

The Angulo family — patriarch Oscar, his wife Susanne, their six sons Mukunda, Narayana, Govinda, Bhagavan, Krisna (Glenn), and Jagadesh (Eddie), and daughter Vishnu — have a peculiar living situation, even by New York City standards. Oscar is a Peruvian immigrant/Hare Krishna who keeps his family locked in their Lower East Side apartment out of fear that they will be “contaminated” by the city. (We learn the homeschooled Angulo children never left home more than 10 times in one year; there were also years when they didn’t leave their apartment at all.)

To cope with their confinement, the boys immerse themselves in cinema. For them, movies serve as a portal to the outside world, and the Angulos eventually create their own homemade versions of flicks like Pulp Fiction and The Dark Knight Rises. The latter, painstaking process includes writing each line of dialogue by hand so they can be placed in a script, and the creation of some truly impressive props/costumes. (A Batsuit was crafted using cereal boxes and yoga mats.)

In January 2010, Mukunda — who was 15 years old at the time — dared to leave the apartment while his father was out shopping for food. Mukunda was eventually apprehended by the police and briefly taken to a mental hospital. (The boy was appropriately wearing a Michael Myers mask during his outing.) But the excursion served as something of a breakthrough for the other Angulos, who started gradually leaving the apartment as well. One of those outings resulted in a chance encounter with filmmaker Crystal Moselle, who glommed on to the boys’ story and was eventually allowed to film in their apartment.

The movie opens with an extended look at the Angulos’ ambitious, impressive recreation of Reservoir Dogs, and Moselle’s fly-on-the-wall style is able to capture flashes of the indomitable spirit that makes the boys so easy to root for. (The best, non-movie example is a joyous singalong/dance party to Baltimora’s “Tarzan Boy.”)  Yet in chronicling their sheltered existence, the director mostly relies on scenes of the Angulos verbally recounting their years of emotional (and physical?) abuse. Meanwhile, Oscar mostly stays off-camera like a boogeyman. When he does emerge, Oscar rattles off a paranoid, semi-sensical rant that only partly helps explain what’s going on here. The takeaway for me is that even though the boys are the focus of the film, there’s a strong chance their affable, traumatized mother has had it much worse.

The one major event that isn’t chronicled — and is barely mentioned — in The Wolfpack is the Angulos’ meeting with Moselle. I can understand the director not wanting to make herself a part of the story. But given the fact that the filmmaker apparently became a major presence in the boys’ lives — more on that in the Special Features — her exclusion makes the Angulo saga feel frustratingly incomplete. (There’s at least one moment where one of the boys addresses “Crystal” off camera, which is especially confusing if you don’t know the story behind The Wolfpack.)

Even more confounding is the number of unanswered questions raised by the documentary. And I’m not talking about the sort of provocative, thought-provoking questions raised by good art. I’m referring to unaddressed queries like “Why did Oscar move them to the Big Apple in the first place if he thinks it’s so rotten, and why does he keep his family there?”, or “Where is *any* government agency?” and “Where do all the movies the boys watch come from?” (We learn that Oscar got the kids into music and presumably provides the movies…so, perhaps he’s not a total monster?!) There are other details — like the fact that two of the boys adopted anglo first names and their mother’s maiden surname — that aren’t even acknowledged.

The Wolfpack is presented in an aspect ratio of 1.78:1. The 1080p image is arrived at with an AVC MPEG-4 codec at an average of 24 mbps. For a variety of reasons, the Angulos’ story isn’t very pretty to look at. Most of the movie is comprised of shabby footage shot by Moselle at their modest apartment, which features low, natural lighting. It looks good compared to the glimpses we get at the boys’ homemade movies — which are presented in a full-screen aspect ratio — but it’s still not much to write home about. The picture (and clarity) perks up whenever the Angulos leave the apartment, including trips to Coney Island and a nighttime excursion to their first movie theatre. Black levels — which reflects the color of the boys’ flowing hair, as well as their preferred wardrobe choice — are solid.

The DTS-HD Master Audio 5.1 track is as dialogue-driven as most documentaries, offering a nicely balanced presentation but little in the way of rear speaker activity. (The exception comes when the boys venture out of their home, but even then the ambient noise is pretty muted.) The older camcorder footage is appropriately muffled and offers a nice contrast to the comparatively clean sonic presentation we get on this track.

Interview with The Wolfpack: (16:18) You immediately notice some of the boys are sporting shorter hairstyles and have gone a bit Hollywood. This is the place where they actually recount their fateful meeting with the movie’s director, and we get an update on their lives. (Most of them still live in the same apartment with their parents.)

Interview with director Crystal Moselle: (6:37) Moselle talks about the way this pack of long-haired boys caught her eye — and inspired the movie’s title — and describes the 4 ½ year process of filming the documentary. She also notes that the Angulos had already started coming out of their shell by the time she met them.

Mirror Heart: (6:35) Vice Media worked with the Angulos to produce this surreal short film involving a giant bee, an anthropomorphic handheld phone, and a zombie construction worker. Honestly, I had no idea what this thing was about. Thank god for…

The Making of Mirror Heart: (16:09)…not only do we get Mukunda’s explanation of the film — he directed, Govinda shot it, and it’s inspired by the buzzing tone of a phone call — but we get a look at the Angulos’ DIY approach to costumes, props, and film production in general.

Window Feel: (6:26) Another surreal short, although we actually got a peek at the making of this one toward the end of The Wolfpack. This one is directed by and stars Mukunda and is more accessible, as a man experiences various emotions as they glide across a window. In fact, the most confusing thing about this movie is the fact that their monstrous dad appears in it! (I don’t know about you, but I wouldn’t exactly be in a hurry to cast the guy who imprisoned me all my life.)

The Wolfpack Goes to Hollywood — First Trip to Los Angeles: (20:04) The best featurette is saved for last. The boys and Moselle travel to Hollywood, where they attend a premiere of The Wolfpack and get to meet David O. Russell and William Friedkin, who are both endlessly tickled and delighted to meet the Angulos. Russell directed The Fighter, which was the first movie the boys ever saw in a theater. Friedkin offers several profane bits of advice, including urging them never to move to Hollywood.

The Wolfpack tells an extraordinary story in an unnecessarily jumbled and abstract way. The movie is Moselle’s feature directorial debut, and I can’t help but wonder what the result would’ve been if the boys had bumped into a more experienced filmmaker on the street.

Then again, you can’t really blame her for hanging on to the Angulos with both hands…their story is way too good to pass on.

The Facts Of Life: Season 7 “31 Nights Of Terror” Exclusive Interview With Matthew A. Brown: Writer/Director Of Julia