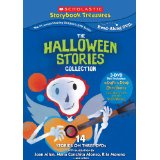 31 Nights Of Terror can also be educational. Scholastic Storybook Treasures brings you The Halloween Stories Collection. It’s a 3 DVD set that includes 14 Halloween stories for early and pre-readers. It’s completely family safe. It also encourages creativity and music appreciation. You can win the set for your little ghoul thanks to Scholastic Storybook Treasures and Upcomingdiscs.
To win just follow these instructions.

Gino Sassani is a member of the Southeastern Film Critic's Association (SEFCA). He is a film and television critic based in Tampa, Florida. He's also the Senior Editor here at Upcomingdiscs. Gino started reviewing films in the early 1990's as a segment of his local television show Focus. He's an award-winning recording artist for Omega Records. Gino is currently working on his 8th album Merchants & Mercenaries. Gino took over Upcomingdiscs Dec 1, 2008. He works out of a home theater he calls The Reel World. Favorite films: The Godfather, The Godfather Part II, The Body Snatcher (Val Lewton film with Karloff and Lugosi, not the pod people film), Unforgiven, Gladiator, The Lion King, Jaws, Son Of Frankenstein, The Good, The Bad And The Ugly, and Monsters, Inc.
“31 Nights Of Terror” There Is a 13,000 Year Old Black Knight Satellite Orbiting the Earth Z for Zachariah (Blu-ray)