“31 Nights Of Terror” The Horror Network 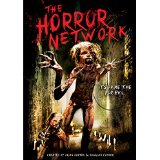 The Horror Network Vol. 1 is an anthology of five short horror films, compiled by Douglas Conner and Brian Dorton. I absolutely love short films: I have created a few of my own, and I have been part of the selection committee for a short film festival. This anthology is fantastic in that it combines my love of short films and my love of the genre of horror. Although most films in this anthology could most certainly be cut for time (as is the case with most independent short films), they do a fantastic job capturing the elements of horror that make your hair stand on end.

The first installment of this anthology is a film called 3 a.m. Looking at the film as a whole, it is certainly a strong opening statement that will keep audiences engaged throughout the entire anthology. While some of the dialog spoken over phones is hard to hear, the rest of the film’s sound design is devoted to creating the horrific atmosphere. The film is essentially about a woman being stalked by an unknown entity. The horror in this film comes from the bloodcurdling howl that echoes across the countryside more than once, something that the main character hears and reacts to. While the source of this sound is never fully seen, the fear the sound evokes is memorable.

The following segment is a dialog-heavy film titled Edward. While I appreciate the concept achieved, the film itself carries on a bit too long. A young man named Hal talks with his psychologist, Dr. Aleksey. As his session continues, Dr. Aleksey begins to realize that his patient has deeper issues he has not been taught how to handle. The horror in this short is not achieved through its dialog, but the way in which the dialog is paced. Though it does seem to carry on too long in some areas of the script, the beats in between each action create a rather ominous atmosphere that I enjoyed.

The next is a short titled The Quiet, which tells the story of a deaf girl being stalked by an unknown assailant. This is one of the shorter films in the anthology, and it has the smartest sound design. Because the girl is deaf in one ear and is written to “not wear her hearing aid on occasion”, the filmmakers were able to liberally play with the sound design. Primarily focusing on muffling sounds to emulate deafness for the viewer, I think that the finished product is very believable. Without the experimentation with sound design, the horror in this film would be rather flat.

The next film in the anthology is titled Merry Little Christmas, and I must say, it is most certainly the star of this grouping. The image on the cover of the DVD comes from this film. Where I thought that the monster depicted was going to look cheaply made while in motion, this film proved me wrong.  The story focuses on a teenage girl living with traumatic memory of witnessing her father brutally beat and rape her mother. The visuals in this film are absolutely stunning. Everything from color, to camera movement, to set design: this film is what earned the anthology a three star rating, rather than two and a half. I can’t wait to watch it a second time!

The final film in the anthology is titled The Deviant One. Shot in black and white, the film tells a story of an unnamed, sexually deviant serial killer, who murders a man and disposes of the body underneath his own home. Like many films before it, there is clearly a connection to the real life “killers next door” (such as John Wayne Gacy, Jeffrey Dahmer, or Dennis Rader). However, there is something different about this iteration. The film appears to be made on a minimal budget with non-professional actors. While this may turn some viewers off, I believe its simplicity adequately captures the horror of murderers in our midst, much like Henry: Portrait of a Serial Killer did in the late 90’s.

Bear in mind that all these films are independent short films, but each one packs enough charm to hold your attention throughout. Considering that this is “volume 1” of The Horror Network, I sincerely look forward to seeing future volumes come to Upcoming Discs headquarters. Douglas Conner and Brian Dorton did very well in their selection process: They definitely understand what it means to be a “horror movie”. The Horror Network will make an excellent addition to any horror fanatic’s collection.