“31 Nights Of Terror” The Exorcism of Molly Hartley (Blu-ray)

Posted in: Disc Reviews by Gino Sassani on October 31st, 2015 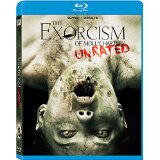 I must start this review by admitting that I did not see 2008’s The Haunting of Molly Hartley. In spite of the fact that very few people did actually see that film, I was surprised to find that a sequel would show up seven years later just in time for the Halloween private shock-fests and schlock nights. If you happen to be a fan of the original film, that doesn’t mean you should get too excited by the sequel. There is little to tie these films together. Steven R. Monroe takes over the director’s chair from Mickey Liddell. Sarah Lind now plays Molly, who was played by Haley Bennett in the first film. None of the original writers remain. While the title character remains, I suspect the thread that actually connects these two films wouldn’t support the weight of a fruit fly. Therefore I intend to review this film on its own merits with no more reflections upon what once was back in the salad days of 2008.

Father John Barrow (Sawa) takes part in the exorcism of a young pregnant woman. It goes horribly, and the woman and the senior priest end up dead in an obvious imitation of a famous scene from The Exorcist. What ends in that classic superior film is only the beginning here. Fr. Barrow is found legally liable for the deaths. He pleads insanity at the bequest of the Vatican and is sentenced to the Catholic mental facility at Clovesdale Institute. Here he meets Father Davies, the institute’s chaplain, who is about to retire. Barrow has received a Papal decree that he no longer perform his priestly duties. I appreciate the accuracy here. 12 years of Catholic school has left me with the knowledge that priests can never have their powers taken from them. They can only be ordered not to use them.

Enter Molly Hartley (Lind). She’s partying hard. It’s her 24th birthday, and she’s just been made the youngest partner ever at her law firm. That means getting very drunk and inviting another woman home to play some bed games with her and her boyfriend (?). Of course, that goes as badly, as Fr. Barrow’s night did. She ends up with a couple of bodies in her tub and no memory of what happened. For a woman who just made partner at a law firm, she’s quite lost when the cops ask to search her apartment on a noise complaint obviously filed hours earlier. Good thing this whole Antichrist thing is working out for her. I don’t think the world of law was going to pay off after all. Of course she’s sent to Clovesdale, where Fr. Barrow notices the strange occurrences that accompany her arrival. Looks like Fr. Barrow is back in the saddle and ready for another exorcism. Cue the usual growls, body contortions, pea soup, and violent thrusts.

Credit the writers for giving us more than just the usual exorcism trappings. There’s a story here that plays out under pretty solid pacing. You have to forgive the obvious plot holes and move along with the rest of us. Gina Holden puts in the most dynamic performance of the cast. She plays Clovesdale psychiatrist Dr. Laurie Hawthorne. This is the character who tries to get to the “scientific” explanation but eventually understands there’s more going on here than her experience or education can explain. I think she makes quite a bit out of what is really a pretty small part. She’s criminally underused and was likely only available for a few days of shooting.

The film provides a nice subtext of a cult containing at least one surprising member. We learn that many of these events were manipulated so that Satan could be born into the world again. OK, so Molly wasn’t exactly the Antichrist. That was the last exorcism film I watched. She’s just supposed to give birth to him. The ritual stuff avoids some of the tired trappings of candles and attempts to provide a rite framework different from what we’ve seen before. Give it a point or two for originality in a crowded sub-genre.

There’s also an interesting little device that looks like it could have come out of the Hellraiser universe. It’s a substitute for the swine that Christ used to house the demons he exorcised in his day. It has a lot of gears and fancy decorations. It ends up becoming a central part of the ceremony this has all been leading up to.

There’s enough scary entertainment to be found here to include it in your Halloween festivities. It’s original enough. The acting is pretty rough. Just can’t buy Devon Sawa’s performance as Fr. Barrow. Sawa appears to be phoning it all in and probably wanted to be somewhere else. Sarah Lind isn’t very passionate either. You’ll just have to look the other way here and enjoy what you can get from the above-average production values and twists.

The Exorcism of Molly Hartley is presented in its original aspect ratio of 1.78:1. The 1080p image is arrived at with an AVC MPEG-4 codec at an average 35 mbps. You’re not going to get a lot of detail or color out of this high-definition image presentation. There’s far too much color correction happening here, and many of the scenes play out with this rather dull greenish-yellow paleness that overdoes the attempt at atmosphere. That means weak black levels with almost no shadow definition to speak of. It’s not really a flaw in the transfer, because this is how the film is intended to appear. I would suggest going a little easier on the color-correction toys in the future.

The DTS-HD Master Audio 5.1 is typical for this kind of film. The subs are there to create sudden low-frequency jump starts, and the score is attempting to imitate Michael Oldfield’s awesome Tubular Bells from The Exorcist. It doesn’t work. Dialog is fine, and the surrounds do offer some creepy ambient sounds that can indeed immerse you, at times, in the “spirit” of things. The exorcism scenes crank up both the volume and the sub levels.

Exorcism – Beyond One Truth: (18:24) This feature takes on the religion vs. science explanations for possessions. You get priests and religious scholars along with people from the mental health industry giving their thoughts.

Clovesdale Institute’s Classified Security Camera Footage: (4:04) You get small snippets of scenes from the film, but from a different angle and through the eyes of the institute’s security cameras.

Director’s Diaries: (4:04) These are four very short subject specific behind-the-scenes pieces. They are too brief to be of any informative value.

I’ve been watching a lot of possession films lately. Part of it is the Halloween season, and part of it is a flooded market in the sub-genre. For over 40 years filmmakers have been chasing The Exorcist, hoping to top it in one way or another. I don’t think it’s ever going to happen. Sure, there’s room for some entertaining films, and there have been some very good films over the years. My advice to those in the chase: make your own film and stay away from the iconography of the classics. Instead of trying to match someone else’s greatness, create your own future classic. “I command you.”

Gino Sassani is a member of the Southeastern Film Critic's Association (SEFCA). He is a film and television critic based in Tampa, Florida. He's also the Senior Editor here at Upcomingdiscs. Gino started reviewing films in the early 1990's as a segment of his local television show Focus. He's an award-winning recording artist for Omega Records. Gino is currently working on his 8th album Merchants & Mercenaries. Gino took over Upcomingdiscs Dec 1, 2008. He works out of a home theater he calls The Reel World. Favorite films: The Godfather, The Godfather Part II, The Body Snatcher (Val Lewton film with Karloff and Lugosi, not the pod people film), Unforgiven, Gladiator, The Lion King, Jaws, Son Of Frankenstein, The Good, The Bad And The Ugly, and Monsters, Inc.
“31 Nights Of Terror” The Horror Network Max (Blu-ray)