Posted in: No Huddle by Archive Authors on November 3rd, 2015 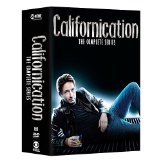 “Sometimes it’s better not to touch your dreams, take it from someone who knows.”

In the first season of Showtime’s Californication, we were introduced to David Duchovny’s character, bitter yet upbeat writer Hank Moody. Hank, after moving to Los Angeles on the heels of his first novel – a critical darling entitled “God Hates Us All” – has recently lost his long-time love and, by extension, his daughter, to a straight-arrow bore who makes his girlfriend Karen (Natascha McElhone) feel safe.

The first season told us the story of Hank’s attempts to win Karen back and his increasingly perilous relationship with a sixteen-year-old Lolita whose inclination for combining sex with a wicked right hook leads to one of television’s all-time great novel titles. Oh yeah, and it also featured lots and lots of raunchy sex between Hank and many gorgeous women. This was a major reason for the show’s notoriety, but what really makes the show work is Duchovny’s portrayal of Hank. He imbues him with a charming kind of good-natured nihilism and, even when he is being a grade-A jackass, we still like him.

The second season takes up the story right where it was left. Hank and Karen are back together, and everyone, including their daughter Becca (Madeleine Martin), is waiting for the other shoe to drop. Hank, despite his best efforts, has a history of blowing it, an expression that takes on a new and awkward meaning in episode one when Hank, attempting to pleasure Karen at a party, stumbles into the wrong room and, in the dark, begins to perform oral sex on the wrong woman. This is the first bump in the road for Hank and Karen, and that road stays bumpy for the rest of the season, not only for Hank, but also his agent Charlie (Evan Handler), whose marital and career problems lead him to some truly unusual places.

The most common criticisms of the second season were that the show had lost its edge and that it was trying too hard to be funny. Admittedly, a show like Californication is never going to be able to reproduce the pleasure of discovery one gets upon meeting and getting to know a cast of characters this quirky and entertaining. In season two, creator Tom Kapinos ups the ante by putting the characters into even more ludicrous situations. This may have been an attempt to offset the perceived (and literal) neutering of Hank’s character, and sometimes it is a bit too much, but the dialog still crackles, and Duchovny continues to imbue Hank with intelligence and sardonic wit.

There were also complaints about the way that Hank and Karen’s relationship plays out. And while the breakdown in their relationship does feel a bit forced, let’s face it, a happy ending would mean the end of the series.

However, while the plots are a bit sillier, and some of the plot developments seem a bit arbitrary, there is one big factor on the plus side of season two, and his name is Callum Keith Rennie. Rennie is one of the best actors working today, and from the moment he enters the frame in the first episode he elevates the show to a new level. His character, rock legend Lew Ashby, befriends Hank and, with his sex, drugs, and rock’n’roll lifestyle, brings a moral decadence to the proceedings that Hank no longer can in his attempts to clean up his life. He is an absolute joy to watch, and the way he and Duchovny play off each other – there is a brawl between the two late in the season that is priceless – gives the show an element that more than makes up for any other shortcomings.

Now we get to the third season. Hank ends up getting a job as a college professor, but you already know that with his sexual proclivities, that’s going to get him in some trouble. In this case, he happens to be going after the dean’s wife. Looks like his students aren’t the only ones with a lesson to learn here. Then there’s Jill, his teaching assistant, and Jackie, a student. Can you see where this is going yet? It’s like a kid in a candy store. Rick Springfield guests as himself in a few episodes; Marcy ends up crushing on the rock idol. Give the guy some credit. He plays a very unflattering image of himself, including an addiction to cocaine. Peter Fonda also guests on an episode.

What a difference three years makes. That’s right; the beloved series decides to return with a flash-forward three years ahead, giving the series a new and fresh outlook with some new faces and a few familiar ones as well. The time may have changed, but thankfully Hank Moody sure hasn’t, still managing to get himself in all kinds of trouble despite his best intentions. This year he must deal with an unstable ex-girlfriend, his daughter’s philandering boyfriend, and keeping his extremely volatile new client from finding about the tryst he had with the client’s girlfriend; it can only happen to Hank Moody.

At the beginning of last season, Hank was up a certain creek without a paddle as he stood trial for statutory rape, and given that he actually committed the crime (albeit unwittingly) it seems that he would be found guilty. Luckily for him (and us), though he was found guilty, he received a slap on the wrist. Deciding he needs a fresh start, Hank decides to get in the car and drive. Three years later, Hank is back in his mecca, New York City. After a bad breakup, Hank needs a break and accepts his best friend and agent Charlie Runkle’s invitation to fly back to Los Angeles to meet with a potential client, hip hop mogul Samurai Apocalypse (RZA) about developing his screenplay.

On the plane, Hank meets a beautiful woman named Kali (the gorgeous Meagan Good: words don’t express my love for her), and in true Moody fashion the two indulge in a rendezvous on the plane. After leaving the plane, Hank goes directly to Karen’s new home that she shares with her new husband and Hank’s former rival Bates (Jason Beghe). Upon his arrival, he learns that his beloved daughter Becca is now involved with someone who resembles a younger version of himself and instantly doesn’t like the guy.

Before long, all Hank wants is to return to New York, but every attempt to escape the City of Angels is met with a disaster that pulls him back in. Ultimately, Hank accepts Samurai Apocalypse’s offer to write his screenplay, Santa Monica Cop (I know what you’re thinking, what a complete rip-off of Eddie Murphy’s critical franchise; don’t worry, it’s more of a homage and it is addressed in the series), just in time to realize that the woman he joined the mile high club with is also Samurai’s girlfriend. I repeat, it can only happen to Hank Moody.

Six seasons (and several fictional years) in and Hank Moody (David Duchovny) is still drinking, snorting, womanizing, and procrastinating from doing anything productive with his writing. Hank is still riding on the success of his first book and the subsequent money he received after it was adapted into a motion picture. Hank seems like the type of character who is incapable of any personal growth (aside from around his trousers…which is just the kind of joke he’d try to make), but with his daughter wanting to live abroad, which threatens his chances at reuniting with his on-and-off girlfriend, perhaps this season he’ll mature.
Right off the bat I should state that I am not a big fan of shows (and movies) that depict self-destructive people who are living incredibly privileged lives while contributing nothing to the creative world they claim to be a part of. I understand that Hollywood is inherently phony; therefore I should not take any of their actions seriously…but it can still be grating. To help emphasize the puffy, fake California life contained in this series, we have the introduction of a woman named Faith as a new love interest for Hank. Faith is a groupie, but she calls herself a “muse”, which is a concept borrowed (stolen) from Cameron Crowe’s Almost Famous. What could be more frivolous than romanticizing the notion of existing without responsibility, in the forever childlike state of living the rock n’ roll life without actually making any actual music, just sleeping with the musicians (or now, a has-been writer)? This show has essentially shoehorned in the hooker with a heart of gold tale…but more pretentious.

Californication is like wine; it just gets better over time, because after six seasons, the show continues to keep you laughing and entertained. Every year you are taken on a journey which on the surface seems to be about how many ways can a guy disrupt the balance of his life by sinking into depravity, but beneath it there is an art and grace to how every situation is handled, and it makes the story worth telling.

No other actor could have done Hank Moody the way David Duchovny has; it’s a bold claim, but it’s the truth. It’s a short list of actors who possess that same level of range, very few actors who could breathe that kind of life into a character that is both creatively brilliant and emotionally broken. I am also impressed with the evolution of Madeleine Martin; I have watched her grown up playing the role of a daughter who usually ends up being more like a parent to her manchild father, and now she’s a mature and attractive young woman capable of making her own choices in life, albeit not always the best choices, but such is life.

It’s a bit strange to watch the once-great Fox Mulder in this sexual adventure comedy that rings a little too close to home for the actor. He’s done a little time for sex addiction in rehab. Of course, what actor hasn’t been to rehab for something or another? It features subject matter and language that many people find distasteful. However, if you like raunchy comedy that also manages to be intelligent, mature, and moving, you can’t go wrong. If you’re already a fan, then purchasing the set is a no-brainer. And if you aren’t sure whether it’s worth watching, the answer is yes, it definitely is.

This review was written by Gino Sassani, Jeremy Butler and William O’Donnell.