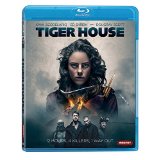 There are no tigers — or any other large cats — to be found in Tiger House. The closest we get is a rather hefty guard dog whose screen time is tragically cut short. (Figured I’d give the animal lovers out there a fair warning.) Instead, the only prowling we see in this low-budget home invasion thriller comes from the violent gang of thieves who bust into a suburban home and hold the unsuspecting family inside hostage. Unfortunately for the crooks, there’s already an uninvited visitor in the house.

That visitor is Kelly (Kaya Scodelario), who has snuck over to see her grounded boyfriend Mark (Daniel Boyd). The movie opens with a flashback to the crossbow-related accident between the young couple that ruined Kelly’s aspirations of becoming a gymnast. Now Mark’s mom Lynn (Julie Summers) considers down-on-her-luck Kelly to be a bad influence on her straight-arrow son, which explains all the sneaking around. Meanwhile, Mark’s stepdad Doug (Andrew Brent) is some sort of financial bigwig, which makes him an attractive target for the group of crooks looking to rob a bank.

Enter the gang, which is led by man-with-the-plan Shane (Dougray Scott). The idea is to hold Doug’s family hostage, forcing him to cooperate with the heist. However, Shane is gravely injured during the siege of the house. Most of the crooks leave with Doug to commit the robbery, while unstable ex-con Callum (Ed Skrein) stays behind to look after Shane and the hostages. What Callum doesn’t realize is that Kelly has concealed herself under the bed where Shane is resting from his wounds.

That opening flashback is presented in a way that made me worry for a minute this movie was going to be another found-footage fiasco. But while the story may not be told strictly from a first-person perspective, director Tom Daley — working from a script by Simon Lewis — never leaves the movie’s titular abode, which gives Tiger House an effectively claustrophobic feel. Instead of seeing the heist play out, for example, we hear how it’s going through walkie-talkies held by Shane and Callum.

Even though a little too much screen time is devoted to Kelly cowering under that bed, I actually think the director could’ve pushed the POV idea further by staying with our heroine the entire time. For instance, there’s a sequence where Kelly hides out in the attic. I think it would’ve been more effective to follow her — hearing but not being able to see the man below coming to kill her — rather than showing us the perspective of the bumbling robber trying to get at her in vain.

Scodelario — whom I only know from some unimpressive work in The Maze Runner movies — makes for an appropriately scrappy heroine. The actress is better when Kelly is scared-yet determined than when the character shifts into action movie butt-kicking mode. (The shift is not nearly as elegantly constructed as it is in something like You’re Next.) Scott makes for a pleasingly calming presence and a good counterpoint to Skrein’s whack job histrionics.

Unlike the robbers in the story, the 83-minute Tiger House gets in and out pretty briskly. The movie does have some impactful touches; a death-by-cricket bat is brutally effective, and I liked the minor swerve of having Chekhov’s crossbow go off well before the movie’s final act. (Although the weapon, not surprisingly, makes a key, convenient re-appearance toward the end.) Unfortunately, what looks poised to be a mid-range, compulsively-watchable little thriller is largely undone by its thoroughly dopey conclusion.

Tiger House is presented in an aspect ratio of 2.35:1. The 1080p image is arrived at with an AVC MPEG-4 codec at an average of 21 mbps. We actually get a full-screen aspect ratio for the camcorder opening, but this is otherwise a pretty standard, modern HD presentation. This Blu-ray from Magnolia Home Entertainment offers a slick, blemish-free presentation that tilts ever-so-slightly toward the chilly side. (For contrast, compare the baseline image to the intentionally grainy surveillance footage.) There are also impressively deep black levels and strong separation, which are crucial for the nighttime home invasion sequence early on.

The DTS-HD Master Audio 5.1 track features the obligatorily aggressive “thriller score” that gets the subs rumbling early on over the opening credits. Otherwise, this is a pretty restrained presentation. As I mentioned before, the action takes place exclusively inside the house, which cuts down the potential for atmospheric noises. As a result, the rears largely support the score by Roger Goula Sarda. Instead of merely echoing the music from the front, the rears do offer a nice bit of separation. There are also a few neat bits of directionality when Callum is banging away at something in a different part of the house from where Kelly is hiding.

The Making of Tiger House: (19:33) Director Tom Daley talks about how his theatre background helped him tell this self-contained story and how his aspiration was to make an “elegant thriller.” Cast and crew also talk about filming in Cape Town, South Africa, despite the fact that we never leave the house in the story. (So really, they could’ve been filming anywhere.) Daley and the other actors also speak glowingly about Scodelario, who was game for anything the role required.

From The Strangers to Home Alone, there’s more than one way to tell a home invasion story.

Tiger House displays some flashes of potential, but is ultimately too frustrating and sloppy to take totally seriously.