Some Kind of Hate

Posted in: No Huddle by Dan Holland on November 4th, 2015 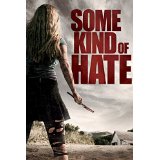 “Seriously, how cliché is this?”

Misunderstood loner: check. Bullies: check. Isolated “camp”: check. Vengeful spirit: check. Looks like we got ourselves a horror movie! Every fan of horror has seen at least some combination of those themes in a film at least once. Now here they are, wrapped up an impressively cohesive package.  Although this film thrived on its use of clichés, it made conscious efforts to incorporate a lot of original ideas. Between the clichés that I am tired of and the original ideas that just didn’t work very well (for me), the film finds a balance that makes it enjoyable.

Lincoln Taggert (Ronin Rubinstein) is a teenager who is growing up in a broken home and is consistently bullied in school. One day he decides to fight back, and as a result, he is sent to a sort of rehabilitation camp in the middle of the desert. While at this camp, he meets, you guessed it: more bullies. He confides in a girl named Kaitlin (Grace Phipps), and they begin a relationship together. However, even through Kaitlin’s comfort, Lincoln cannot quell his anger towards those who hurt him. As a result, he unknowingly summons the vengeful Moira (Sierra McCormick) to wreak havoc on the unsuspecting camp.

The first surprising aspect of the film is how great the acting is. Not that I was expecting the acting to be bad, but when I want to watch a horror film, I never expect award-worthy performances. While I wouldn’t call the performances in Some Kind of Hate award-worthy, they are good enough for me to take note. Each performance is believable, especially the chemistry between Rubinstein and Phipps, which is something that doesn’t typically happen in horror films. Where the acting became a little off-putting was Sierra McCormick’s portrayal of Moira. Not that she was terrible, but this is the primary instance where the film played with my expectations. The vengeful spirit is not silent. In fact, she has a rather boisterous personality.

Perhaps this is my age speaking, but the bully cliché in films is getting harder and harder for me to believe. In recent films that are preoccupied with bullying, the casting for the victim is the cause. You might be able to dress someone up as a Goth or have them act sensitive, but you can never escape the build and age of the actor. Some Kind of Hate is the third film I have seen this year where the “high school” victim is clearly much older and is in impeccable physical condition. In addition to the poor visual representations, the scenarios in which they are being bullied are incredibly staged.

What I enjoyed most about the film was the way in which Moira kills her victims. She inflicts pain onto herself (cutting herself, hitting her head onto hard surfaces, etc.) and the wounds she inflicts supernaturally affect the victim. If she cuts open her arm, her victim’s arm will rip open and spray blood everywhere. The special effects for these scenes are very well done, and if they are not the best, they are very well hidden. However, it is the way that this unique type of killing is written into the movie’s story that I enjoyed most. So much so, that I will not spoil it here!

Overall, the film was very fun to sit through, even with the overbearing clichés. I feel like they could have played with the bully clichés a little more than having the actually bully reference the trope (see the beginning quote), but the acting and the gore are ultimately what make your attention worthwhile.