Posted in: Disc Reviews by Gino Sassani on November 5th, 2015 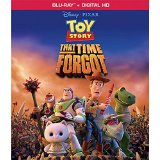 “Be grateful for your gifts. They are all around you.”

This is the gift that has been giving for 20 years. It’s a bit hard to believe that it was all the way back in 1996 that we had our first adventure with Pixar’s imaginative Toy Story. Since that time we’ve had two solid theatrical sequels and now a second television/video short. It’s a bridge to the fourth theatrical film on its way. But that’s still a couple of years down the road, so it’s rather nice to be able to spend some time, no matter how brief, with the gang we fell in love with nearly 20 years ago. The Toy Story That Time Forgot is just that warm reunion we needed. It’d intended as a Christmas special, and it just may make those new Christmas tree lights shine a little brighter this season.

Television shorts and video specials that bring together beloved theatrical characters are usually a mixed blessing. Too often they are mere cheaply made imitations of the real thing with C-list voice talent doing horrible impersonations of the celebrities from the movies. That’s just not the case with The Toy Story That Time Forgot. All of the classic characters have retained the big-screen voices. The big names might have limited roles in this film, but you’ll be happy to know that it’s Tom Hanks voicing Woody and Tim Allen voicing Buzz Lightyear once again. There are also very brief returns of Don Rickles, Joan Cusack, Wallace Shawn, and even Timothy Dalton.

But this is not really their story. It’s nice to have them along, but this is Trixie’s story. Trixie is that lovable triceratops we met back in Toy Story 3. She was one of Bonnie’s toys, Bonnie who has now inherited Andy’s toys, and they live together with her now. Trixie is once again voiced by the rather high-pitched voice of Kristen Schaal.

Trixie (Schaal) is a little depressed that, so far, Bonnie hasn’t let her be a dinosaur in their play time. That role has been falling to Angel Kitty (Hudak), who sounds too much like Ike from South Park. Christmas has just ended, and Bonnie (Hahn) has been invited to her cousin Mason’s (Cope) house for a play date. She brings along Trixie and some of the other toys. But as soon as she gets there she marvels at Mason’s new video game console and tosses the spaceship backpack of toys in Mason’s room, where there are a ton of toys, some unopened in the box. Mason’s been too busy with his new game system to bother playing with his new Christmas toys: the Battlesaurs.

For Trixie and the gang, it’s like walking into a strange new prehistoric world. Mason has the entire set. These are Roman centurion-styled dinosaurs from a popular cartoon show. They even have a theme song. The leader is Reptillus Maximus, voiced by Rome’s own Lucius Vorenus himself, Kevin McKidd. He’s rather taken with Trixie, and he shows her the world of the Battlesaurs. But it turns ugly when the characters discover she’s marked with Bonnie’s name. It’s into the arena, and let’s just say toys don’t leave that place in one piece. Their only hope is to attract Bonnie’s attention to save the day.

Reptillus Maximus is a rather fine new character, and it would be nice to see him in the next film. That’s not likely, as he and his kind are from Mason’s room and not likely to be a part of the next theatrical story. Kevin McKidd brings him to life, and while I’m not a fan of “mushy” cartoons, the relationship between him and Trixie is developed quickly and solidly. That chemistry has to work, because it’s the central arc, and we’re not going to get enough of Hanks or Allen, if that’s what you’re really hoping for. Instead the world of the Battlesaurs and this central relationship carry the short running time so that we don’t have time to miss the big guns too much.

The animation level might not be up to par with the big-budget films, but it isn’t too shabby either. This is groundbreaking television animation quality, and it doesn’t look like they cut any serious corners. The 22-minute running time zips by you swiftly, and before you know it, it’s all over. There’s a promise for Trixie to return for another play date, and that leaves the door open for more of these shorts to continue this particular corner of the Toy Story universe.

The film’s strength is how effectively they use that short 22 minutes. I was impressed how many new characters and how much of this new cartoon world we were able to get to know so well. There’s not a second wasted, and the story is tightly paced and written. Of course, the story doesn’t quite measure up to the big-screen adventures. Fans will likely wince a little that much of the plot really mirrors the basic idea of the first Toy Story. These toys don’t know they are toys and believe they are the real thing. Give the writers credit for acknowledging the script rip when Buzz finds it extraordinary that a toy could not know it is a toy.

The Battlesaurs will remind you of the many cartoons that we’ve seen over the years that might be more interested in selling toys than actually entertaining kids. They’ve been around since I was a kid and are out there today. It’s perfect fodder for a Toy Story idea. And this short format is a perfect place for that to happen.

Toy Story That Time Forgot is presented in its original aspect ratio of 1.78:1. The 1080p image is arrived at with an AVC MPEG-4 codec at an average 25 mbps. There’s not a lot of running time here, so I’m a bit puzzled by the lower bit rate. Fortunately, this isn’t anything complicated. It’s a digital creation rendered on another digital platform, so it looks pretty solid. Colors are vibrant, and detail is impressive. Black levels are better than average but not quite so crucial here. The entire image presentation has a rather familiar look, and we’re totally pulled into that universe again.

The DTS-HD Master Audio 7.1 is likely overkill for a television short. That doesn’t mean I don’t appreciate it. Surrounds aren’t exactly aggressive, but they are subtle. The dialog comes through just fine, as do the whimsical score moments. This is an immersive experience for the entire family.

Reptillus!: (10:51) This is a nice spotlight on the new character. Kevin McKidd leads the look at everything from early concept art to voice recording sessions. There’s a lot of back-story here that shows a lot of thought went into this stuff.

Toy Story Goes To Comic Con: (3:39) From the short running time you know this isn’t a typical panel. You do get a couple of brief moments from the panel, but this is largely the crew marveling at experiencing Comic Con.

Karaoke Versions of the Theme Song

Battlesaurs Animated Opening: (:50) This is what the cartoon opening would look like.

Deleted Scenes: (9:25) There are five scenes, each with an introduction. You have the option of a commentary. They are pretty much animated storyboards.

It’s tough to tell a story in 22 minutes. It’s even tougher to serve a collection of beloved characters in that story. This one takes the perfect balance of giving us a little of our favorites, filling in some character development for one we may not know that much, and introducing an entire collection of new characters. That’s a tough task for anyone… anyone but Pixar, apparently. They don’t believe in limitations. “Limitations are the shackles we bind to ourselves.”

Gino Sassani is a member of the Southeastern Film Critic's Association (SEFCA). He is a film and television critic based in Tampa, Florida. He's also the Senior Editor here at Upcomingdiscs. Gino started reviewing films in the early 1990's as a segment of his local television show Focus. He's an award-winning recording artist for Omega Records. Gino is currently working on his 8th album Merchants & Mercenaries. Gino took over Upcomingdiscs Dec 1, 2008. He works out of a home theater he calls The Reel World. Favorite films: The Godfather, The Godfather Part II, The Body Snatcher (Val Lewton film with Karloff and Lugosi, not the pod people film), Unforgiven, Gladiator, The Lion King, Jaws, Son Of Frankenstein, The Good, The Bad And The Ugly, and Monsters, Inc.
Some Kind of Hate Haven: Season 5, Vol. 1 (Blu-ray)