Posted in: The Reel World by Archive Authors on November 7th, 2015 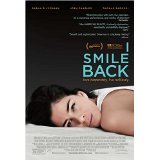 It is widely believed that the early 70’s was a great renaissance for American film. Part of the reason for this is that society was in upheaval, and the studios had lost their way trying to understand the American public. Young filmmakers were allowed to come in and do what ever they wanted. Sometimes it worked. Sometimes it didn’t, but there was real freedom in the anarchy of the times. Then movies like Jaws and Star Wars changed the industry again, and the money managers were back in control. Today, the studios run things based on formulas and templates. There are still interesting independent films being made, but they are strictly treated as fringe dwellers.

I Smile Back is a throwback to an old style 70’s classic drama in all its raw power. There are lots of interesting things to say about what’s happening here, but the big focus is the startling and attention-getting performance by Sarah Silverman. Silverman is well known as a comedian, and through that medium it was always obvious that she was bashing against the limits of what was acceptable and expected. Her subject matter was confrontation and abrasion, which she subverted through her charming good looks. It was always obvious she needed to branch out and explore beyond the somewhat limited confines of comedy. In I Smile Back, she has succeeded in an astonishing and spectacular fashion, but I really don’t want to focus only on Silverman’s performance. Everything she is doing is completely in sync with the style of the movie and the story that is being told. It is a harsh and raw exploration in every way. It is the story of a suburban Westchester housewife but without any Hollywood phoniness in its depiction. Music is used very sparingly. Scenes are constructed around awkward moments. All the cliche elements that we have seen in this type of movie have been stripped away. The connection to many 70’s movies is an unpolished feel we just don’t see much anymore.

I Smile Back is about mental illness, but not the obvious, easy-to-categorize kind. It is about someone who has spent a lifetime coping and sublimating the real problems.

Laney (Silverman) is a mother of two young children with an adoring husband, Bruce (Josh Charles). She is very devoted to her children and tries to do the very best job she can raising them. Throughout the movie many major problems reveal themselves. The movie goes over the line and then tries to recover and show restraint. This is the character of Laney always struggling to remain composed and in control even when she knows deep down she is broken.

Two veteran actors, Terry Kinney and Chris Sarandon, give remarkable turns in small supporting roles. In other words, the acting in the movie is impeccable throughout. But we do have to come back to Silverman. She is front and center, and she is fearless and near perfection. She does not for one second betray her history as a comedy performer. One has no reason to expect a performance this revelatory in an actress so untested. The performance is full of both excess and restraint. The portrayal is as real as anything you are likely to see on the screen this year. It is also probably something that many people can identify with. It is about a society in which drugs and sex are used to fill deep psychological voids. There is a core of self-destruction and mental illness that is rampant in a large part of society, even in those who seem least likely to be prey to weakness. To be a woman who lives a somewhat privileged life does not mean that you are free of internal struggles and hidden traumas. This film shows a very real struggle of someone trying to hold it together, knowing there is so much to lose.

The film is divisive, even among critics, but everyone does agree that Silverman has taken this opportunity and embraced every single moment for all its possibilities. She brings full range to all the colors of the struggles of this character. It is the best performance of the year from someone who isn’t even really an actor.