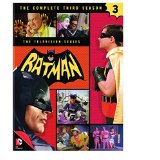 “Why, this is getting more farcical by the moment!”

It’s easy to point at the 1960s Batman TV series and laugh. For Dark Knight loyalists who insist their hero be gritty and tortured, the show is (at best) a campy amusement. At worst, it’s an embarrassing atrocity. The two most important things to note are 1.) the show is very much a product of the Swinging Sixties time period in which it was made, and 2.) the series is *supposed* to be funny. (Batman picked up an Outstanding Comedy Series Emmy nomination during its run.) Keeping those two factors in mind is crucial to enjoying this entertaining, monumentally bizarre run of episodes.

“Every day in Gotham City brings new superheroes, but this day is going to top them all. Although it begins none too differently, just wait…JUST WAIT!!!”

At first glance, not too much is different during season 3 of Batman. Millionaire Bruce Wayne (Adam West) and his youthful ward Dick Grayson (Burt Ward) — the other characters on the show routinely (and hilariously) refer to the protagonist as “millionaire Bruce Wayne” — fight crime in Gotham City under their alter egos, Batman and Robin. The series still features its rotating gallery of high-profile guest villains who turn up to wreak havoc and ham it up. (Not in that order.) And, perhaps most importantly, every fight with Gotham’s criminal element is still punctuated by the show’s signature POW!! BIFF!!! and ZOWIE! However, the show’s third — and final — season features a few notable changes

The Dynamic Duo becomes the Terrific Trio. (I can’t recall a show that was as fond of alliteration as this one.) Yvonne Craig joins the cast as Barbara Gordon, unassuming librarian and daughter of Gotham’s police commissioner (Neil Hamilton) by day, but caped crimefighter by nig…well, by the day also. (One of the sneakily striking things about this show is regularly seeing Batman in broad daylight.) Given that the show ended after this batch of episodes, it’s tempting to make Cousin Oliver comparisons with Batgirl.

But besides filling the screen time formerly occupied by Dick’s Aunt Harriet (actress Madge Blake only pops up for the briefest of cameos due to bad health), Craig is utterly charming and plucky as Batgirl. (Not to mention gifted with her own groovy theme music, and frilly, probably-sexist Batgirl Cycle.) She makes for a fine heroine, even if her presence has the unfortunate side effect of making Batman and Robin look somewhat hapless by comparison. (In order to pump up the character, there are numerous instances early on where Batgirl saves the Dynamic Duo or Barbara nudges an investigation in the right direction.)

Season 3 also featured stand-alone stories for the first time in the series’ run, so there wasn’t as much of a need for show creator/uncredited narrator William Dozier to implore us to tune in at the same Bat Time, same Bat Channel. There are still a handful of multi-part installments — including a three-part jaunt to London Londinium — but the majority of the episodes feature a self-contained caper followed by an uncredited cameo from the following episode’s Special Guest Villain.

“Evil is what makes the world go round.”

Batman easily has the best and most colorful rogues’ gallery of supervillains, and season 3 features the return of established favorites likes Cesar Romero’s Joker, Burgess Meredith’s terrific Penguin, and Frank Gorshin’s Riddler. Eartha Kitt makes her debut as Catwoman — taking over for the sensational Julie Newmar — during “Catwoman’s Dressed to Kill.” Since the established villains from the comic books could only pop up so often, the show created its own roster of baddies. Batman often secured its high-profile guest stars first and figured out their characters later, which means the quality tended to be uneven. Joan Collins makes for a fetching Siren, and Victor Buono as delusional King Tut and Vincent Price as Egghead are entertaining oddballs. On the other hand, Milton Berle’s Louie the Lilac, Ethal Merman’s Lola Lasasgne and Zsa Zsa Gagor’s Minerva (who guest stars in the final episode of the series) don’t really bring much to the table besides their star power.

I discovered the show at a young age through re-runs, so I didn’t appreciate how self-aware it was about its silliness. (One of Penguin’s henchmen wears a sweater that says “Henchman.”) West’s stilted delivery has been parodied to no end, but the actor deserves credit for saying some truly ridiculous lines with a straight face. Same goes for Ward, whose interjections this season included “Holy Hieroglyphics!” “Holy Hamstring!” “Holy Non-Sequitur” and “Holy Heart Failure!” Meanwhile, Alan Napier’s Alfred — who also becomes a confidant for Batgirl — is probably the cleverest one of them all. But even for a show in which Batman famously danced during the first season, this batch of episodes takes the insanity to exceptionally surreal levels.

We get to see Batman in boxing trunks as he squares off against the Riddler (“Ring Around the Riddler”) and swim trunks as he challenges the Joker to a surfing competition (“Surf’s Up! Joker’s Under!”) There’s also the part where he somehow disguises himself as a dinosaur (“How to Hatch a Dinosaur”). Every episode still features the aforementioned fist fights, but virtually all of them in this season seem to take place in the same soundstage with the same blacked-out background. The series was canceled after this season, so the final episode “Minerva, Mayhem, and Millionaires” unfortunately doesn’t make for a properly satisfying conclusion. The good news is there’s still plenty of fun to be had here.

Batman: The Complete Third Season features all 26 episodes on four discs. There is a fifth disc loaded with bonus material. The featurettes include “Hanging with Batman” (a profile of star Adam West), “Holy Memorabilia, Batman!” (pretty self-explanatory), “Batman Born! Building the World of Batman” (examines the impact of the TV series), “Bats of the Round Table” (a discussion featuring West, filmmaker/fanboy Kevin Smith, radio personality/comic Ralph Garman, actor Phil Morris, and DC Comics honcho/artist Jim Lee), “Inventing Batman: In the Words of Adam West” (the actor revisits some of the show’s original scripts), “Na Na Na, Batman!” (the cast of Arrow chimes in on the series), and “Bat Rarities! Straight from the Vault” (some screen tests and, best of all, the “pilot” clip that introduced Yvonne Craig’s Barbara Gordon/Batgirl).

I Smile Back Day 6