Posted in: No Huddle by Dan Holland on November 9th, 2015 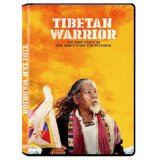 Tibet has been under Chinese oppression for more than fifty years. Recently, a wave of self-immolation has become a disturbing form of protest among Tibetan monks, with approximately 138 incidents since 2011. This alarming number of self-immolations is essentially the “straw that broke the camel’s back” for the filmmaker, as that is a theme that is brought up quite a few times in the peaceful protests depicted in this documentary. However, what earned this film a four-star rating is the nuances of a man’s journey to understand himself within the entirety of the Tibetan conflict.

Lotem Namling is an exiled Tibetan musician living in Switzerland. The increase in Tibetan monks’ self-immolation protests greatly disturbs him, so he begins a journey from Europe to India, dragging a large black coffin with the words “Free Tibet” painted onto its side. As Lotem’s journey progresses, the mentality behind his peaceful protesting seems to sink down into that of radical violence. Only through a meeting with the Dalai Lama does his anger and radicalism subside.

I’d have to say that my favorite thing about the film is Lotem’s on-camera presence. He is extremely charismatic and fun-loving. So much of the film focuses on his interactions with people rather than a long-winded explanation of Tibet’s history of being oppressed. While the first five to ten minutes of the film give you enough background information about Tibet’s history, it is Lotem’s earnestness that carries you through the documentary. His need for a personal understanding of the traumas suffered by the Tibetan people forms a unique viewing experience for audiences. Instead of listening to a textbook account of the events occurring in Tibet, you learn organically through Lotem’s personal thought process.

Something I would have liked to see a little more of is Lotem’s musical talent. There is a point in the documentary when a pop song begins to play over a montage of Lotem dragging his coffin, and it just feels so out of place. Lotem is an excellent musician, and at the beginning of the film, he claims that singing is something that he can do for his country. However, Lotem’s musical talent plays second fiddle (excuse the pun) for most of the film. Sure, he plays music for crowds, and he collaborates with other musicians, but he also cooks the food of his homeland to share. Rather than portraying Lotem as a “jack of all trades” when it comes to sharing Tibetan culture, focusing solely on his musicianship would have made the film ten times stronger.

In addition to the lack of Lotem’s original music, there are too many objectives to accomplish in the film. Lotem wants to march to Geneva with his coffin, but he also wants to spread the ashes of his mother along the way, or visit a place from his childhood and reminisce about his father. While these segments are compelling in their own ways, they largely take away from the film’s cohesive whole. This is not to say that the message behind the film is not coherent, but at times the message seems to lose direction. More often than not, when producing a creative, provocative, and politically driven work of art, less will always be more.

Regardless of my critiques, the film is very worth a watch: especially when Lotem attends Switzerland’s congressional decision to maintain a trade agreement with China. There is so much fantastic tension within that scene, and it is followed by an awkwardly tense interview with the Swiss Economics Minister that is the most eye-opening moment of the film. While the film’s message could have been delivered in a stronger way, I still received it. As a result, I’m interested in reading more about Tibet’s ongoing pursuit of human rights.