Posted in: No Huddle by Archive Authors on November 9th, 2015 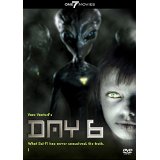 Our story follows Davide, a scientist who is trying to exorcise aliens out of the bodies of people who have been abducted. One day Davide is visited by a strange girl who says that she is possessed by an alien. Davide and his team look into it and are startled when they find out that this girl is royalty, and possessed by a leader among the aliens. I would love to give you more explanation, but after sitting through this movie twice, I still cannot make heads or tails of what is going on. I have never been so confused while watching a movie. The small bits and pieces I could understand were that there is a guy who is trying to use the human soul to force out aliens who have taken control of a host body. After that I know that the main character used the help of the Catholic Church in order to purify the host body which was taken over by the alien invader. This makes sense in a loose sort of way; church and soul go hand in hand I guess. Still don’t understand how barcodes are supposed to help purify the soul. Still don’t understand why the end scene needed to take place during a rave. Still don’t understand the entire end of the movie. Still don’t understand why heroin was needed to knock the aliens out. After sitting through this movie twice I could only connect two things, the church and the soul. There are times where there is something sexual happening, and it is almost completely unexplained, like when a possessed girl just kisses some other random girl with no lead-up or explanation as to why they are kissing. It seems like things are just sexual for the sake of being sexual, like when someone says ”just a little orgy between kids” in response to a group of our characters randomly making out to hide an alien. It feels as though at least thirty minutes of explanation was missing from this movie. I shouldn’t have been surprised though; the synopsis on the back of the DVD didn’t even make sense.

This movie is made even worse by the choice to dub all of the characters instead of giving them subtitles. Don’t get me wrong, I hate reading and watching a movie at the same time, because I feel a lot of the movie’s effect is lost when you are stuck at the bottom of the screen for most of it; however, if you choose to dub over a foreign language, you need to make sure that the audience can understand the characters. The horrible audio work is made worse when we are given an abundance of stock movie sounds that completely block out what a character is saying. There is a scene in this where someone is shooting a gun with a silencer, and we are treated to that good old silencer sound made famous by old James Bond movies, and that silencer’s sound is the loudest thing in this movie.

The camera work in this was just bad, seemingly in an effort to fit with the quality of the rest of this film. There are lots of shots where light from a window hides Davide, so only his features are visible. Usually this means that the character we are looking at is either mysterious or powerful; Davide is neither of these, so the shot has no purpose. There are a lot of effects that are also unnecessary, like an HUD display filling the screen when Davide takes someone out of hypnosis. The effect doesn’t make me think that I am looking through the eyes of an alien, and it doesn’t show anything more significant by being added.

It is not very often that I am at a loss for words when describing a movie, but this is one of those times. This movie is bad. I can’t talk about the actor’s performances, because they are almost completely hidden to try to make the dubbing more natural. Everything else in this movie is just indescribably bad. Avoid this movie at all costs. Please.