Posted in: No Huddle by Jeremy Butler on November 13th, 2015 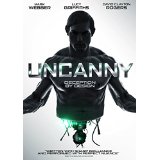 Uncanny is definitely an apt title for this science fiction film: a story that deals with possibly the most realistic artificial intelligence entity ever created, in the realm of this film’s universe that is. The impact of this film will likely be dampened due to the release of a recent realistic science fiction drama that will not be named. In the beginning, the film did not fully capture my attention as I had an idea of how things were going to play out. That said, what I imagine could not have been further from the reality. It is rare that a film catches me off guard, and it is also a pleasant surprise when it does. So in that regard, my hat is off to this film.

Reporter Joy Andrews (Lucy Griffiths, Constantine) is selected to conduct a week-long interview with genius and recluse David Kressen (Mark Weber, Scott Pilgrim vs. the World) a pioneer of technology said to have created something unlike anything ever seen. Their interaction gets off to the rocky start as the two size each other up and Joy remains unimpressed with Kressen until he reveals his innovation: Adam (David Clayton Rogers, Jane By Design), a fully functioning artificially intelligent humanoid. After the revelation Joy becomes fully engrossed with the story, and the trio spend a great deal of time together.

Before long, Joy and David begin to grow closer, something that does not go unnoticed by Adam, who begins to exhibit characteristics that unnerve Joy and alienate David. Things quickly come to a head in a twist that will make you look at the experience in a new light.

As I said earlier, this film did not have my full attention at first simply due to my own assumption about where the plot was heading. Let that be a cautionary tale about judging something so quickly. Character-wise, I believe the actors fit their roles nicely. Griffiths is warm and displays intrigue and intelligence as the techno-savvy journalist; I thoroughly enjoyed the way Weber showed the controlled and smug nature of genius that was at first prickly but took on a sweeter tone as the story progressed. The acclaim, however, goes to David Clayton Rogers in my opinion, because as Adam he was monotone and child-like and is the most convincing in his role.

The story develops at a good pace and does not spend an intolerable amount of time on any particular subject. There are some pretty keen philosophical elements address such as the reasons behind people’s actions, desires, and motivations, which all in my opinion come to fruition in the twist. I don’t want to give too much away in regards to the twist, but I will say that you will definitely play back earlier interactions in the film back in your head after the revelation. If you are anything like me, you will likely be kicking yourself for not discovering it sooner.

In conclusion, Uncanny is a worthwhile watch in my opinion, especially if you have an interest in science fiction and artificial intelligence. It was very well done in my opinion for a low-budget picture. The location rarely changes with the exception of a few scenes, which I feel works well for the overall premise. As far as the twist goes, the film is definitely worth seeing just for that.

Jeremy Butler is a film school graduate of the International Academy of Design and Technology. He is been writing for Upcomingdiscs since 2012; however, movies have played a big part of his life for much longer. Favorite genres include horror, science fiction/fantasy, and comedy. Favorite movies are V for Vendetta, Boondocks Saints, Kiss Kiss Bang Bang, and The Godfather.
Terminator: Genisys (Blu-ray 3D) Breaking Through