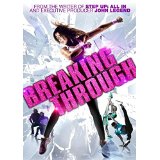 “Their channels have millions of subscribers. Their videos have billions of views. They are the future of dance.”

The definition of “making it” as a dancer has shifted over the years. Movies have dramatized this struggle by having its hoofing heroes struggle to earn street cred, gain admission into some prestigious dance academy, or make noise on Broadway. But thanks to social media and websites like YouTube, wannabe dance sensations can take a more DIY approach to stardom. The best parts of Breaking Through brush up against that notion, but too much of the film gets drowned out by groan-worthy dance flick cliches.

Casey Wright (Sophia Aguilar) is the leader of a dance crew with smooth moves and inventive choreography. Unfortunately, the number of views on their latest YouTube video is tragically low. While Casey dreams of making it as a dancer, she toils by day at a seemingly dead-end job in an electronics store. Her mom (Julie Warner) wants her to consider a position in the store’s corporate office, which represents the path to a more secure — but infinitely less fulfilling — career.

“What is the point of chasing your dream if it’s not the real you that catches it?”

Just as Casey and the rest of her crew seem ready to move on from their dance dream, she is approached by Quinn (Jay Ellis), a talent manager who was impressed by one of their videos online. The partnership leads to better production values and a greater number of views. But as the crew’s stardom begins to plateau, Casey is torn between giving the fans what they want and staying true to herself.

The film counts Grammy winner John Legend as one of its producers and boasts a partnership with DanceOn, which conducted an online search for the talent that appears in this movie. As a result, Breaking Through looks somewhat slicker than your average low-budget dance flick, even if it doesn’t achieve the delirious scope of a Step Up finale. That reminds me, Breaking Through writer-director John Swetnam also penned the last installment in the Step Up franchise, so he knows this world quite well. Unfortunately, Swetnam also seems incapable of resisting dance flick tropes (you’re not going to believe this, but Casey eventually splinters from the rest of her crew) and overwrought melodrama (one of Casey’s female crew members is drunkenly humiliated because of Casey’s neglect, and Casey has a witchy work nemesis who vanishes halfway through the movie).

The filmmaker is more successful when he shows us how young artists — many of whom are fundamentally insecure teenagers — can become obsessed with chasing “Likes” from the faceless public horde at the expense of their own identity. Breaking Through also flirts with showing us the mechanics of how people become YouTube stars, but ultimately yada-yadas the process by pushing platitudes about “creating your own brand.” (That doesn’t stop the film from often feeling like a commercial for YouTube and DanceOn.)

Swetnam does deserve credit for being smart enough to know where to put the camera…and stay out of the way. The dance scenes in Breaking Through are largely set to funky, inoffensive grooves. (In other words, nobody really gets served.) The sequences get glossier and more ambitious as Casey’s crew’s star power continues to rise, but my favorite moments were the simplest ones. That includes a goofy, joyous car dance sequence and a spry, sensual dance between Casey and fellow (friend-zoned) crew member JJ (Jordan Rodrigues) that has some genuine heat. All of the musical numbers — including Casey’s terrific performance at a climactic dance showcase — feature long takes that really emphasize the performers’ abilities.

Aguilar, a real-life YouTube phenom, is obviously connected to Casey’s plight and has enough star power to carry her through the most cliched moments. The rest of the cast is largely comprised of other online stars (Les Twins cameo and perform as themselves) and reality show alums (like So You Think You Can Dance alum Robert Roldan, who plays a member of Casey’s crew). I also appreciated that Swetnam largely resisted the temptation to make Ellis’ Quinn the sort of one-dimensionally greedy talent scout we typically see in these movies; the actor also shares a pleasing spark with Aguilar.

Like virtually every other dance flick in history, Breaking Through only really comes alive during the moments when its stars get to strut their stuff. The movie features a handful of impressive sequences, but (ironically) nothing that’s likely to blow up on YouTube.