A Pigeon Sat on a Branch Reflecting on Existence

Posted in: No Huddle by Archive Authors on November 17th, 2015 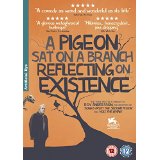 A Pigeon Sat On A Branch Reflecting On Existence is the title of a Swedish film that won the top award at Venice Film Festival. Many critics think it is one of the best movies of the year. It is also a movie that relatively few people will see. The main reason most people won’t see it is because it is an extremely odd film. It could be called boring and fascinating in the same breath. The film is made up a series of master shots depicting events that have very little narrative clarity. Some characters show up periodically but with little sense that their actions have any potency or potential purpose. The title suggests an underlying philosophy of existential confusion. The pigeon is only depicted briefly twice in the film, but the idea is that a pigeon would have very little understanding of human behavior. The film also shows that human beings have very little understanding of human behavior. The various people who float through the movie all seem disconnected to anything that is happening to them. This is the final film in a trilogy by Roy Andersson including You, The Living (2007) and Songs From The Second Floor (2000). It is staged like a series of mini-plays with the characters barely moving in many instances, seemingly caught in some surreal dream. Many events don’t seem to relate to others, but two hapless brothers are the most noticeable. They sell novelty items (vampire teeth with extra long fangs, laugh bags) because they want people to have fun. No one in this movie has any fun for even one second. The film is somewhat funny, depicting characters that are hopelessly grim and disconnected, but there are some moments that are bleakly horrifying while they are hallucinatory and confusing. The most obvious and chilling example is a group of slaves being led into a giant rotating drum that is sitting on top of a fire pit that has been set ablaze. It is done by soldiers for a group of finely dressed elderly people staring on dispassionately, totally unaffected by the horror. Another setting is a bar populated mostly by women who are suddenly besieged by the Swedish king and soldiers from two centuries earlier. They institute and implement edicts that long ago lost their relevance. The clear intent of the director is to confuse and alienate a modern audience with an uncomfortable pace and sense of unsettling illogic.

This is clearly a film that is only for seekers of unusual art. Some people will want to see it a few times to decipher the strange tableaux. There is a unique beauty to the crazy display of static boredom, but the average moviegoer will certainly walk away confused and alienated after the first viewing. The film is for sophisticated tastes, but is not easy to recommend to anyone. Intellectuals will respond to the droll absurdity that outlines a society that is dead but still attempting to exist in a zombie-like fashion. The message is subtle and open to interpretation, but it clearly shows modern life as hopelessly suffocating.

It is a unique and singular experience but is so elusive at times that it is difficult to say anything about it with any kind of certainty.

I have spent the entire review basically warning you. If you are up for an unusual but somewhat evasive experience, then you should definitely see this. Everyone else, you have been warned.

Getting On: The Complete Second Season (Blu-ray) Tuesday Round Up: November 17, 2015