Getting On: The Complete Second Season (Blu-ray) 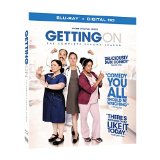 The geriatric care wing of a hospital — where the employees are undermanned and overworked, and many of the patients are in a near-catatonic state — is not the most obvious sitcom setting. That’s partly the reason it took me a while to warm up to the first season of HBO’s Getting On, an adaptation of the British series of the same name. The biggest drawback, however, was that those initial episodes didn’t seem very interested in shaking the grim specter of the original show. But what a difference a year makes!

Before I get into all the ways Getting On improved during its second season, let’s do a quick summary. The show is exclusively set within the Billy Barnes Extended Care Unit at Mount Palms Hospital in Long Beach, California. The staff includes Dr. Jenna James (Laurie Metcalf), the unit’s spectacularly off-putting and self-centered director of medicine. Dawn Forchette (Alex Borstein) is the eager-to-please head ward nurse who is a professional doormat for Dr. James and a romantic doormat for on-again/off-again flame Patsy de la Serda (Mel Rodriguez), the unit’s supervising nurse/resident stickler. Finally, there’s overwhelmed, underpaid DiDi Ortley (Niecy Nash), who remains the most openly compassionate staff member.

The show’s entire first season was essentially comprised of mildly remixed storylines from the BBC series. Although season 2 of the American Getting On still includes some nods to its predecessor — including a fanatical obsession with hand-washing protocol — this batch of episodes is largely the creation of co-creators Mark V. Olsen and Will Scheffer (Big Love). As a result, the show feels vibrant and more alive — as opposed to coming off like comedy karaoke — while still retaining the bone-dry absurdity of the original. The improvement reminds me of the noticeable leap in quality the American version of The Office took during its sophomore outing.

Season 2 of Getting On successfully builds upon some of the stronger points established early on. For example, Dr. James’ maniacal obsession with funding various research studies — this year, they include an exploration of fecal incontinence, and the distance between a mouse’s genital and anus — leads to her aggressively installing a new hospice program in the ward, which proves to be a financial boon. (Turns out hospice is a “growth industry”; the comparatively swanky rooms are called “comfort suites.”) The show also takes Dawn’s tragicomic romantic misadventures and adds a layer of depth by incorporating a life-changing wrinkle to her relationship with Patsy…before deftly pulling the rug out from under everybody. (Borstein excels at both the “tragi” and “comic” parts of Dawn’s character.)

Overall, the actors seem to possess more ownership over the characters. Each of them are pretty terrific, but the standout performance is Nash’s warmly sturdy work as DiDi. (In somewhat of a delightful surprise for such a low-profile show, the actress picked up an Emmy nomination this year.) DiDi is the character who remains the most tethered to the outside world — we meet her opportunistic half sister in Ep. 5/“The Revolving Door Admit” — which is essential because Getting On never leaves the hospital. She’s also the most relatable; her big goals this season are to get the raise that she’s entitled to (a whopping 28 cents/hour) and install a pool in her backyard.

And on much simpler terms, season 2 of Getting On is more outwardly comedic. There seems to be more slapstick (including a reclining hospital bed mishap) and physical comedy (Dawn hilariously making sure the motion sensor-activated lights in the Ladies room stay on) in this batch of episodes. (The one false note was Dr. James shaking a patient back to life in the finale/“Doctor Death.”)There are also more obvious one-liners and turns of phrases, like a patient claiming “You said I’d drive off with a brand new vulva” and Dr. James saying, “He was quite pleased to sink his teeth into vaginal atrophy” with a perfectly straight face. Guest stars this season include Jean Smart as the flustered daughter-in-law of a patient with dementia, and Alia Shawkat as a cheery hospice volunteer. There is also the return of June Squibb’s bipolar (and profane) patient Varla, and the continued presence of Ann Guilbert’s Birdy Lamb, a wily, long-time extended care patient who might outlive them all. (Not to mention the minor pleasure of having Ricky Jay pop by as an overworked doctor to say, “We’re not magicians.”

The season ends with a scandal surrounding the hospice program that brings the four main characters together. It’s a fitting conclusion since one of the biggest jokes in Getting On is how the patients they’re supposed to be caring for largely take a backseat to administrative butt-covering and co-worker crises. (The season’s highlight is probably Ep. 3/“Turnips…North Day…Yes, Yes”, in which the hospital’s computer network goes down.) Getting On displayed potential during its initial run, but it wasn’t until season 2 that it became TV’s premier deadpan/bedpan comedy.

Getting On: The Complete Second Season is presented in its original aspect ratio of 1.78:1. The 1080p image is arrived at with an AVC MPEG-4 codec at an average of 21 mbps. As with the first season, this HBO Blu-ray nicely captures the show’s gloomy, desaturated palette. The notable exception is a brief excursion to the hospital’s roof in the finale, which offers a sunny respite. This is a solidly sharp presentation with perpetually chilly tones. (You can see precisely how much makeup the lead actresses *aren’t* wearing, and you can spot the pools of sweat all over DiDi when the air conditioning goes down in Ep. 3.) The entire first season is presented in a single disc, but since the six episodes only clock in at a shade under 180 minutes there are really no compression issues to report. The staff at the Billy Barnes extended care unit doesn’t do a pretty job, so it’s not surprising to find that Getting On (intentionally) doesn’t offer a very pretty HD picture.

The DTS-HD Master Audio 5.1 track once again offers completely clear dialogue, minimal background noise in the rears…and little more. (Besides solid separation within the front channels.) The rears, in particular, aren’t as active as you might expect considering there are always people and hospital instruments in the background. I was actually struck by how much the show — and the track — embraces silence, allowing certain barbed lines of dialogue or poignant moments hang in the air.

Deleted Scenes: (15:12) Every episode has a batch of deleted scenes, or you can use the Play All option. The standout moments for me included a redux of the comically inept communication between the staff and a deaf patient, and the painfully uncomfortable revelation that Dr. James and some of her colleagues take part in a morbid office pool.

Gag Reel: (7:01) Your typical collection of flubbed lines and stumbles, except that the frustrated profanities here aren’t bleeped out since this is HBO. For what it’s worth, this gag reel features better-than-average editing and some funny improvised riffs. (Along with “dead” patients accidentally coming to life in the middle of a take.)

Getting On: The Complete Second Season features all six episodes on a single disc. The sitcom is one of several current HBO comedies that have gotten better with age. (See, Veep and Silicon Valley.)

The show’s third (and final) season premiered earlier this month. You may not be in for an extended stay, but I still suggest you check into this hospital comedy before they turn the lights out for good.

Christmas Trade A Pigeon Sat on a Branch Reflecting on Existence