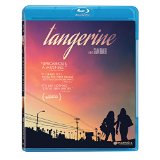 Tangerine is a rather interesting comedy that is very reminiscent of Robert Altman’s ensemble comedies of the 1970’s. The film’s writing is especially intelligent given the contemporary issues it addresses, such as: transgendered women, prostitution, the entertainment industry and how it affects the lower class. Most of these issues are not directly addressed; they are represented in very minute but profound ways. While I really appreciated a lot of the concepts within the writing and a lot of the directorial choices, I did not enjoy this film as much as I had hoped to.

Two transgender “working girls”, Sin-Dee and Alexandra (played by transgender actresses Kitana Kiki Rodriguez and Mya Taylor, respectively), live out an eventful Christmas Eve in the hot Los Angeles sun. Sin-Dee, having just been released from prison, discovers her boyfriend (James Ransone) has cheated on her and decides to take matters into her own hands. Meanwhile, Alexandra desperately tries to recruit audience members for her performance the same evening. Finally, Razmik (Karren Karagulian), an Armenian cab driver who has a crush on the girls, sacrifices a family dinner to be involved in the heated climax.

Tangerine was made in collaboration with Duplass Brothers Productions, a fact that turned me onto the film in the first place. I have been a huge fan of the Duplass brothers ever since their film The Puffy Chair, and even though they are only credited as executive producers, certain elements of the film definitely feel as if they have a Duplass touch. This can primarily be attributed to the amount of tension in the climax of the film. However, I have very mixed feelings about the film which prevent me from deciding whether I actually like it or not.  On one hand, the film very intelligently and coherently nods to a theme that “nothing is as it seems”. On the other hand, it lacks a great deal of substance.

In regards to the theme of “nothing is as it seems”, the quote above is an excellent representation of what the film is. Los Angeles is, for the sake of argument, a nicely wrapped lie. Hollywood is the land of show business, promising the good life to all who enter. However, this film shows us the underbelly of that beautiful promise. Transgendered women also can be included in the theme of things are not as they seem, as well as the Armenian family man who can only derive sexual pleasure from engaging in sexual activities with them.

However, I believe the larger point encompassing the entire film is that, to this underground, everything is as it seems. At one point in the film, the cab driver Razmik invites a prostitute in his car, but chases her out upon learning that she is not transgender. For Razmik, transgender is the norm, placing the “hetero-normative” prostitute among the people believing in the beautifully wrapped lie. As a matter of fact, it would seem that residents of the underground are completely unaware of the “lie” that the majority speaks of. By spending a good majority of the time with Sin-Dee and Alexandra as they interact with other prostitutes and drug addicts, you begin to sympathize, and subsequently synthesize, with the underground beneath the beautiful wrapping paper. The fact that the film cast actual transgendered actresses, as opposed to actresses roleplaying transgendered women, really emphasizes that message.

Where I love the film for being a conduit for complicating the hetero-normativity of Hollywood, I just can’t fall in love with it as an actual film. The alternating storylines were an excellent directorial choice, but the stories themselves dragged on and on and consisted of rather weak character development. Each character had a single defining trait throughout the film, and those traits were never challenged until the very end. So rather than watching characters develop over time, you watch characters act the same way throughout the film (the main duo’s mannerisms do become quite annoying), and their change happens almost immediately with no consequence.

The film itself looks absolutely gorgeous. A lot of great handheld work by cinematographers Sean Baker and Radium Cheung; it was probably my favorite part of the movie. Also, an excellent performance by Jason Ransone, as I believe he was the funniest character. Overall, I really loved how the film made me think critically about the characters. I was just very disappointed that the characters themselves were not very complex, given how they were written to develop.