Posted in: No Huddle by Archive Authors on November 18th, 2015 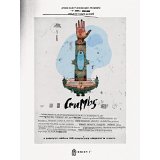 Crumbs is a film that has many unique elements to offer. It is a mixed bag like most films. It is a small independent, post-apocalyptic science fiction set in Ethiopia whose main character is probably under four feet tall. Candy (Daniel Tadesse) is a scavenger in alternately desolate and overgrown landscape. Candy lives in an abandoned bowling alley with his beautiful partner, Birdy/Seyat (Selam Tesfaye). A giant spaceship has hung in the sky for decades, seemingly inoperable but starting to show new signs of activity. Candy finds artifacts which he barters for survival. These artifacts are silly remnants of pop culture like toys, sneakers, and record albums referencing forgotten icons like Justin Bieber, Michael Jordan, and Michael Jackson. There is chaos and confusion in this world but only in the most oblique ways. The message of this parable is slight and elusive. It is more an exploration of Ethiopia than it is anything else. There is a clear sense of allegory and metaphor, but only a sense. It is a short film of 68 minutes, because it really doesn’t have a lot to say. Its viewpoint can be summarized by saying that in a post-apocalyptic future our possessions will lose their meaning. Toys will seem like totems, and people will become symbols for a time we no longer understand or remember. Nazism and Santa Claus will have an equal weight in this desolate, arid, and depleted future. Writer/Director Miguel Llansa also includes two strange, avant-garde, Third World shorts that both run under 10 minutes. Chigger Ale takes place in the same bowling alley as Crumbs and a dingy dance club. It celebrates Ethiopian dance and fun, but its main character is a classic outsider not interested in fun. The diminutive Daniel Tadesse is an angry and silly man who wears Nazi uniform and phony Hitler mustache. He is eventually rescued by a sexy Nazi from outer space.

Night in the Garden takes place in a remote mountain cabin where a strange man in a white wig and novelty glasses takes to a somewhat disapproving and disembodied God voice.

There is also a six-minute collection of anecdotes form the director about the making of Crumbs which are more instructive than the movie itself. I actually wish this part of the DVD was longer so it could illuminate more of the philosophy of the film. A prologue at the beginning of Crumbs describes a similar world to the film Children of Men in which humanity has given up caring about its future. Crumbs is only 68 minutes long, but even at that length it feels aimless and unfocused.

I keep coming back to the landscape, which is a combination of Venus and Mars. We all know our future is probably apocalyptic, but it would be nice to see something different for a change. Wouldn’t it be nice to see a utopian future for once?

I don’t mean to fault this little and somewhat enjoyable film, but it scavenges from much bigger and more expensive films. Crumbs is picking the bones of our collective post-apocalyptic, dystopian imagination, but with a small, weak, and impotent hero.

It is an interesting but slight and small movie that, like its hero, goes on a long and hopeless journey for meaning that ultimately finds no answers.

Tangerine The Man From U.N.C.L.E.