Posted in: No Huddle by Jeremy Butler on November 19th, 2015 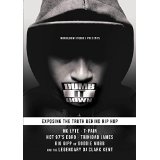 Dumb it Down turned out to be a bit of an indictment on the state of present hip-hop affairs. A group of experts was brought together, both past and present industry professionals who gave their opinion on how the art form has transformed from a way for a person to express their thoughts to apparently the new tactic in advertising.  As a fan of the genre, there is no denying that the music has changed from what it was originally. Admittedly, I find myself gravitating more towards songs with an actual message behind them rather than the club bangers (as they have come to be called). However, I have my doubts about the way this documentary is going to go over.

The overall question for this documentary is how it will be received by the audience. A scathing indictment of the industry by participants who knowingly admit that they took part in the dumbing down of the art form that they are now speaking out against. The hypocrisy of that admission, I imagine, is going to do a significant amount of damage with the audience. T-Pain came out and admitted that he dumbed down his own lyrics so that they would be better received with the listeners; however, he then turns around and talks about how doing such a thing is what wrong with hip-hop today. That contradiction weighed heavily with me as I watched the documentary, because how can you really speak out against something that you took part in? I understand that it is possible to have a change of heart, but that was not my first impression when I witnessed this admission. It seemed more like a “pass the puck of blame” scenario. There are plenty of others who speak out as well, but again I have to wonder how many of them participated in what they are now speaking out against.

That said, I do share some of their opinions on the present state of hip-hop. Despite my first interpretations of this film, I was able to overcome my initial feelings and see some the points that they were making. There are fewer and fewer compositions expressing the emotion that the artist’s is feeling, and more songs featuring a catchy phrase and a dance on the airwaves today.  I would like to view the film as a call to arms for reforming the art form. Right platform, wrong execution, in my opinion, as there was plenty of finger-pointing, which is not going to accomplish the prescribed goal. The wrongdoings are irrelevant; it should be about what needs to be done in order to succeed in the desired goal.

Despite reservation about Dumb it Down’s execution, I do believe that the intended message is of importance, and I would recommend hip-hop fans to watch. Only knowledge can be gained, and perhaps it will alter the way you view the genre. I do not imagine the documentary will appeal to larger music demographic, as it is centralized around the one genre. If you do not enjoy hip-hop in any form, I do not believe that this is the disc for you.

Jeremy Butler is a film school graduate of the International Academy of Design and Technology. He is been writing for Upcomingdiscs since 2012; however, movies have played a big part of his life for much longer. Favorite genres include horror, science fiction/fantasy, and comedy. Favorite movies are V for Vendetta, Boondocks Saints, Kiss Kiss Bang Bang, and The Godfather.
The Man From U.N.C.L.E. Two Men in Town (Blu-ray)