Posted in: Disc Reviews by Jeremy Butler on November 18th, 2015 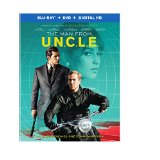 Its spy vs. spy in Man from U.N.C.L.E., or at least it starts out that way. Henry Cavill and Armie Hammer play Napoleon Solo and Illya Kuryakin respectively in this reimaging of the popular television series from the 60’s. Guy Ritchie is at the helm of the spy flick, which should give everyone high hopes that this will become the first film in a franchise. Though a bit dry at times, Man from U.N.C.L.E. proves to be a clever and engaging movie that stays true to the era it is set in. There is enough action, espionage, and beautiful women to capture the attention of the male audience, and the female audience is likely to be sated just being able to stare at Cavill and Hammer as a suave, well-educated, gentleman and a terse, committed, albeit volatile patriot. I’ll leave it to the ladies to determine which is which.

The film takes place after World War I; Napoleon Solo is a reformed criminal working off his sentence as the C.I.A.’s most effective operative. Solo ventures into Soviet territory in order to make contact with and extract Gaby Teller (Alicia Vikander, Ex Machina), the daughter of a nuclear scientist believed kidnapped to exploit his expertise. While carrying out his mission, Solo crosses paths with KGB’s top operative Kuryakin, whose mission it is to stop him. At odds, the two battle wits as well as weapons in an exchange Solo ultimately wins.

Both operatives think that’s the end of confrontation. They could not be more wrong, as their prospective employers have entered into an arrangement that will have the two working together as partners in order to foil a potential terrorist plot. OK, now that we all have a brief overview of the movie, let’s get to the portion you all most want to know about: is the movie any good? While it won’t be winning any awards, and it’s most likely not going to win the weekend in my opinion, I will say that it is a worthwhile experience and an entertaining one.

I can’t say with any certainty how closely the film follows the original series; given that it appears to be an origin story I’m going to say that it probably deviates a bit. First piece of advice: think of this as more of a reimagining rather than a recreation. If you do that, you are far more likely to enjoy the story. That means loyal fans of the television series are going to have to disregard much of the established dynamic. I know that is asking a lot, but I assure you that if you can do that you will find plenty to like about the movie once you get over the initial shock of watching the Lone Ranger throw around the Man of Steel.

I saw some real chemistry between Hammer and Cavill; the two had a great back-and-forth when they were at odds and especially when the two had to work together, best example of this being when the two have a sidebar discussion of what to do with a potential defector. Their dynamic was very good; however, I must say that Hammer did outshine his counterpart. Hammer truly embraced the role and made it his own in my opinion. Fine example of this being when he was forced to listen to a recounting of his upbringing, the subtle face twitches and mannerisms brought focus to the volatile nature that rested underneath the carefully controlled exterior (sorry, ladies, I answered the earlier query of who was the volatile one). That said, Kuryakin’s outburst did become tedious towards the end, not to mention a bit overdone.

I enjoyed the overall flow of the story, and Ritchie did include cutbacks to earlier scenes to provide previously unknown details; however, I would have loved to have seen a bit more action. I must admit my disappointment at the concluding fight scene at the end of the movie. I was expecting a bit more hand-to-hand combat than I got. I will also felt like an opportunity was missed with another exchange between the two lead characters, though I do understand why the makers chose to go down that road. But it would have been nice to see nonetheless.

The Man From U.N.C.L.E. is presented in its original aspect ratio of 2.40:1. The 1080p image is arrived at with an AVC MPEG-4 codec at an average 30 mbps. This high-definition image presentation reveals the stylish hyper-look of the theatrical film. In many instances you’ll find heightened and vivid colors. There’s nice contrast in the early scenes from the cold winter drab of the East Germany action. In both cases the image remains sharp revealing glossy detail. Black levels are quite good, offering deep inky blacks and solid shadow definition. The nighttime boat chase is an excellent example of detail emerging through what could have been a murky mess. Textures are subdued by the shiny sheen of most of the film. They do come out more early on.

The Dolby Digital Atmos converts to a nice 7.1 track on systems that are not set up to take advantage of the new system. This allows for some very fine surround moments that do a good job of immersing one into the action. There are plenty of explosive sub moments that deliver deep and full sound. Dialog is still where most of the audio presentation is focused. You’ll hear it all just fine. The score is actually best with a few high string moments that pierce through the sound field quite pleasantly.

Spy Vision: (8:34) This feature is all about the style. It should be expected when the director opens with a statement that he doesn’t particularly care about authenticity. This isn’t so much about the 60’s, but a romantic style found more in certain films of the era. A lot of this is about the clothes.

A Higher Class Of Hero (7:13) This one is all about the car actions and stunts.

Motorcycles – Proper And British: (4:59) This one is about the bike and a trip to the factory.

The Guys From U.N.C.L.E.: (4:57) A feature on the two main cast members. They talk about their characters while others talk about casting the duo.

A Man Of Extraordinary Talents: (3:14) A Guy Ritchie love fest filled with guitars and chess.

There are also a handful of scene-specific features all under two minutes each.

In conclusion, Man from U.N.C.L.E. is a worthwhile picture that I would be willing to see again and will purchase when it becomes available. I encourage others to see it as well as long as they remember to view it as a reimagining. Loyal fans of the series may not like the deviation; however, I maintain that they will find something to like about the film. Not your typical action movie, but still worth a look.

Jeremy Butler is a film school graduate of the International Academy of Design and Technology. He is been writing for Upcomingdiscs since 2012; however, movies have played a big part of his life for much longer. Favorite genres include horror, science fiction/fantasy, and comedy. Favorite movies are V for Vendetta, Boondocks Saints, Kiss Kiss Bang Bang, and The Godfather.
Crumbs Dumb It Down