Posted in: The Reel World by Jeremy Butler on November 20th, 2015 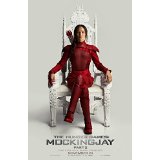 As always, the performances were fantastic as each member of the cast has perfected their version of their character. One thing I noticed that differed from the others is that Gale’s arc is much more significant than in the previous films. We get to spend more time with this character, who has been more of a background character in the first couple of films. He was present, but not much focus was spent on him until the previous Mockingjay film; this time around, however, he is addressed more, and he has more interaction with the rest of the cast. Hemsworth takes the responsibility head on and brings out a wide range of emotion, especially towards the conclusion in a pivotal scene with Jennifer Lawrence. Speaking of Lawrence, it goes without saying that she has essentially became the complete embodiment of Katniss Everdeen, and it is next to impossible to imagine anyone else ever playing her. This is an emotional film for her character as well, as she pretty much (like her counterpart) carries the entire situation on her shoulders.

Lawrence and Hutcherson’s chemistry continues to be the backbone of the film as they spend most of the story in the opposite of the previous films. The thing that drove the plot for the other films was no matter what the situation, Katniss always had the knowledge that Peeta loved her to drive her forward and to get her sane; however, their relationship is the opposite now, as her most trusted ally is now the biggest threat to her safety. Despite the antagonistic nature between them, their connection is still palpable. Their first interaction where Peeta voices his regret for the action that started their connection really hits home.

In conclusion, there is little doubt that this film will lead the box office, but much more than that, it will leave fans with a resolution that they can appreciate. We have followed this group on their journey for years, but now it’s time for it to come to an end. Though I am saddened that it must, I am grateful to have received it in a way that I can be at peace with.

Jeremy Butler is a film school graduate of the International Academy of Design and Technology. He is been writing for Upcomingdiscs since 2012; however, movies have played a big part of his life for much longer. Favorite genres include horror, science fiction/fantasy, and comedy. Favorite movies are V for Vendetta, Boondocks Saints, Kiss Kiss Bang Bang, and The Godfather.
Two Men in Town (Blu-ray) Secret In Their Eyes