Secret In Their Eyes

Posted in: The Reel World by Archive Authors on November 21st, 2015 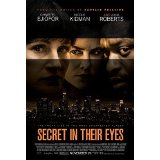 The Secret In Their Eyes is a heavily plotted and intense police thriller, but there is much more to discuss about this film than that. The film has a lot of issues, both in the story and in the making of the film itself. One of the issues is the casting. We have two of the grand dames of cinema facing off for the first time, Julia Roberts and Nicole Kidman (which is surprising, though Nicole did co-star with Sandra Bullock once, which is close enough). If you detect a tinge of sarcasm, you are correct. Not to be sexist or ageist, but what those two actresses always sold was vibrancy and excitability. Here they are toned down and depressive. That is what their characters in this film should project, but the effect is awkward. There is a large degree of range and intensity required here that is hard to pull off, and I don’t want to fault these actresses, but I do have some issues with them. It is a very emotional and complicated story that requires all kinds of subtle shading. I don’t believe either actress aced the subtleties. But let’s move on.

This is a remake of a highly regarded Argentinian film of the same name from 2009 that won the Oscar for best foreign film. When a foreign film is particularly successful, it is natural for Hollywood to use it as an easy blueprint for a big-budget draw for top A-list talent. That is what happened here, and, in fact, the remake is pretty close in story and structure to the original, but there is a considerable difference in tone and execution. Even if this current version with big name actors is good, I think everyone will say that the original is better. There was a different political backdrop as well (Argentina’s “Dirty War”), which is handled a little awkwardly in the American version by focusing on external terrorist threats instead. Part of the complexity of the story is conflicting law enforcement agencies butting heads over jurisdiction and the resulting obstacles to the solving of the case.

The Secret In Their Eyes is a murder thriller that takes place over a period of 13 years with numerous flashbacks taking place back and forth throughout the film. It gets confusing to keep track of the flashbacks, because the main clue that we have a shift in time frame is that some of the characters have a little gray hair when they are older. This does not help a viewer with a story that is already somewhat complicated and full of red herrings.

The cast includes Dean Morris (Breaking Bad), Michael Kelly (House of Cards) and Alfred Molina (Law and Order: LA), but the real heart of the film is Chiwetel Ejiofor (12 Years A Slave). He is the heart of the investigation and is driven by a complex series of motivations, including unrequited love. By the end of the movie, I still did not understand all his motivations.

I like the current Hollywood version as a twisty Hollywood thriller, but I am disappointed that the film didn’t hit all the heights that it was shooting for. I know Julia Roberts probably thinks this is an Oscar nomination for her, but I don’t think so. Just because a character is in a daze throughout much of the movie, that doesn’t mean I want to see that in one of our most beloved screen icons. Roberts looks all glassy-eyed and mopey except for a few intense moments. As far as Nicole Kidman is concerned, I’m not even sure her face is capable of emoting any more.

The Hunger Games: Mockingjay Part 2 By The Sea