Posted in: The Reel World by Archive Authors on November 22nd, 2015 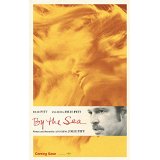 By The Sea is literally like a vacation. It is a beautiful time that is a little over two hours at a picturesque resort. It is an exquisite location with lovely views. By The Sea is a beautiful little movie. It is small and nice, but it has two very big stars, Brad Pitt and Angelina Jolie. Angelina Jolie Pitt has written and directed the film and has co-starred with her husband for the first time (because Jolie was not married to Pitt when they made Mr. and Mrs. Smith). It is clearly something that is very important to Jolie and is probably very personal to her. I will get back to speculation about Jolie and her intentions.

The film starts with a drive through gorgeous countryside in a very expensive sports car. Roland (Pitt) and Vanessa (Jolie) seem somewhat inscrutable, somewhere between sullen and curious. They talk sparingly but pleasantly. They arrive at a very remote, exclusive, and ornate old world hotel that rests on a rocky ocean inlet in Malta, which is an island in the middle of the Mediterranean. Roland is a writer who has had some success in the past, and Jolie admits to doing very little at all. They check into a spacious suite and go about setting up the room for a long stay. Roland goes off to write every day but really only spends time drinking in the bar downstairs. Jolie mostly stays in the room and on the balcony. A young couple moves into the room next to theirs after a few days. At one point, Vanessa discovers a hole that allows her to spy on the young couple. These very basic elements develop over the course of the film, which leads to a catharsis and climax of sorts.

The film has been attacked by many critics, and I don’t think it’s fair, partly because I think the critics are looking at this the wrong way. This is a very special film which I enjoyed and I am glad to have seen. It is a boring film by design. I think Jolie specifically wanted to make a movie that no one makes any more. This has been rumored to be her last starring role. It is extremely clear that this film is very important to Jolie deep down to her core. The fact that a film like this doesn’t get made any more is because very few people have the clout to pursue something so clearly outside the norm of Hollywood product. It harkens back to the days of Italian neo-realism of the 1960’s and the French New Wave. A good portion of the film is in French with subtitles. Brad and Angelina knew what they were doing when they decided to do this film. It is possibly a glimpse of their marriage.

The film is basically about depression and inertia. The supposed inspiration and impetus for Jolie to create the film was the death of her mother. The reason for the depression in the film is different, but I get a sense that Angelina is a somewhat depressed person in real life. I know. Oh, poor Angelina. But depression is a very real thing and doesn’t necessarily discriminate between the rich and the poor.

I think there are worse ways to spend two hours that going to see By The Sea. It is boring, but it is also pleasantly enjoyable.