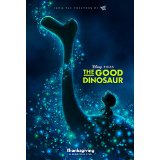 “You’ve gotta earn your mark by doing something big…bigger than yourself.”

It was actually 20 years ago this month that a certain animation studio made an indelible mark on cinema. When Pixar released Toy Story in November 1995, it was the very first computer-generated animated feature, and it made us believe that movies really could go to infinity…and beyond! In the ensuing years, the studio has produced an unprecedented and unparalleled run of films that mix breathtaking technical wizardry with inventive stories that touch moviegoers’ hearts along with their funny bones. The Good Dinosaur, Pixar’s latest effort, gets about half of that equation right.

The Good Dinosaur is based on a provocative hypothetical: what if the asteroid that wiped dinosaurs off the face of the Earth had instead harmlessly bypassed the planet? The question opens up an unlimited number of story possibilities, and the film settles on the notion that dinosaurs would’ve evolved to the point where they became farmers and herders. The decision gives the movie a laid-back, Western vibe that runs counter to the manic entertainment usually aimed at children.

Henry (voiced by Jeffrey Wright) and Ida (Frances McDormand) are Apatosaurus farmers with three children: precocious Libby (Maleah Padilla), doltish Buck (Marcus Scribner), and gangly runt-of-the-litter Arlo (Raymond Ochoa). As fraidy cat Arlo struggles with his fear of, well, everything, Henry patiently tries to get his youngest son to tap into his inner strength. One lesson involves ridding the family farm of a pesky critter, which turns out to be a feral human named Spot (Jack Bright). After the lesson takes an inevitably tragic turn, Arlo embarks on an adventure that tests his mettle.

Then again, that’s not how the story was originally supposed to go. The Good Dinosaur has followed a particularly bumpy path to theaters. Sure, plenty of animated flicks have replaced a director and shifted release dates. (This film was initially slated for November 2013 and then got pushed last summer before getting bumped again; Good Dinosaur‘s delays are the reason we got zero Pixar movies in 2014 and two this year.) However, far fewer high-profile films significantly overhaul their own story to the point that a (now former) cast member refers to it as being “dismantled and re-imagined.”

But even if you weren’t aware of the project’s tumultuous history, the story’s shortcomings would still readily apparent. The Good Dinosaur features very little of the ingenious world-building that has become a signature of Pixar films. (Even the relatively-maligned Cars flicks featured oodles of imaginative touches in creating a world where vehicles ruled the Earth.) To be fair, this movie aims to tell a more straightforward, dramatic story…I just wish it hadn’t almost completely squandered a killer premise to do so. The primary benefit of moving the action forward “millions of years” after the asteroid near-miss is having Arlo interact with Spot; otherwise, Pixar could’ve basically told the exact same story — which echoes The Lion King more than once — without setting it in an alternate universe.

I completely agree with a fellow reviewer’s observation that The Good Dinosaur feels like a concept for a Pixar short got stretched to feature-length. (Speaking of animated shorts, this film is preceded by the charming and kinetic Sanjay’s Super Team, which blends Hinduism and heart and feels more like a traditional Pixar offering.) Of course, Pixar’s specialty prior to Toy Story was computer-animated, short-subject films because the technology hadn’t yet evolved to the point that it could realistically produce a feature-length movie. Technical shortcomings are absolutely not an issue with The Good Dinosaur. In fact, the most impressive part of the movie is the stunningly realistic background and landscape work, which jumps to another level when you watch the movie in 3D. The technical mastery is especially crucial given the role nature plays in the story. (Arlo is afraid of storms, and the movie conjures up an effective, genuinely creepy “reverse-Jaws” effect with some pterodactyls in the clouds during the final act.) Yet even those astonishing visuals are somewhat undermined by the comparatively cartoonish appearance of Arlo and others.

Speaking of Arlo, the character doesn’t make for a particularly compelling coward. His growth and maturation feel inevitable rather than earned. The most effective scenes revolve around Arlo’s relationship with Spot. (The movie’s best joke was assigning pet qualities to the human character.) Arlo and Spot’s bond inspired a lot of howling among young moviegoers on their way out of a recent screening, and I suspect that trend will catch on. Even with all the cast upheaval — McDormand was the only voice actor who was retained — there also aren’t very many particularly strong vocal performances. The exceptions are Sam Elliott’s gruff, unmistakable drawl as Butch (a Tyrannosaurus herder looking for his longhorns), Steve Zahn as a whacked-out pterodactyl named Thunderclap, and Peter Sohn (the film’s director) as Forrest Woodbush, an even more scattered Styracosaurus.

The brief scene with Forrest is one of the few times The Good Dinosaur brushes up against the surprising, inspired zaniness of Pixar’s best efforts. Not surprisingly, the movie has a characteristically worthwhile message. Whereas Inside Out reminded audiences earlier this year that Sadness is an acceptable (and integral) part of growing up, this film reinforces the notion that fear should be channeled rather than totally suppressed.

In the end, the movie pretty much lives up to its title. The problem is that this Dinosaur is merely good, when we’ve come to expect greatness from Pixar.

Ricki and the Flash (Blu-ray) Creed