Ricki and the Flash (Blu-ray)

Posted in: Disc Reviews by Archive Authors on November 25th, 2015 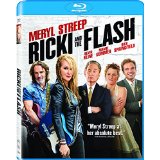 I’m going to start by listing a number of names that make up a kind of extended family. The names don’t have a lot in common at first, and it seems like a hodgepodge. I’m sure I’m going to leave someone out, but let’s start with Kevin Kline, Johnathan Demme, Diablo Cody, Sebastian Stan, Mamie Gummer, Audra McDonald, Joe Vitale, Rick Springfield, Bill Erwin, Bernie Worrell, Rick Rosas, and Charlotte Rae. I’m forgetting someone. Oh yeah, Meryl Streep. It’s that kind of a movie which is being sold as a star vehicle for the most praised and beloved actress of the modern era, but is really an ensemble piece. We can debate who is as beloved as Meryl Streep in the history of cinema, but let’s not, because Ricki and the Flash is not that kind of movie. It really isn’t about the star turn by Meryl, but a collective, communal experience by all involved. All the names I mentioned are part of this experience, more so than in most movies. It’s about the connections we try to make and the ones we fail at. It’s about reaching for things and not getting them but doing it anyway. It’s about failure and celebration, often within a breath of each other. It’s about moving on but not forgetting the past. It’s about loving someone when they are far from perfect. It’s about forgiving and accepting.

I’m going to start with Rick Rosas. He died before the film was released and plays the bassist in Ricki’s band, the Flash. In real life, he played in three bands with Neil Young (Crosby, Stills, Nash and Young, Crazy Horse, and Buffalo Springfield) as well as with Joe Walsh, Ron Wood, Etta James, Jerry Lee Lewis, and Johnny Rivers. Bernie Worrell, who plays the keyboardist, was a founding member of Funkadelic and Parliament as well as playing with The Talking Heads. Joe Vitale is the drummer; he has played with The Eagles, Joe Walsh, Ted Nugent, Dan Fogelberg, Crosby, Stills and Nash, and many others. Ricki and her band play to a few die-hard faithfuls in Tarzana every night, as well as doing her day job as a cashier at Whole Foods. I should mention that her frazzled boyfriend and lead guitarist is Rick Springfield. I should also mention Streep is 66 years old and is singing Bruce Springsteen and Tom Petty.

Ricki left her family to pursue her dream, and her family is not thrilled. They gave up on her years ago, but she has been called back because her daughter is having a nervous breakdown. The daughter, played by Mamie Gummer, Streep’s real life daughter, is fantastic, and she gives her mother a run for her money, stealing all the scenes she’s in. Julie (Gummer) is a complete bipolar wreck, dealing with the breakup of her engagement. Kevin Kline is the well-to-do father, hoping that the long-missing mother might have a positive influence during this trying situation. His new wife (McDonald) is away taking care of her ailing father. I should mention that Audra McDonald has won six Tony awards and is considered the greatest Broadway musical performer of her generation. McDonald doesn’t sing in the movie. I should also mention that director Jonathan Demme directed three musical documentaries on Neil Young, as well The Talking Heads, Robyn Hitchcock, Bruce Springsteen, and The Pretenders. He also directed Silence of the Lambs and Philadelphia. It is written by Diablo Cody, who won an Oscar for her first film, Juno. Then at the end, during a great big wedding, Charlotte Rae (Different Strokes) shows up as a tiny little white-haired woman who is the grandmother of the groom. Sebastian Stan (Captain America, The Winter Soldier) is the groom.

Ricki And The Flash is presented in its original aspect ratio of 2.40:1. The 1080p image is arrived at with an AVC MPEG-4 codec at an average 35-40 mbps. The high-definition image presentation gives us quite a sharp image with plenty of details. There’s almost an element of grain to the picture that makes it look more like film. Black levels are above average but don’t necessarily deliver inky blacks or fine definition. Colors are pretty natural, and flesh tones are reference. The close-ups deliver some of the finest detail, unfortunately revealing the age on both Streep and Springfield.

The DTS-HD Master Audio 5.1 is usually there to serve the dialog. But there is a lot of music to be found here, and you’ll find it CD quality or better. I’m disappointed in the dynamic presentation of the music scenes as well as a somewhat weak sub response. Surrounds are minimal and might have been better used in the club scenes to bring us a more immersive environment. Someone let up on the switch here, and we end up with a very average audio presentation.

Deleted Scenes: (7:50) There are four with a play-all option.

The Making Of Ricki And The Flash: (10:01) As I suspected, this is a Streep love-fest. Everyone marvels at how well she played the songs, when in reality her guitar acting was pretty bad. She had a standard one-finger chord style while banging her pinkie on and off the frets. It’s fine, and the film covers it for the most part, but I hate these kinds of extras that try to sell us something that’s pretty obviously not true.

Rediscovering Rick Springfield: (5:28) Now here was some real guitar playing. This feature looks at how he was cast and the work he did with the film’s band.

I could go on about lots of small pleasures that fill this movie. It’s all very low-key, relaxed and comfortable. It’s not trying to be a big Oscar movie despite having a killer performance by Streep (who would have thought). It’s about making a fun, happy, feel-good movie that is about people who keep going even though everything isn’t always going so great. You can still have fun even though life stinks sometimes. I left the movie in a very good mood. Rock on!