Amy Schumer: Live at the Apollo

Posted in: No Huddle by Archive Authors on December 2nd, 2015 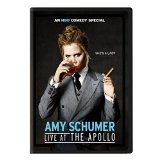 I’ve reviewed Amy Schumer before she become a mini-phenomenon. She seemed a little desperate and cheesy, but now she is worshipped for being the cutting edge of comedy. I think the cutting edge of comedy is a little cheesy and desperate in general. I remember the first time I saw Amy was on the tail end of a Comedy Central roast of Charlie Sheen, and she was a self-described nobody at the time.  Not long after, Comedy Central decided to make her a somebody. Her show, Inside Amy Schumer, had many flashes of brilliance that were embedded in gross-out humor full of sex and gender issues. That is the heart of what makes Amy Schumer special. She is willing to explore somewhat suppressed areas of gender politics in a subversive manner. She comes off as something of an idiot, but that is the state of sex relations in this day and age. Her humor is overt and tries to claim equal ground with men. Men are generally considered to be chauvinist and complete idiots, so to claim equal ground, you would have to be an idiot as well. Her humor is playful and good-natured but with some hidden sharp edges.

Amy’s ascendency has been cemented recently when Judd Apatow added her to his roster of protégés as the producer and director of Trainwreck, written by and starring Schumer. Apatow has a string of hit comedies but is also the producer of the HBO show Girls, which promotes another young female role model, Lena Dunham. Both Dunham and Schumer share the same attitude of postmodern frankness.  While we are trying to catch up on all things Schumer, I should also mention that she is a niece once removed of the powerful and long-standing US Senator from New York. The two Schumers have done joint press conferences on gun control after 12 people were shot and killed at a Trainwreck screening.

In this essay, I will be discussing Amy Schumer Live at the Apollo, clearly only a small part of the Amy onslaught. In the special, Amy mentions that she’s been doing standup for over 11 years. Amy has also been doing acting roles while continuing her writing. Madonna and Jennifer Lawrence both seem to love the heck out of her, which is why she toured with Madonna and is co-starring and writing an upcoming Lawrence flick.

Describing Amy’s humor is a delicate matter. Amy has described herself saying, “I go in and out of playing an irreverent idiot”. That is a telling remark which would explain why it is hard to be sure if she is being excruciatingly honest or broadly satirical. She seems to own her gender in much the same way as a man would. I mean that as a compliment, since she is erasing a general perception of male dominance. In her way she sees categories as being increasingly irrelevant. Amy seems to be saying is that if men can be disgusting pigs, so can women. I should say that Amy speaks only for herself, but it is resonating with a female audience. Of course, men like her too, because she promotes the old free-love model.

Amy Schumer Live at the Apollo is funny enough for a standup comedy special, but let’s face it. Standup comedy specials are a dime a dozen. I see this as a mere part of a multi-pronged media onslaught. Amy is a media whore, and I mean that as a compliment. She is working the system, and to do that you have to be one big media whore. I will be reviewing the third season of Inside Amy Schumer next, so I’ll have more to say shortly. That’s me being a media whore and a tease on a much smaller scale.

One more thing; I am a little confused as to why Amy Schumer is playing the Apollo, which is at 125th street in New York City, but the numerous audience shots show that everybody looks like they live much further downtown.

P.P.S. The funniest bit is the closing bit. Who would have thought?