Posted in: No Huddle by Archive Authors on December 10th, 2015 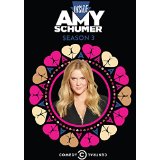 Inside Amy Schumer is satire. The definition of satire is the use of irony, humor, exaggeration, or ridicule to expose and criticize people’s stupidity or vices, particularly in the context of contemporary politics and other topical issues. Satire, frankly, is not always very funny. I don’t find Schumer terribly funny, but she can be at times. I do think she is spearheading discussions of numerous issues. So how you judge Schumer can depend on what you think is important. It can also depend on where you stand on the issues she brings attention to, or whether you might even be a target of her satire.

This is the third season that I’m reviewing that has gotten some of the highest praise from critics. When they do that, they should at least acknowledge some of the juvenile thrusts of the material. I have no problem with sophomoric and juvenile humor, but the subversive undercurrent is far from clear sometimes. One of the most mentioned skits is the “Twelve Angry Men” skit. It is a clear homage to the Henry Fonda movie, but rewritten to decide the fate of Amy Schumer. Is she hot enough for TV, basic cable, or whatever? It suggests she might be put to death for her transgression of non-hotness. They have no problem pushing the limits of absurdity or the limits of basic cable.

Amy’s subversive subtext is clearly gender inequality. That includes a hot-button issue in Hollywood right now, which is pay inequality. It is mostly a very real thing, although there are always those women who are aggressive and tough and can hold their own. I would probably cite someone like Angelina Jolie. Men are idiots. That is a general rule, and I doubt most men would claim to be sensitive or fair or decent or easy to get along with. So it certainly deserves to be addressed. The problem I have is with the general sloppiness of the show. It tries to be aggressively stupid at times, which I think is part of the point. It shows that girls can be just as silly and vulgar and callous as the stereotypical man. The other problem is that I am not a stereotypical man. I consider myself somewhat sensitive and understanding to all the world’s problems, and there are many problems in this world. This world is not a one-problem place. Gender politics is one of many, many problems. Schumer tends to be a one-issue woman, and her material seems to be born out of insecurity. She seems to be fighting through her own deep fears. She may not be the most attractive woman in the world, but why does Kevin James get hot women in all his movies? (Kevin is a target more than once, and he certainly is an easy target, no matter how you want to look at it.)

In the extras are some additional interviews and deleted scenes. The interview scenes are some of the best parts in the series, and two of the best were left in the bonus section. I am not condemning Amy with faint praise, but I think it is best to not overpraise her until she does better work.