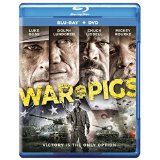 “In a war, there’s really only two things that are gonna ruin your day…officers and orders.”

The concept of duty — particularly giving and following orders that will almost certainly result in death — is at the forefront of War Pigs, a straight-to-DVD actioner that doesn’t actually have that much action in it. For a movie with the likes of Dolph Lundgren and Chuck Lidell gracing its Blu-ray cover, scaling back on the butt-kicking seems like a death sentence. However, I was surprised to find the action sequences were actually the weak link in this limited but reasonably entertaining World War II yarn.

Lt. Jack Wosick (Luke Goss) has seen his share of death during WWII, most notably during a mission in which he ignored orders that saved many lives…but still resulted in some haunting casualties on his side. Still reeling from his latest trauma, Lt. Wosick is approached by the unconventional Col. A.J. Redding (Mickey Rourke), who comes bearing a highly-dangerous mission. Col. Redding wants Lt. Wosick and French Legionnaire Capt. Hans Picault (Lundgren) to enter Germany and gather information on one of Hitler’s rumored “wonder weapons.”

To accomplish this mission, Lt. Wosick is assigned command of the War Pigs, a rag-tag group of American soldiers unofficially led by mouthy smart-aleck Sgt. August Chambers (Noah Segan). The War Pigs are largely distrustful of authority and initially bristle at their new authority figures before rounding into shape. But after their mission goes sideways and a pair of War Pigs are captured, Lt. Wosick has to decide whether to follow orders and relay the information…or raise some hell by going back to save his two men. I know I mentioned earlier that War Pigs has less action than you’d expect, but I’m pretty sure you can still figure out what Lt. Wosick decides to do.

The movie opens with a brief skirmish — this is where the curiously-underutilized Lidell pops up to personify the reason Lt. Wosick is traumatized by war — but then surprisingly shifts its focus to character for the bulk of its 88-minute running time. Besides Lt. Wosick’s current demons, Capt. Picault is granted a tragic backstory and the War Pigs are actually allowed to have personalities. Of course, each of these characters represent some sort of overly-done archetype, but the performers here do a good job keeping things lively.

The best parts of War Pigs involve the bonding sequences when Lt. Wosick and Capt. Picault are trying to whip their loosey-goosey unit into shape. (The training includes rope climbing, knife fighting, and a surprising model for their drawing lesson.) They’re streets ahead of the battle sequences, the first of which features distracting green tracers for the bullets. The action once again ratchets up during the bullet-riddled finale, but it’s not as effective as the scene where the two captured War Pigs are being tortured. Once again, that’s due to the movie dedicating some time to building up its characters…even the annoying ones.

Goss — a veteran of straight-to-DVD action fare — carries the film ably and manages to sneak hints of charisma into his sad sack character, which help make him a believable hero. Lundgren’s French accent comes in and out, but he remains an imposing presence and still possessess his effortless action-hero star quality. Out of the War Pigs, Segan makes for quite an effective pest.

To be clear, War Pigs is a thoroughly ridiculous movie. Rourke, for example, brings a breezy nonchalance to his three scenes, but it’s clear the actor told someone “There’s no way I’m cutting my hair” to play his World War II colonel. The sloppiness extends to the action sequences, but director Ryan Little was smart to de-emphasize those. (Although budgetary restrictions may have made the decision for him.)

War Pigs is presented in an aspect ratio of 1.85:1. The 1080p image is arrived at with an AVC MPEG-4 codec at an average of 36 mbps. The gunmetal gray, perpetually-overcast palette fits most on-screen depictions of Nazi Germany. The desaturated image — which, naturally, also mixes in a healthy dose of Army green — offers an impressive amount of fine detail. The most notable examples are the nice bits of texture on the War Pigs’ uniforms, and the hard-earned lines on the faces of Rourke and Lundgren. There aren’t any notable instances of aliasing, banding, artifacting or other blemishes, but this picture also isn’t exactly what I’d call a showstopper. Instead, this a solid effort, especially when you consider the limited resources compared to larger-scale war films.

The DTS-HD Master Audio 5.1 track is where you go to find your showstopper. This is a wonderfully active and vibrant sound field that helps bring the action on screen to life, even when the bullets aren’t flying. (A scene between Lt. Wosick and Col. Redding in a tent features background chatter in the rear speakers.) Of course, the track absolutely explodes to life once the action does pick up. There’s terrific directionality with bullets pinging from one speaker to the next and even with an airplane flying up above. Speaking of combat vehicles, a tank that the War Pigs commandeer brings a low, room-rattling rumble courtesy of the subs, which also pipe up any time a grenade goes off. War Pigs might have less action than I expected, but this track makes absolutely sure those scenes count.

Think of War Pigs as a poor man’s Dirty Dozen or a much lower-budget Expendables. (With very little of the star power from either of those rag-tag war films, despite the presence of Expendable co-stars Lundgren and Rourke.)

It sounds like an insult, but I think it’s a reasonably good result for this straight-to-DVD flick. I can’t recommend you rush out and grab this one, but you could certainly do worse if you’re looking for a quick, no-frills action fix.

Some Kind of Beautiful (Blu-ray) Inside Amy Schumer: Season 3