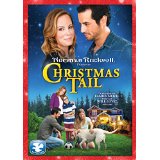 Baby here again. Yeah, I’m the Shepherd/Chow that runs the whole operation here at Upcomingdiscs. I give the orders and everyone jumps. OK, I made that last part up. You know who does jump? It’s those UPS and Fed Ex guys who keep trying to deliver stuff here. They’re getting a little too cocky, if you ask me. The problem is that no one around here asks me anything. The only time I get asked for something is when a dog film comes into the house. Then Gino puts on the charm. Me, I think it’s racial profiling, and I’m not standing for it any more. Besides, lying down just feels a lot better anyway. The movie is called A Christmas Tail. It’s a kind of play on words. You humans think you’re so clever. But if it weren’t for those thumbs …

The movie actually starts out with the pretty solid idea that dogs make great Christmas presents. At least that’s what Jack (Cupo) thinks when he gets his daughter a dog they name Bear for an early Christmas present. Of course, she loves Bear even if he isn’t a Shepherd/Chow mix, and it looks like happily ever after, right? One of the neighbors takes exception to Bear digging in his front yard. So he calls the dog police and has him sent to a shelter where Maggie (West) is also looking for a dog for her son for Christmas. Hey, I’m a dog, and already I knew where this was going. So while Jack is looking for Bear, Maggie and her son now have a new dog named Paisley Of course, it’s the same dog. When they finally meet, they decide to share the dog but keep the name Bear. He dodged a big one there. I guess Baby was already taken.

You know what’s going to happen here. A little bit of puppy love is going on, and I don’t mean for Bear. Maggie and Jack start to fall for each other, and the kids are pretty up for the idea. That doesn’t mean it’s all Milk Bones and belly rubs for these guys. Maggie has a bad ex-boyfriend who is trying to get back in, and at work there’s a guy stealing her ideas to get a promotion over her. See, we dogs have a simple way to determine who happens to be in charge. And that spells B I T E. She does have a cool job. She comes up with ice cream flavors for a creamery. She’s done that too, but I don’t think anyone paid for it. I just see these big tubs of ice cream coming in from a guy named Matt. Hey Matt, next time how about something for the dog!

This is predictable stuff, but it’s all harmless family fun. It’s the kind of thing you can watch with your own kids and pups and enjoy it for a little while. But I do think the dog did a better acting job than most of the people. Jack and the ex-boyfriend Chance are horrible. It looked like they were reading from a sheet of paper. Heck, I can do better than that. You should see my “can’t climb the stairs because I’m too weak” act. Gets them every time. (Gino doesn’t read this stuff, right?) The only one who did a pretty good job was Chandra West. She was pretty much the best actor in the movie and made the other guys all look worse. I think it was because she liked working with the dog. That’s my story, and I’m sticking with it.

For me it meant more time in the home theatre with my own family. And when it comes to Christmas dreams, “It’s just what I always wanted”.

Baby was a German Shepherd/Chow mix canine reviewer at Upcomingdiscs from 2010 until 2016. She was also chief of security here with her Baby On Board Security side-business. And that spells F A N G S.
Mission: Impossible — Rogue Nation (Blu-ray) Holiday Gift Guide Spotlight: Barron’s Educational Series Books