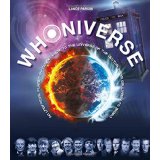 I think I see your problem. You have this list. It’s a list of people you need/want to buy a Christmas gift for. The trouble is that they’re into home theatre, and you don’t know Star Trek from Star Wars. You couldn’t tell a Wolf Man from a Wolverine. And you always thought that Paranormal Activity was something too kinky to talk about. Fortunately, Upcomingdiscs has come to the rescue every Christmas with our Gift Guide Spotlights. Keep checking back to see more recommendations for your holiday shopping. These gift guides ARE NOT paid advertisements. We take no money to publish them. Maybe someone on your shopping list loves movies and loves books. The best place I can offer you here is the folks at Barron’s Educational. I’ve seen two books from them this shopping season that you really want to check out. The first we’ve already talked about. The second is for that Dr. Whovian on your Christmas list.

The first thing you need to know is that the book isn’t laying the claim that these are the very best films ever made. It merely includes movies that for some reason or another demand to be experienced at least once in your life. Many are included because of the influence they have had on those that came after. And while these films might seem primitive by modern standards, we wouldn’t have the modern standards without them. Others are included because of some groundbreaking milestone the film measures in the industry. Many are included because of how much they have invaded our pop culture. The movies span all genres, all nations, and all subjects. Each capsule gives us a short description of the film and a brief presentation of the reasons for its inclusion here. The capsules range from very short paragraphs to two-page spreads. There are 75 contributors, so the writing styles vary considerably. The book includes hundreds of wonderful stills from these films and is one of the more informative books I’ve encountered in the last decade.

I’m very pleased that there appears to be no discrimination over genre or the country of origin. The collection of films here is appropriate for any true connoisseur of the medium. For the most part, the writers are knowledgeable about their subject and provide just enough about each film to whet our appetite, which is the true purpose of the volume, not that I need much pushing to watch more movies. There are rare gems here that will have me searching the rare video lists out there to check out. Unfortunately, they did not give consideration to availability, and while I would never condone resorting to bootleg copies, I’m afraid that’s the only way you’ll ever see some of these titles. It’s likely impossible to see all of these movies, but it will be fun trying. That’s what makes this book so enjoyable, if a bit of a tease.

The book is an excellent value. It’s heavy and substantial, clocking in at nearly 1000 pages. For each movie you’ll get vital cast and crew information as well as Oscar nominations. English translations are provided for foreign films. Nearly ever film sports at least one photograph.

I really do think this is one of those books that belong on every serious videophile’s reference shelf, and I know that it will enhance mine for years to come. Consider it required reading from this course on filmography. There are genre-specific titles that I hope to be able to share with you in the future. The new edition editor is Ian Haydn Smith, and he’s literally “throwing down the gauntlet for you to choose your own movies to die for”.

Years ago Douglas Adams wrote a terribly famous collection of books called The Hitchhiker’s Guide To The Galaxy. They’re still somewhat of a cult favorite among fans who are forever thankful they understand the meaning of life, the universe and everything. I mention these books because the bear two important connections to Dr. Who. Douglas Adams also penned episodes of the original Dr. Who series and the styles of the narrative share a lot in common. Maybe it’s a British thing. The second connection has to do more directly with this book. Whoniverse can be best described as a hitchhiker’s guide to the universe of Dr. Who. It contains very detailed information of all of the interesting places and times that have been visited by the Doctor. It touts itself as, “An official planet-by-planet guide to the universe of The Doctor from Gallifrey to Skard”. That’s a pretty daunting task. Dr. Who is the longest running science fiction series on television in the entire world. There are over 1000 episodes that date back to the 1960’s. The Doctor himself has been played by 13 different actors in that time. The Peter Cushing film appearances are not considered Dr. Who canon and are not included here. But if a Doctor was there, you’ll find something about it here. The information provided is how it all relates to The Doctor. After all, he’s the most important being in this universe…or any other.

Now, the book does not claim to be here as a technical manual which gives you all of those scientific descriptions and properties of these places. It’s all in the context of The Doctor himself and offers basic information only. For those of you who want more, the book has it, but not in that kind of details. You get whimsical trivia from these episodes and more photos than I’ve ever seen in a Dr. Who book. Surprisingly, few pictures of the man himself. All of his enemies are here and those exotic places and times that made the show what it remains today. Yes, it takes you right up to the current Doctor, Peter Capaldi. The book includes wonderful timelines that put these various visits and encounters into a more linear condition for our easy reading. The full-color photos are absolutely amazing. Many are rare, and they serve up a pictorial history of The Doctor as well as you’ll ever find.

It looks like a rather short read, but I was absorbed for hours in the pictures, text, and diagrams. It’s a hard book to put down. Actually it’s a hard book to hold. It has a solid cover and sports nearly 300 pages. It’s an odd dimension at 10 inches in height and 9 inches in width. It weights over a pound and a half. This will be one sweet heft gift for the Who fan on your list. The only way to learn more is to become a companion. The book takes us to the end of the universe. Of course, “The Doctor wouldn’t let something like the final end of the universe put a stop to things”.

Gino Sassani is a member of the Southeastern Film Critic's Association (SEFCA). He is a film and television critic based in Tampa, Florida. He's also the Senior Editor here at Upcomingdiscs. Gino started reviewing films in the early 1990's as a segment of his local television show Focus. He's an award-winning recording artist for Omega Records. Gino is currently working on his 8th album Merchants & Mercenaries. Gino took over Upcomingdiscs Dec 1, 2008. He works out of a home theater he calls The Reel World. Favorite films: The Godfather, The Godfather Part II, The Body Snatcher (Val Lewton film with Karloff and Lugosi, not the pod people film), Unforgiven, Gladiator, The Lion King, Jaws, Son Of Frankenstein, The Good, The Bad And The Ugly, and Monsters, Inc.
A Christmas Tail Tuesday Round Up: December 15, 2015