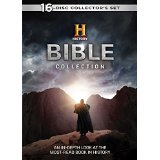 I think I see your problem. You have this list. It’s a list of people you need/want to buy a Christmas gift for. The trouble is that they’re into home theatre, and you don’t know Star Trek from Star Wars. You couldn’t tell a Wolf Man from a Wolverine. And you always thought that Paranormal Activity was something too kinky to talk about. Fortunately, Upcomingdiscs has come to the rescue every Christmas with our Gift Guide Spotlights. Keep checking back to see more recommendations for your holiday shopping. These gift guides ARE NOT paid advertisements. We take no money to publish them. A&E/History have sent some cool sets that we’ll also be giving away during our 12 Days Of Christmas Giveaways.

Well…here it all is. Every episode of the first eight years including the Deck The Halls Christmas Special. You get 18 DVD’s in all so this is a big present for the Duck Dynasty fan who wants to keep all of his ducks in a row. That means hours of Phil, Si, Willie and Jase. That also means hours of terrific guest stars and crazy antics. You can give someone the business…the family business… the Robertson family business, that is.

“Meet the Robertson clan. They turned duck calls into a multi-million-dollar empire.  But running a family business is tough when the family just wants to run wild.”

The Robertson family is quickly becoming the most recognizable family on TV, considering they are flooding the stores with their books, DVD’s, and many other products you can find at Wal-Mart.  I can’t help but think this is a family that is doing everything right, and good for them for the success they’ve managed.

Seeing a positive reality show is refreshing, and the fact that it’s not filled with backstabbing and manipulation just allows it to stand out from everything else.  Every episode continues to try to deliver some life lesson or attempts to show the value of a wholesome family environment.  Is it hard to relate because we’re following a multi-million dollar family?  Surprisingly, this might be the most relatable family to hit the TV screen.

But getting to the heart of the show, what makes this show work is how well this family seems to pull together for good times and bad.  Sure, people can hate on the show because people just have a problem with the Robertsons and their beliefs, but what you can’t take from them is that they genuinely care for one another.  To glimpse the lives of others while we can sit in the comfort of our homes as we watch the drama or silly antics unfold where we can connect or simply see things we can’t imagine happening with our families is the appeal of reality television.

In the end, though, the show continues to deliver some good laughs and some fun life lessons the entire family can enjoy.  This isn’t the show that could take me away from Breaking Bad or Under the Dome, but it’s still something worth giving a shot when you have some empty space on the DVR or simply want some fun, light entertainment.  For me this is a guilty pleasure that I can’t help but look forward to seeing what shenanigans the family gets into next.

It seems that the Good Book has been pretty good source material for television these days. Several television and film projects have come our way in recent years. The Bible is always going to be a tough subject. You’ll have the anti-religion critics complaining about the material along with many devout followers who will take offense with any dramatic liberties taken with the material. If you think the recent fight over the authenticity of the latest Steve Jobs movie was brutal, just imagine what happens when you start playing with people’s fundamental beliefs. It’s a hard tightrope-walk to make, and History appears to have accomplished that rare feat.

In 2013 husband-and-wife production duo Mark Burnett and Roma Downey teamed up to bring The Bible to the History Channel. The 10-episode series gave as a whirlwind tour of the milestones from the Bible and brought about some critical acclaim along with solid ratings. It aired during Easter/Passover season. It was certainly an ambitious project and left the team feeling they could do more with the project. The sequel did not air on History, but they’ve had their share of Bible documentaries. Now an entire group of them have been gathered in one place. The collection contains 16 discs of Bible programming. You get episodes from Mysteries Of The Bible: The Bible’s Greatest Heroes, Mysteries Of The Bible, The Execution Of Jesus, God vs. Satan: The Final Battle, Bible Stories From The Old Testament, Bible’s Secrets Revealed, Mary Of Nazareth, Jesus: His Life, Christianity: The First Two Thousand Years and both parts of Banned From The Bible.

Whatever it is that you believe, there is no doubt about the impact of the Bible on our nation’s history and present. Our leaders all swear on the Book, and our basic legal structure owes its origins to the words found in these teachings. As we explore just what the true meaning of Christmas is, and no Obama, it’s not that little trees need love, we could do well to learn about what all of this means. What better gift could you give a movie and television fan during Christmas? This is why we celebrate: “For thousands of years Christians have celebrated the birth of their savior on December 25th.”

Gino Sassani is a member of the Southeastern Film Critic's Association (SEFCA). He is a film and television critic based in Tampa, Florida. He's also the Senior Editor here at Upcomingdiscs. Gino started reviewing films in the early 1990's as a segment of his local television show Focus. He's an award-winning recording artist for Omega Records. Gino is currently working on his 8th album Merchants & Mercenaries. Gino took over Upcomingdiscs Dec 1, 2008. He works out of a home theater he calls The Reel World. Favorite films: The Godfather, The Godfather Part II, The Body Snatcher (Val Lewton film with Karloff and Lugosi, not the pod people film), Unforgiven, Gladiator, The Lion King, Jaws, Son Of Frankenstein, The Good, The Bad And The Ugly, and Monsters, Inc.
Tuesday Round Up: December 15, 2015 Star Wars: Episode VII – The Force Awakens