Posted in: Disc Reviews by Gino Sassani on December 16th, 2015 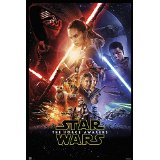 It sure does seem like it was a long time ago since Star Wars was actually very good. It doesn’t matter if you thought Empire or Jedi was the last good film; few people that I’ve encountered mentioned the more recent trilogy in the same sacred breath as those original films. Star Wars gave us swashbuckler adventure in the spirit of the early serials. Then it was about a mythical epic story that swept a generation into its colorful universe. What George Lucas created in the late 1970’s will never die. But before long it became more about the creator and less about engaging the fans. The attitude turned into  “this is my franchise and I’ll do whatever the heck I want to do with it.” First he changed elements of the first films, most notably the “who shot first” controversy over Hans Solo and Greedo. It was as if Lucas was truly feeling like God now. Lucas giveth and Lucas taketh away. The prequel trilogy was all about getting theaters to change to digital and presenting films that shouted wildly, “Look at me”. Many scenes were so crowded with visuals that it wasn’t even possible to take it all in. The technology began to overshadow the story. And it was always made worse that Lucas didn’t seem to care at all what we thought. Star Wars no longer belonged to us.

Enter Walt Disney Studios. Disney was enjoying quite a lot of success buying properties like Pixar and Marvel. They paid huge prices but ended up making it back in what seems like mere hours. Now all that remained was for George Lucas to make one last sacrifice for the fans. Could he walk away from his brainchild? Of course, if $4 billion is making a sacrifice, I wouldn’t mind making one myself. Still, it was the best thing that Lucas could have done. He stepped away and let a new generation guide the next phase in the life of Star Wars. It was a long wait, and it almost seems surreal that it has finally arrived. Arrived it has, with the release of Star Wars Episode VII: The Force Awakens.

The choice of director went to J.J. Abrams. It was a pretty solid one. Abrams has put together a good resume, particularly with reinvented franchises. He worked on Mission Impossible and rebooted Star Trek for the big screen. He has always called himself a Star Wars fan, and he had some pretty sweet ideas from the beginning.  One of the most impressive was to shoot the movie on film. It’s ironic that the franchise that really pushed the digital projection era was returning now to its roots. He also decided to do as much of the film’s visuals with as much practical f/x as possible. Certainly, there some incredible CGI here, but there are a lot of model ships and in-camera tricks that will absolutely return the feel of the franchise back to its early days. The overall visceral experience here is much closer to the first trilogy than it is to the prequels. Because of this, the characters and their surroundings feel solid and real. I can once again imagine that I’m there and let the film experience take me away to that galaxy far far away, and suddenly I’m a 15-year-old kid again. That alone is worth the price of admission.

But it’s not just the “feel” of the old movies that has returned. Some old friends have returned to us as well. Harrison Ford returns as Hans Solo, and his trusty co-pilot Chewbacca is still right there by his side. We always knew they were friends, but now we get to see the depth of that relationship. It’s not just the actors who have matured but the relationships between some of these characters, and the Chewie/Solo relationship is a tearful one, to be sure. Carrie Fisher is back as pretty much the leader of what was once the Rebellion. She doesn’t get a lot to do here, but she serves as the maternal heart of the film in more ways than one. Anthony Daniels is still the voice of C3PO, and many of the iconic alien characters from the original films return in often meaty parts.

Of course, there’s been a ton of speculation about Mark Hamill and his conspicuous absence from the trailers. Rest assured, he is there. His presence is one of those things you really need to discover for yourself. It might not be the big moment you are expecting, but it is certainly an emotional one, and quite subtle in many ways. He’s the mysterious link in the film. There are a lot of people looking for him, and not all as an old friend. To many he has become the mythical figure that many aren’t even sure ever existed. Of course, we know he did, and that he still does. What all of that means is something I leave you to discover on your own.

All of the physical elements are there. You’ll see plenty of shots dedicated to memorable technology. The tie fighters and X-wing ships have been tweaked a little, but they’re pretty much just like we remembered. Abrams was very careful to pay off those requisite shots and traditional elements. Make no mistake. This really is a Star Wars film in every way. It’s the one you’ve been waiting for since Return Of The Jedi.

To say more would truly be to spoil your own experience. You’ll find very few plotlines in this review, and that’s not failure to inform, but rather consider it a chance for you to live those two hours in a way that will honor the wait and the struggles you’ve been through to get to this point. It’s a moment you will absolutely want to savor. Unfortunately, it all moves so fast that I found the two hours had come and gone before I knew it.

Of the plot I will say a few things. There is an obvious effort to revisit some of the most memorable beats from the early films. Yes, there’s a new and improved Death Star, of sorts. Yes, the gang will need to take it out before it is able to do its incredible damage. At first I was a bit unhappy that so many of these beats appeared to be repeated, but by the time it was over I realized just how much they kept me engaged, allowing me to appreciate the many new elements and characters. And there are a ton of those.

One final point on the plot. This film brings up questions by the case. There’s so much I want to know about the new order of things. I was painfully aware that a lot has happened since Jedi, and I wanted very much to know those things. How much of these answers we’ll get remains for future films to tell. Give The Force Awakens credit for taking all of this anticipation and paying it off while maintaining that same level of anticipation for the next films. It’s an appetizer. There’s so much more to see and learn.

The old gang is a joy to behold, but they are older now, and the universe needs new heroes and new villains. Daisy Ridley is the spotlight hero in this film. Her character’s name is Rey, and much like Luke before her she leads a mundane life in a backward planet until events land her in the middle of the action. There’s little question that this is developing into her story, and she’s quite a nice fit for the part. Lucas had made many casting mistakes in his prequel films. That has been corrected here, and the new characters and the actors who play them have the kind of strength that Luke, Han, and Leia had before. Her journey is just beginning, and the film’s conclusion promises an exciting time to come for Rey.

John Boyega is Finn. His character’s story is the most unexpected. His life offers an entirely new perspective on both the Rebellion and the Empire, now called The First Order. It’s such an uplifting experience to see these new characters interacting with so many of the first film’s iconic characters. Abrams blends them together in a seamless bit of story and filmmaking that makes this a natural transition film from Jedi. In fact, it’s almost as if the previous films did not exist. You’ll find no direct connection at all to those films. This one picks up 30 years after Jedi and refuses to look back. That’s our job, and Abrams merely gives us the tools to do it ourselves.

Of course, there’s also a new villain, and the less said about him the better. He’s the guy with the odd-looking light saber, and yes, he reminds us quite a bit of Darth Vader. It’s not an accident. As you can get from the trailer, he is inspired by Vader, keeping his mangled helmet as some kind of talisman. But this is a more calculated version of Vader. He’s pledged not to make the same mistakes and is colder and far more emotionally detached. His story is one of those that will require more to fill in some huge holes. I want to know how he came to be what he is more than I ever did Vader. He’s scarier than Vader was, and I suspect the best is yet to come.

All of those wonderful dogfights and heroics are there. Many are framed in quite familiar set pieces and situations. Abrams has done what Lucas was clearly not capable of doing. He balanced the expectations of one generation of fans who hold this stuff to be sacred against a younger generation that has been jaded by 30 years of escalation in computer-generated worlds. Maybe you can please everyone after all. The result is an even larger audience for this stuff, if that was even possible. That almost hurts my head to imagine, but I’m very sure it’s true. Star Wars is about to be larger than it ever was. You are about to witness a generational event. “The Force, it’s calling to you. Just let it in.”

Gino Sassani is a member of the Southeastern Film Critic's Association (SEFCA). He is a film and television critic based in Tampa, Florida. He's also the Senior Editor here at Upcomingdiscs. Gino started reviewing films in the early 1990's as a segment of his local television show Focus. He's an award-winning recording artist for Omega Records. Gino is currently working on his 8th album Merchants & Mercenaries. Gino took over Upcomingdiscs Dec 1, 2008. He works out of a home theater he calls The Reel World. Favorite films: The Godfather, The Godfather Part II, The Body Snatcher (Val Lewton film with Karloff and Lugosi, not the pod people film), Unforgiven, Gladiator, The Lion King, Jaws, Son Of Frankenstein, The Good, The Bad And The Ugly, and Monsters, Inc.
Holiday Gift Guide Spotlight: History/A&E Tuesday Round Up: December 22, 2015