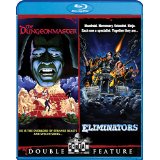 Once again I have the pleasure of reviewing a Blu-ray double feature distributed by Shout Factory. This time out, I have been graced with two sci-fi adventure films from the mid 1980’s: The Dungeonmaster and Eliminators. Although the two films play well as a double feature, the cheesy (yet oh, so beautiful) aesthetics and special effects are not these films’ only connection. Peter Manoogian sits in the director’s chair for Eliminators and also one of the segments of The Dungeonmaster. Manoogian came onto my radar with his 1992 video feature Demonic Toys, so I was really excited to experience his earlier (and arguably better) work.

Starting with The Dungeonmaster: this film is absolutely crazy. If you do not have a clear grasp of the film’s concept, it may be a tough pill of 80’s sci-fi to swallow. The film follows Paul Bradford (Jeffrey Byron) as he journeys into his own computer system to save his girlfriend from the evil wizard Mestema (Richard Moll). While that story seems simple enough, the film is broken into several segments. Each segment is a different challenge set forth by Mestema that Paul must overcome. However, what makes this concept unique is that each segment has a different director. That being said, although each segment is directly tied to the story; with each new challenge, the film changes tone right before your eyes. If you are not aware of that fact going in, I will admit the film might be a little overbearing.

The amount of cheesy sci-fi effects is, with out a doubt, an acquired taste. However, there are two elements of The Dungeonmaster that make the Blu-ray a worthy addition to any cinephile’s collection: Richard Moll’s acting and a surprising musical performance by W.A.S.P. Moll’s portrayal of an evil wizard is incredibly hammy at times, but he also plays scenes as if he were a thespian on stage. This fluctuation makes his entire performance enjoyable, even if he doesn’t have as much screen time as Byron. The performance by W.A.S.P. was so incredibly surprising it was laughable. This segment, directed by Charles Band, is essentially a W.A.S.P music video. The front man acts as outlandish as possible, while attempting to seem threatening to the main character’s damsel in distress. My words alone are not able to accurately describe how silly it is. Whether you are a fan of 1980’s hair metal or not, it is easily the most entertaining of all the “wizard challenge” vignettes.

Next up is Eliminators, which I must say is a hidden gem that I am proud to own. The film tells a story of a cyborg known as Mandroid (Patrick Reynolds), who is discarded and betrayed by his creator, Abbot Reeves (Roy Dotrice). Mandroid escapes to find Nora Hunter (Denise Crosby), Reeves’ old partner. Nora discovers that the technology used to build Mandroid was her own, stolen by Reeves five years prior. Together, she and Mandroid hire a rugged captain Harry Fontana (Andrew Prine), and they travel up river to confront Reeves at his hideout. Along the way, the troupe meets their final piece, Kuji (Conan Lee), a ninja, who literally has no character traits other than hating Reeves. Together, they fight off Reeves’ henchman and attempt to foil his plans to travel back in time to take over ancient Rome. This is, with out a doubt, one of the most insane concepts for a 1980’s screenplay I have ever seen.

Although the plot is extremely convoluted, this film is so enjoyable. Shot on 35mm, the high-definition digital transfer is so impressive. To compare, the digital transfer of The Dungeonmaster did not do any favors for the film’s costumes and special effects. Eliminators had the aesthetics of the 1980’s blockbusters we all know and love. I believe that this can also be attributed to a lot of the creative choices in direction involving cinematography and editing. As crazy as the plotline sounds, the filmmaking was taken very seriously, which is probably why the film is so enjoyable to watch. It was also fun to watch two B-list stars, Denise Crosby (Star Trek: The Next Generation, Pet Semetary) and Andrew Prine (The Town That Dreaded Sundown, Amityville II: The Possession) channel Han and Leia from the beloved Star Wars franchise.

In brief, this double feature is totally worth buying just to own a Blu-ray copy of Eliminators. Both films are extremely fun, but Eliminators is what earned this set a three out of five. Quite honestly, I have never been so pleasantly surprised by a cheesy 1980’s action flick. Normally they are fun, but they are rarely as intriguing or well crafted as Eliminators. Please, don’t just take my word for it: go have yourself an 80’s sci-fi night. You won’t be disappointed!