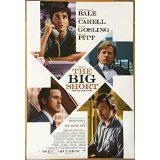 In the end, I have to commend the filmmakers for pulling off an extremely difficult task — making the financial collapse funny, accessible, and fascinating — with aplomb. As a result, The Big Short has a chance to become the definitive film about one of the gloomiest chapters in recent history.