Posted in: The Reel World by Brent Lorentson on January 1st, 2016 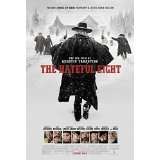 The name Quentin Tarantino carries the weight of legacy of such directors as Alfred Hitchcock, Steven Spielberg, and more recently Christopher Nolan.  I’m not saying one is better than the other, but simply by name recognition alone Tarantino is in the company of directors that when you hear that his name is attached, there will be a loyal fan base flocking to the theaters to see what they have to dazzle us with.  This time around Tarantino returns to the cinema in his biggest release to date; in glorious 70mm we have The Hateful Eight. Tarantino returns to the Western genre, only this time he heads out west to Wyoming to thrust us into his most claustrophobic setting since Reservoir Dogs. Let me just come out of the gate and say, if you’re looking for the over-the-top fun you found in Django Unchained, you’re going to have to readjust those expectations; this time around we are given something much more intimate and all the more rich with dark humor.

John “The Hangman” Ruth (Kurt Russell) is a bounty hunter on his way to turn in his prisoner, Daisy Domergue (Jennifer Jason Leigh) to hang.  It’s along their stagecoach ride that they come across another bounty hunter, Major Warren (Samuel L Jackson) who is looking to collect on a bounty of his own, only his prisoners are already dead. As we’ve seen in previous Tarantino films, he chooses to tell his story in chapter form, and for the first chapter of the film we spend it getting to know this trio of unsavory characters.  If you were hoping chapter two would pick things up in the action department, I’m sorry to say instead it is spent with a new passenger hopping aboard to avoid the oncoming blizzard.  The new passenger is Chris Mannix (Walton Goggins); he’s the new appointed sheriff in the town Ruth plans on taking his prisoner to hang, and with this new addition the dialog only continues to flow.

A good portion of this stagecoach ride revolves around a letter that is in Major Warren’s possession that is supposed to be a personal letter written to him by none other than President Abraham Lincoln.  For Ruth he sees this letter as a way he can trust and bond with Warren; as for Mannix, he doesn’t believe a word of it.  And it’s this doubt and suspicion that only festers along the way.

The front half of this film is just about filled with nothing but a talented batch of actors chewing up some of Tarantino’s best crafted dialog.  Even though we’ve spent a good portion of an hour on a stagecoach, the cast manages to keep us entertained while at the same time never allowing us to ever feel who is “good” or “bad”.  Just about every moment we have where we think perhaps a character may not be so bad, they end up doing something that reminds us of their loathsome roots.

When the stagecoach arrives at Minnie’s Haberdashery, we get to meet the rest of the cast of characters as the blizzard is in full swing.  Inside struggling to stay warm, more unsavory characters, played by Bruce Dern, Michael Madsen, Tim Roth, and Demian Bichir, who seemed to be a doppelganger to Eli Wallach in The Good The Bad And The Ugly.  We get a lot of tough-guy posturing as everyone gets to know each other (in an odd coincidence, just about everyone seems to know or have heard of the others).  And still nothing seems to happen, that is up until we get the chance to see Major Warren and General Smithers (Dern) verbally square off.  Personally, the speech Jackson delivers in this sequence is perhaps one of the best performances we have gotten to see from him, and the execution by Tarantino from his dialog to everything it took to get what we see on the screen is nothing shy of brilliant.  In true Tarantino fashion it takes a direction many will not see coming, and some may even be appalled by it, but what makes it work so well is it allows the viewer to question, is Major Warren’s story even true?

The second half of the film kicks in as though we’ve been introduced to an entirely new film altogether. It’s in the second half of the film where the story finally gets some momentum as it becomes clear that some if not all of the characters may not be who they say they are.  The action may be sparse, but the violence and the gore that hit the screen are over the top, and pardon the term, a real hoot.  For some the violence may be a bit excessive, but that should be something you come to expect from Tarantino.

What’s the most surprising about this film is really the film that it was shot on.  Tarantino brings back his director of photography, Robert Richardson (Kill Bill and Django Unchained) and they shoot the film on 70 mm (basically the film is twice the size of the regular film you are used to seeing).  I love film, and I appreciate them wanting to use this format, but it seems to not get the proper chance to flourish.  Don’t get me wrong, the cinematography is beautiful, and the detail that is captured in the haberdashery is great, but 70 mm is something you expect to see used on a much grander scale.  Lawrence of Arabia and Ben-Hur are just a couple of the classics that have used this format, and though I appreciate the use of the format here, to win over audiences and studio executives that believe film is nothing more than an ancient tool, this wasn’t the film I’d use as an argument to support its resurgence.

As much as I’m a fan of Tarantino’s work and as much as I enjoyed all the performances, I see this as being a film that will divide many fans.  For me, I come away enjoying the heck out of it, but for others I can understand people complaining about this being too over-the-top and just too long.  I don’t believe either filmgoer will be wrong, but I think everyone will still walk away with a very distinct impression of what they saw.  While it may not be my favorite Tarantino film, this is certainly his most mature work.  A little bit Sergio Leone on the front end and the vicious bite of a Sam Peckinpah film in the second half, it still manages to be a helluva ride.

Brent Lorentson is a horror writer and film critic based out of Tampa, Florida. With a BA in Digital Film, he co-wrote and co-directed Scavenger Hunt. His short stories have appeared in various horror anthologies. In 2019 his short script Fertile Blood will be a part of the anthology horror film Slumber Party. He is currently working on his first novel A Dark and Secret Place set to be released in late 2019. Favorite Films: Taxi Driver, Fight Club, I Saw the Devil, The Wild Bunch, Dawn of the Dead, A Clockwork Orange, Pulp Fiction, Heathers, The Monster Squad, and High Fidelity.
Shameless: Season 5 (Blu-ray) 12 Days Of Christmas Giveaways – Day 8: Original Christmas Classics Gift On Blu-ray From Dreamworks