Posted in: Disc Reviews by Gino Sassani on January 2nd, 2016 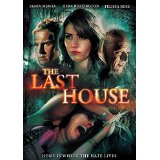 As soon as you see the opening credits to The Last House, you have a pretty idea that you’re not in Kansas anymore, which was quite strange for me, since I’m supposed to be in Florida. Director Sean Cain lets you know up front that the film will challenge your ability to keep up. It doesn’t help that you get an intercut of actor Ezra Buzzington spouting some kind of philosophy that makes no sense, partly because you can’t  understand everything he’s even saying. Sadly, the film doesn’t come with subtitles, so it appears that Cain just doesn’t want you to get comfortable at all. Well… mission accomplished. So, is that a good thing or a bad thing?

As the film proper begins, we get to know a hooker named Love (Walsh). Yeah, typical hooker stage name, except Love is her real name, while her “hooker” name is Barbara. Already I think someone has seen way too many Kevin Smith films. She’s fallen in love with one of her clients. Ned (Mewes) spends money for her time to give her a break from having to do what hookers do best. He finally convinces her to quit the sordid life and be with him full time. Of course, that isn’t going to go over well with Sonny (Forcinito), her pimp. He has already committed her and two others to a private party for the night. So Love’s going out on one last job before going straight. If that doesn’t sound familiar, you’re not watching enough movies.

The client is Hate (Buzzington), who is having a small party. There’s his “friend” Cleb (Gray) and a woman named Mistress Selma (Parent). Here the film sticks in the mud with some of the worst dialog imaginable. The characters are trading some odd philosophy / meaning of life crap. Finally, it’s time to split into couples and get to what the girls came to do. Hate claims Love for himself, not yet knowing her name and the poetic irony of the whole Love and Hate dynamic. It all ends rather badly, and we find Love somehow caught between life and death, seeking revenge for the deaths of her friends. Is she a ghost? Only her hairdresser knows for sure, because I sure as heck couldn’t figure it out. All the while Ned is making trouble for Sonny, trying to find out where Love has gone.

The only redeeming factor the film does sport is a couple of the performers. Buzzington does his absolute best with the material he’s given. To his credit, he takes it all very seriously and delivers a poorly-written character as more interesting than he has any right to be. It’s a terribly nuanced performance wasted on bad material. This is really the first starring role for actress Lauren Walsh, and she’s pretty impressive. She’s one of those actors who knows how to deliver wonderful range of expression with her eyes. I’m a sucker for those kinds of performers, and she shows herself as being talented far above the material here. It’s her performance that keeps you engaged at all. I can’t wait to see her in something better.

As far as production values go, no one here is trying to make this out as anything but a low-budget film. Unfortunately, it’s not the lack of money that works against the film here. It’s the way the movie is filmed. The sound and visuals are rough and likely intentionally come off like a cheap porno. You can’t hear dialog that must be crucial, and the microphones are picking up too much background noise. Even on a skimpy budget, these are production issues that can be solved pretty cheaply and in little time. What is important is for the filmmakers to care enough about the finished product to take the time to do it. That’s the unforgivable sin for low-budget filmmaking. You have to give a crap. You make up for the lack of money by an increase in effort. Cain and his crew couldn’t be bothered, and now neither should you. A couple of nice performances are wasted already; don’t add your 90 minutes to the real death toll here.

The film’s actually not new at all. It was released in 2011 as Breath Of Hate, a title that at least makes more sense. No explanation can be found in the brief extras as to why the name change. Of course, when you’re selling a bad product with a bad reputation, it’s common to change the name and try again. It’s cookie-cutter movie making at its worst. “Insert slot A into slot B for money.”

Gino Sassani is a member of the Southeastern Film Critic's Association (SEFCA). He is a film and television critic based in Tampa, Florida. He's also the Senior Editor here at Upcomingdiscs. Gino started reviewing films in the early 1990's as a segment of his local television show Focus. He's an award-winning recording artist for Omega Records. Gino is currently working on his 8th album Merchants & Mercenaries. Gino took over Upcomingdiscs Dec 1, 2008. He works out of a home theater he calls The Reel World. Favorite films: The Godfather, The Godfather Part II, The Body Snatcher (Val Lewton film with Karloff and Lugosi, not the pod people film), Unforgiven, Gladiator, The Lion King, Jaws, Son Of Frankenstein, The Good, The Bad And The Ugly, and Monsters, Inc.
12 Days Of Christmas Giveaways – Day 9: Duck Dynasty: Season 1-8 Collector’s Set From History 12 Days Of Christmas Giveaways – Day 10: History Bible Collection