Posted in: The Reel World by Gino Sassani on January 2nd, 2016 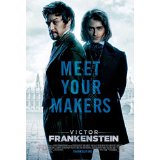 “You know this story…”

At least you think that you do. Mary Shelly’s Frankenstein is one of the best known novels of all time. But thanks in part to Hollywood, it is also one of the most misrepresented stories of all time. I’m a fan of both the novel and the series of Universal and Hammer films going all the way back to 1931 when Boris Karloff played The Monster and Colin Clive played the mad Dr. Frankenstein. Missing from both the original novel and the James Whale Universal film is any mention of a character named Igor. There isn’t even an assistant at all in the book, and in the 1931 film the hunchbacked lab assistant was named Fritz and was played by Dwight Frye. The character of Igor, spelled Ygor then, didn’t arrive until the third film in the Universal series. Ygor was not a hunchback but rather had a serious neck issue from a botched hanging. He was played by Bela Lugosi, long sought for the Monster in the first film, and it’s my favorite Lugosi character of his career. Ygor can be found in both Son Of Frankenstein and Ghost Of Frankenstein. He would actually inhabit the Monster through his brain in Frankenstein Meets The Wolfman. The point is that Lugosi made such an impact in the role that our collective conscience appears to forever link him as the default mad scientist assistant. That’s where the film Victor Frankenstein comes in. Daniel Radcliffe plays Igor to James McAvoy’s title character Victor Frankenstein.

When we first meet Igor, he is living in a circus where he is badly abused and the brunt of ridicule from his fellow circus performers. His desire to leave finds him in a cage where he watches the woman of his dreams work the trapeze. His life changes when his beloved Lorelei (Findlay) falls from her swing and requires medical attention. Fortunately, there was indeed a doctor in the house. It was Dr. Frankenstein, who comes to the girl’s aid only to discover that the deformed Igor has a sophisticated knowledge of anatomy that belies his misshapen body and self-deprecating attire. It’s not just the girl who needs saving. In a rather campy action sequence Frankenstein rescues the then-nameless Igor, not to be his idiot assistant, but rather to be his partner. Together they will unlock the secrets of life.

It turns out that Frankenstein was at the circus for spare animal parts. This Frankenstein is building an animal creature first, which he does with a great deal of success. This triumph doesn’t go unnoticed, and soon Igor finds himself on the outside while a team is brought in to take the next step and animate a human form. Of course, it all goes as badly as these things usually do.

James McAvoy and Daniel Radcliffe are terrific in their roles. There is an instant, albeit uneasy chemistry between these two characters. This is where the movie takes us somewhere the Frankenstein story has never really gone. McAvoy might be over the top at times, but no more than Colin Clive was in 1931. But it’s Radcliffe who really puts in the star performance here. He has finally completely shed his Harry Potter guise by delivering an incredibly nuanced performance. Fans who are disappointed in the film might want to check it out again and pay more attention to what Radcliffe is putting down here. This is a truly memorable character. Igor makes an amazing transformation from freak clown to extraordinary scientist, and he does so not with a magical bit of alchemy going from one to another but by changing layers ever so subtly so that by the time the transformation is complete the two characters are unrecognizable from each other both in appearance and mannerisms. He does this all the while allowing us to see just the seed of the man he becomes in his initial incarnation. It’s just enough so that we aren’t completely taken aback by the change. I would liken it very much to a caterpillar transforming into a moth.

The story attempts to stay true to the Shelley material at least as much as any film production has. What Shelley wrote in her almost accidental novel is impossible to film. The trappings we’ve come to recognize derive more from the 1931 film and its sequels than from anything remotely found in the important novel. There are also obvious references to both the Universal and Hammer films from the obligatory “It’s alive” to the almost David Prowse/Karloff mash-up of the creature design. There’s even a rather clever reverse reference to the Mel Brooks classic Young Frankenstein. I was quite thrilled to see McAvoy deliver a modern version of the once-censored line from Whale’s production where Frankenstein ponders knowing how it feels to be God. Victor has a brother named Henry, which is the name used in the Whale productions. There’s also a nice homage to a George Atwill inspector who lost an arm to the Karloff monster. But the film shouldn’t be judged by its adherence to anything that came before. Yes, we love the wonderful Tesla coils of the lab and the shrieking life-giving crackle of the lightning, and it’s all here for us to revel in with the creator. The production design will not let you down here in any of those expectations. Yet you have to be willing to take the journey from that slightly tilted perspective of the Igor character. Radcliffe’s narrations are spot-on to immerse us in his own world of gods and monsters.

The greatest flaw here lies in the Monster himself. The film’s unique perspective leaves little room for development of any kind for this creation. He’s almost a throwaway after tremendous buildup and a huge disappointment in the end. There is almost no time here to do any of that, and it’s a mistake of the highest order no matter whose point of view the story is told from. There are also the expectations of an audience to consider, and when they hear the name Frankenstein they want monsters so much so that another terribly misrepresented aspect of the familiar tale is the juxtaposition of the title from creator to creature. Frankenstein, of course, refers to the man, not the monster. Those looking for more monster mayhem will be somewhat disappointed.

And there lies the problem. This isn’t really a horror film. It’s an interpretation that reminded me more of Guy Ritchie’s take on Sherlock Holmes than anything else. The action has been ramped up considerably, but little of it has to do with stalking creatures and hapless victims. There’s less of the horror trappings than I’m afraid most Frankenstein fans will expect. The film appears to be taking a beating for defying those expectations. I look at it as if this is the character study of these characters that we never really had before. I revel in its unique approach while delivering enough of the familiar to keep me smiling. It’s a ride that I rather enjoyed in the end. I prefer to think of it as a little “life out of death”.

Gino Sassani is a member of the Southeastern Film Critic's Association (SEFCA). He is a film and television critic based in Tampa, Florida. He's also the Senior Editor here at Upcomingdiscs. Gino started reviewing films in the early 1990's as a segment of his local television show Focus. He's an award-winning recording artist for Omega Records. Gino is currently working on his 8th album Merchants & Mercenaries. Gino took over Upcomingdiscs Dec 1, 2008. He works out of a home theater he calls The Reel World. Favorite films: The Godfather, The Godfather Part II, The Body Snatcher (Val Lewton film with Karloff and Lugosi, not the pod people film), Unforgiven, Gladiator, The Lion King, Jaws, Son Of Frankenstein, The Good, The Bad And The Ugly, and Monsters, Inc.
12 Days Of Christmas Giveaways – Day 8: Original Christmas Classics Gift On Blu-ray From Dreamworks Sinatra: All Or Nothing At All (Blu-ray)