Sinatra: All Or Nothing At All (Blu-ray)

Posted in: Disc Reviews by Gino Sassani on January 2nd, 2016 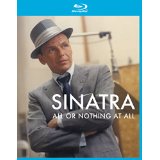 “His imperfections were unsettling. But Frank Sinatra was a genuine artist, and his work will endure as long as men and women can hear and ponder and feel. In the end, that’s all that really matters.”

He was The Beatles before The Beatles were The Beatles. His voice would make women swoon and men want to be him. He romanced some of the most beautiful women in Hollywood history, and he sat at tables with kings, princesses and presidents. He was The Voice. The Chairman Of The Board. He was Old Blue Eyes. His name was Francis Albert Sinatra, but we all called him Frank.

In the spring of 1971, Frank Sinatra surprised the world by announcing that he was retiring at the age of 55. He would deliver a final performance to invited guests at the Ahmanson Theatre in L.A. The concert would raise money for charity and featured such audience members as the sitting Vice-President Spiro Agnew. Grace Kelly (then the Princess of Monaco) acted as hostess for the event. In attendance were Cary Grant, Jimmy Stewart, Lucille Ball, Bob Hope, Jack Benny, and all of his Rat Pack friends. Security was handled by the United States Secret Service, but there was a grand theft that night. It was committed in front of everyone present. Frank Sinatra stole a lot of hearts as he performed a series of songs intended to take the crowd through the milestones of his career. It would be the last time any of us would hear Frank Sinatra sing in concert again. Except, of course, it wasn’t. The retirement lasted less than two years. The memories lasted a lifetime.

That’s exactly where the documentary Sinatra: All Or Nothing At All takes its inspiration. The concert’s 11 songs serve as themes for each section or chapter of the documentary. It begins with Sinatra’s early childhood and takes us through the singer’s milestones leading toward the 1971 retirement concert itself. Unfortunately, while we get to see plenty of clips from that show, we never get an uninterrupted song. They serve as signposts that take us to the documentary footage itself.

The actual documentary is a bit stylized as well. We hear from plenty of the people in Frank Sinatra’s life, from his first wives and his children. For the most part they are voices only. We’re never taken away from footage that accents the narrative. These can be anything from archive footage of times and places that detail a particular moment in his life to extremely rare footage and stills of the man in those early years of his career. Newspaper headlines mark landmark events, and vintage interviews give us Frank’s take over time. We never see the faces of the interviewed participants in the typical breakaway style. Some of the voices are provided by actors from published accounts of the participants. There might be a lot of people talking, from friends to historians, but the focus is never on the speaker. The laser-sharp focus is always on the life of Sinatra himself.

The film doesn’t sugar-coat the controversial moments. We get a good look at Frank’s temper and all the nasty details of his womanizing and treatment of his wives. You get the impression that the filmmakers are doing their best to be honest about the man’s failings as well as his artistic greatness. We get an intimate look at those moments when Sinatra’s career began to fail and the events that led to each resurgence, Frank’s involvement with mobster Joe Giancana, and his association with the Kennedy family. This isn’t the fairy tale the Kennedys likely told at public gatherings. This one bites down hard on the possible election frauds and Frank’s tenuous relationship between Giancana and the Kennedy family. We see the hurt that drove Frank into the arms of Kennedy’s enemies like Nixon and Reagan. No topic appears to be off limits, and the documentary shines because of it. The filmmakers do not turn any of the attention on themselves. They are invisible, just as they should be. It’s directed flawlessly by Alex Gibney, who developed an extraordinary concept that lets Frank and the retirement concert songs lead the story.

The documentary is split into two parts, each on its own Blu-ray disc. The first takes us from childhood until his resurgence at Capitol Records. This is the time of From Here To Eternity, which earned Sinatra an Oscar, and the legendary story touched upon in an iconic moment of The Godfather.

The second part takes us from there until his retirement concert in 1971. Of course, there is a ton of the man’s life and career after that date. The documentary makes its only real mistake when it tries to capsulate those nearly 30 years in a 15-minute coda. There was room for a sequel that was a missed opportunity. I could see the idea being picked up, but using the 80th birthday concert in the same way to cover the second half of Sinatra’s career. It’s a mistake that can easily be forgiven by the level of detail and care taken in the part of his life covered thoroughly. No matter how much you think you know about the man, I promise you there is something to be learned here. There isn’t a more extensive piece out there on Frank Sinatra, and it’s a must have, to be sure.

Each part is presented in its original aspect ratio of 1.78:1. The 1080p image is arrived at with an AVC MPEG-4 codec at an average 35 mbps. Let’s be honest here. The high-definition image presentation isn’t so important here. So much of this footage is too old to be anything but rough. Credit these guys for going after the truly rare stuff and not worrying so much about what condition the footage happened to be in. Much of it is scratchy black and white, but the material is so fascinating that I found myself not even thinking about the condition of the material.

The DTS-HD Master Audio 5.1 is also there strictly to service the narration. The musical numbers are too much of an archival element to benefit much from an uncompressed audio presentation. If you want high fidelity Frank Sinatra, buy a concert or listen to a CD. There’s too much to learn here to worry about the quality of the sound.

The danger here is that the hero tarnish will show more often than fans would like for it to appear. To his friends Sinatra was the champion of civil rights and a generous man. To his enemies he was brutal to the point of violence. In love he was a passionate companion, but spurned he was a dangerous minefield, both unpredictable and cruel. Was he connected to the mob? Frank always denied it, but it’s hard to draw any other conclusion. Who knows what deals he made to promote his career. When desperate, Frank would do anything to stay on top. I think he must have made a deal with Satan himself. Frank did everything a singer shouldn’t do. He smoked to excess and drank even more. Yet he maintained that silky voice and control into his 80’s. Whatever he did, he certainly did do it his way. This is the most his life has ever been laid bare for the world to see. I’m still a fan. I still wish I could have seen him just once in person and hear The Voice for myself. “Why begin, then to cry for somethin’ that might have been?”

Gino Sassani is a member of the Southeastern Film Critic's Association (SEFCA). He is a film and television critic based in Tampa, Florida. He's also the Senior Editor here at Upcomingdiscs. Gino started reviewing films in the early 1990's as a segment of his local television show Focus. He's an award-winning recording artist for Omega Records. Gino is currently working on his 8th album Merchants & Mercenaries. Gino took over Upcomingdiscs Dec 1, 2008. He works out of a home theater he calls The Reel World. Favorite films: The Godfather, The Godfather Part II, The Body Snatcher (Val Lewton film with Karloff and Lugosi, not the pod people film), Unforgiven, Gladiator, The Lion King, Jaws, Son Of Frankenstein, The Good, The Bad And The Ugly, and Monsters, Inc.
Victor Frankenstein Hitman: Agent 47 (Blu-ray)