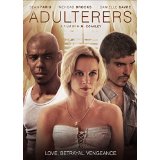 It is not very often that I am able to say that a film revolving around an extramarital affair keeps me engaged. While the writing in Adulterers became rather unfavorable towards the end, the strength of the conflict and the pacing of the editing and cinematography combine to make a significant force. That being said, I was pleasantly surprised by the intensity of the drama that unfolds among the disturbed trio, but there were many moments that distracted me from that pleasure. Through this review, I aim to be as fair and as spoiler-free as possible. I believe this film is definitely worth the watch, regardless of what does not “work” for me.

Adulterers tells the story of Samuel Deuprey (Sean Ferris), a hardworking man, who comes home to find his wife (Danielle Savre) in bed with her lover (Mehcad Brooks). The events and scenes that follow are rooted in humiliation, depravity, and violence, as Samuel decides to resolve the situation in his own way. The way in which Adulterers heightens the tension is through adding details such as: the events transpire on the couple’s anniversary, Samuel works long hours to provide for his wife, money may or may not be involved, etc. While each of the details introduced into the film’s story may be cliché for dramatic films about affairs, they are absolutely necessary in order to understand Samuel’s rage and mania.

First of all, let’s visit the players. Sean Ferris (Never Back Down, Pretty Little Liars) gives an excellent performance and is ultimately what makes the film so engaging to me. His portrayal of a broken man filled with rage is entertaining and believable. Mehcad Brooks (Supergirl) also plays his role of a cornered mouse very well, harmonizing his desperation to live with Ferris’s maniacal advances. The anomaly of the troupe is Danielle Savre (Heroes). While she delivers her lines well, her facial expression is more often than not some form of a smile. Perhaps I read these expressions wrong and they were closer to wincing or crying, but some of the time she did change to a sympathetic, playful mood in an attempt to get Samuel on her side. Ultimately, this made her character rather confusing and a little harder to appreciate.

Sean Ferris may have kept me engaged through the film, but for me, the real star will always be cinematography. Ben Kufrin stands behind the camera for this film, and let me tell you: I have never seen such a well-shot extramarital affair drama. As I said before, the way the cinematography is paired with the pacing of the edits makes this film very easy to watch, but it is the cinematography alone that makes the film so enjoyable. While most of the time the camera is just well placed, there are pockets of really impressive camera movement throughout the film. Most notably, a new (for me at least) take on the dolly zoom. When Samuel discovers his wife, the camera begins a dolly zoom, but it is intentionally choppy, making it more disorienting. Here, I believe the camera movement is most linked to Samuel, as it briefly allows us to visually experience his brokenness.

Overall, the intensity of the drama is what will keep the majority of viewers engaged. Samuel’s psychological gameplay and humiliation techniques are quite unexpected. While I will not spoil the story, I will leave you by clueing you into the film’s format: There are two dream sequences in the film that make the plot and some of the events that take place rather confusing. You won’t “get lost” in the story; you just won’t understand why characters are making certain choices. This is the reason behind my two-and-a-half star rating. While I enjoyed the film, it quickly made a hard left in the last twenty to thirty minutes, ultimately taking me out of the story. However, I do encourage everyone to watch the film for the acting, cinematography, and the intense drama; who knows, you may actually appreciate the dream sequences more than I did.