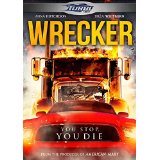 “This road is like a magnet for serial killers.”

There’s a difference between paying tribute and ripping somebody off. Wrecker — a high-speed, low-budget actioner — bills itself as “an homage to road classics like Duel.” Unfortunately, that’s far from the only nod to Steven Spielberg’s 1971 thriller. Wrecker rehashes every significant story beat from Duel, except with a lot less filmmaking skill and a pair of infinitely more annoying protagonists.

The gender-swap in Wrecker is the probably the only biggest departure from the original. Instead of a middle-aged salesman played by Dennis Weaver, our “heroes” this time around are Emily (Anna Hutchison) and Lesley (Drea Whitburn), a pair of bickering best friends on a road trip through a two-lane California desert road. When the pair comes to a fork in the road, they opt to take a shortcut through a stretch called “Devil’s Pass”, which very inconveniently offers zero cell phone or GPS service.

Emily and Lesley soon encounter a monstrous, rickety truck with an unseen driver and an apparent vendetta towards them. After multiple attempts to get away from the mysterious trucker, Lesley overtly antagonizes him. The result is one of the girls going missing, while the other is left to fight for survival against a deadly, possibly supernatural adversary.

The makers of Wrecker also name check Maximum Overdrive, Steven King’s sci-fi effort about machinery (including trucks) that comes to life and tries to destroy humanity. That film had a looseness and campy tone that is completely absent from the just-as-ridiculous Wrecker, which also contains shades of road thrillers like Joy Ride, The Vanishing, and Breakdown. But, as I mentioned before, the movie — with its bright red Ford Mustang that bears more than a passing resemblance to the Plymouth Valiant in Spielberg’s film — really goes through Duel‘s paces.

There’s certainly an effective way to pay homage to the older film, and Wrecker actually gets off to a halfway promising start with a cold open involving a stranded couple broken down by the side of the road. (This car eventually re-appears in the film.) The problem is that instead of simply using the “supernatural/psychotic truck driver” as a template, the film goes on to out-and-out copy multiple sequences from Duel. So we get the same bit where the trucker motions Emily and Lesley to pass him (at their peril), the same case of mistaken identity at a diner, the same gas station stop that results in a phone booth getting destroyed, and the same climactic cliffhanger.

It doesn’t help matters that Emily and Lesley make for a pair of shrill, dumb, irresponsible protagonists who aren’t exactly worth rooting for. At the start of the film, the more aggressive and grating Lesley is trying to convince insecure Emily to get over her cheating boyfriend and develop a backbone. I actually don’t mind that we don’t get much character development beyond that; it’s not like we knew a ton about Weaver’s beleaguered, terrified salesman in Duel. The problem is the lack of grace with which writer/director Micheal Bafaro weaves Emily’s need to “toughen up” into the plot; it’s about as subtle as a mack truck.

The much bigger problem is the shoddy, jumbled staging of the action/driving sequences, which saps them of any tension they might’ve had. And when Bafaro isn’t relying on set pieces from Duel, he is falling back on repetitive, uninspired sequences of Emily and Lesley’s Mustang playing cat-and-mouse games with the truck. (It feels like the fully-functional Mustang should easily leave the truck in the dust; in other words, Wrecker is *not* an effective commercial for Ford.) The minor saving grace here is the performance of Hutchison (Cabin in the Woods), who makes for a scrappy heroine in the face of monumentally dopey circumstances and some contrived filmmaking. Whitburn is properly abrasive as Lesley, but the addition of this second character didn’t offer much beyond annoyance for the audience…and maybe a bit of sympathy for the psychotic driver. (Probably not what the director was going for.)

If Bafaro wanted to remake Duel, he should’ve just called this film Duel in the first place. (Or at least properly credited Steven Spielberg or Richard Matheson, who wrote Duel and the short story it was based on, somewhere along the way.) Instead, we get a thoroughly inept copy that doesn’t even adequately acknowledge its inspiration. I mean, even when Gus Van Sant made his ill-advised, shot-for-shot color remake of Psycho, he didn’t call it Crazy Guy and pretend like it was its own thing.