Posted in: No Huddle by Brent Lorentson on January 6th, 2016 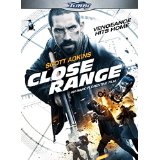 Scott Adkins is one of those actors that I’m surprised hasn’t quite hit the mainstream success he deserves.  In the late 80’s and 90’s this is a guy who would have been an action superstar who would have crushed such icons as Jean-Claude Van Damme and Dolph Lundgren.  It seems that somehow Adkins has been lost amongst the glut of superhero films; he’s one of the true great tough guys who even does most of his own stunts, which is surprising, since some actors these days can’t function on set without their own personal chef and have stand-ins when their face is not on screen.  Close Range is the new release for Adkins that once again shows off his martial arts skills while leaving a high body count in his wake.

Close Range kicks things off in high-action fashion as Colton Macready (Adkins) goes on a one-man rescue mission to save his niece from the clutches of some Mexican drug dealers.  In the process of rescuing Hailey (Madison Lawlor), Colton accidently pockets a flash drive that contains some highly sensitive information for the drug cartel.  The theft of this drive causes the head drug lord Fernando Garcia (Tony Perez) to send out all his top men to retrieve the drive by any means necessary.

Colton manages to return Hailey home to her mom, Angela, (Caitlin Keats) whose new husband has been dealing with the drug dealers who took her daughter.  At the Macready residence the home is swarmed by members of the drug cartel, and it’s up to Colton to protect his family at any cost; by any cost I mean shooting lots of bad guys and breaking their bones along the way. To complicate matters, Garcia calls in the help of the town’s corrupt Sheriff Calloway (Nick Chinlund) to help retrieve the drive.

With all these armed villains swarming the home, the plot seems to go out the door, and instead what we get here is fight scene after fight scene with shootouts thrown in to mix things up a bit.  There is nothing wrong with this; I love a good siege film like Assault on Precinct 13 or Rio Bravo, but the difference here is we don’t ever get to feel like Colton or any of his family is in any real peril.  There is the attempt made to have us sympathize with the Sheriff considering his family is being threatened, but still the threat never feels real.

What we do get are some fun action sequences and a few cool stunts performed by Adkins. I really dug one that has him running up onto the hood of a truck as it is barreling towards him.  If you’re looking for substance or anything more than a late night fight fest to enjoy over a few beers, I’m sorry; this is just a simple shoot’em up, but there is nothing wrong with that.  Adkins continues to show he’s got the brawn and charisma of an action star; he just still needs that one breakout film to show the world what he’s all about.

Brent Lorentson is a horror writer and film critic based out of Tampa, Florida. With a BA in Digital Film, he co-wrote and co-directed Scavenger Hunt. His short stories have appeared in various horror anthologies. In 2019 his short script Fertile Blood will be a part of the anthology horror film Slumber Party. He is currently working on his first novel A Dark and Secret Place set to be released in late 2019. Favorite Films: Taxi Driver, Fight Club, I Saw the Devil, The Wild Bunch, Dawn of the Dead, A Clockwork Orange, Pulp Fiction, Heathers, The Monster Squad, and High Fidelity.
Tuesday Round Up: January 5, 2016 Mercury Plains