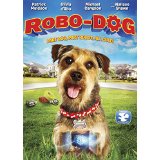 Baby here. I’m the German Shepherd/Chow who handles security here at Upcomingdiscs. You know what puts the scowl in my growl? I’ll bet you guys all had a lot of fun over the Christmas holidays. There were probably a lot of parties to go to. We had one here at Upcomingdiscs, but don’t ask me how it was. That’s because they locked me upstairs in a bedroom the whole time. That’s right, the chief of security was locked up. Apparently I can’t be trusted when people are walking around with a lot of food. They trust me to guard thousands of dollars worth of home video equipment. I keep those Fed Ex/UPS guys in check every day. But  a meatball or a potato chip? I don’t quite make the grade. At least they seem to trust me enough to continue to review the dog films that make it past those delivery guys. If I can lay enough guilt on these guys, I might even get to go see Star Wars. OK, I made that last part up, but a dog can dream, can’t she?

The first thing you need to know is that this movie has nothing to do with next year’s animated film Robo-Dog with Ron Perlman. The name is just the same. You humans call a lot of stuff the same thing, don’t you? That movie will come out soon, and I hope I get to see it. This film is a direct-to-video title that doesn’t quite make the grade.

Tyler’s (Campion) best friend is his dog who is named… well… Dog. Right away I can see this is going to be one of those original movies. And that spells N O T. The whole family depends on Dog, pretty much the way everyone around here depends on me. He gets them up in the morning before the alarm goes off. Now that wouldn’t work here. Gino says really bad words if I make any noise early in the morning. Dog is the backbone of the family until an accident gets him killed. Yeah, no one told me this was going to be a doggie horror movie, and that spells C U J O. Meanwhile Dad (Muldoon) is an inventor working for a company called Epic. He’s been working on a battery that never needs to be charged and a small robot. So when Dog bites the dust … you probably see where it’s all going.

Dad gets fired because his demonstration didn’t go to well. My demonstrations usually don’t go to well either, so I can relate. He ends up working at home and replaces Dog with a new robot version that looks just like him. Only this dog can talk and has creepy arms that come out of his body and stuff. At first Tyler doesn’t want anything to do with a fake dog, but they eventually become buddies. The problem is that mean old Mr. Willis (Shawn) wants that battery now that it works. It kind of reminds me of Frosty the Snowman. The guy throws the thing out until he finds out it can bring something to life. Now he wants it back.

Of course, all of the characters are pretty much like they were out of a cartoon. The Mom is played by Olivia d’Abo, who was the sister on The Wonder Years. Every one of the actors smiles too much. When they enter a room, it’s like they’re posing at a portrait studio to have their pictures taken. Gino calls it over the top. I just call it silly. Mr. Willis is followed around by a guy named Jerome (Robinette), who repeats what he says and has this crazy laugh. I guess he’s supposed to be funny, but really he just creeps me out a lot. Then there’s Barry (Beaumont) who has an accent that sounds like a spoof of Cheers‘ Cliff character. He starts out as pretty much an idiot who ends up being a good guy. Meanwhile the dog is voiced by James Arnold Thomas and just sounds creepy. It’s the kind of voice that could give a pup nightmares, if this pup had nightmares. The only thing I’m afraid of is running out of treats.

The movie is completely silly from beginning to end. If this pup knew what was coming, it’ll be a breeze for you guys. In the end I don’t think kids will end up liking it, because the dog isn’t really very lively or cuddly like me. The adults will just find it stupid, and I don’t think anybody’s going to have a good time. Better if you just go out and play ball with your own dog. Yeah, I know, I just saved you a couple of bucks and about 90 minutes of your time. No need to thank me. “They say that a dog is man’s best friend.”

Baby was a German Shepherd/Chow mix canine reviewer at Upcomingdiscs from 2010 until 2016. She was also chief of security here with her Baby On Board Security side-business. And that spells F A N G S.
The Nanny: Season 5 Flesh and Bone (Blu-ray)