Posted in: No Huddle by Archive Authors on January 7th, 2016 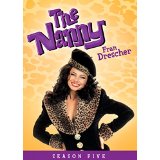 I previously reviewed season 4 of The Nanny, and now it’s time to review season 5. If you are interested in the overview on everything about The Nanny and season 4 in particular, then you will have to go back and look for that review. This all about season 5, which I might suggest is the climax of the 6-season series, for whatever that’s worth. The relationship between Fran Fine and Maxwell Sheffield had been on a slow burn for four seasons, but the time was coming for a reckoning. Will Fran’s persistence and patience pay off?  I don’t want to make this too dramatic, since The Nanny is probably one of the silliest sitcoms ever made, and that’s taking into consideration that there are hundreds and hundreds of silly sitcoms. But The Nanny also had a heart, hidden, frequently, under a garish exterior. When I say garish exterior, I am describing some of the most startling and colorful outfits ever worn this side of a circus. These outfits were frequently explosions of color. Fran Fine, or actress Fran Drescher, was always very attractive, despite crazy hairdos and a signature foghorn voice. The show was supposed to be about a clash of cultures, with Mr. Sheffield depicting the height of sophistication and Fran representing the brash lower class.

The whole thrust of the entire series was that Fran saw the opportunity to marry up into the upper class. As a nanny, Fran was a surrogate mother figure for Mr. Sheffield’s three children. At one point in season 5, we see the late Mrs. Sheffield (Bess Armstrong) come back to talk to Maxwell about his desire to marry again. She gives her approval, because she wants his happiness. When I say there was a heart to the show, Fran was always a well-intentioned person ultimately, and a positive influence on the children. When the time came to be honest and truthful, she ultimately always was. Like Lucille Ball before her, Fran could be ditzy and somewhat deceptive, but she always showed a good nature and positive character. I say that this season was climactic, and that should already be known to fans of the show. The whole point of this staggered DVD release is for those fans who are nostalgic for the show and want to add it to their collection.

The Nanny was a very popular show back in the day, and if you were a fan it is finally available for you to own. If you have never seen the show (which is highly unlikely with syndication over the years), then it might be best to leave it that way. The show might be too much to take for the uninitiated.