Posted in: No Huddle by Brent Lorentson on January 18th, 2016 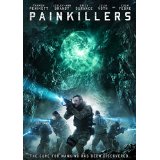 Have you ever had a dream that you wake up from and as your head spins from the snippets of the dream you can remember it takes you a few moments to clear your head and remember where you are?  Usually this is a result from a hard night of drinking, but for Major John Cafferty (Tahmoh Penikett) it is a battle he is waking up from, and it is not a dream.  With no memory of what happened, Major Cafferty wakes up in a special military hospital with several members from his platoon, only some of his soldiers are dead, and no one has a clue as to how they found themselves in the medical facility.

What the solders do know is that they were on a mission to Afghanistan to retrieve a secret object.  To help the soldiers regain their memory, Dr Troutman (Colm Feore) administers a drug that should help stimulate their memories, but instead it causes bouts of hallucinations and even moments of intense rage.  It’s all a nice setup for what could be a fun thriller, but the result is a bit of a forgettable mess (and no pills can reverse these effects).

I dig a good conspiracy yarn. The Manchurian Candidate is one of my all-time favorites, and is a good example of how to use paranoia to manipulate your characters.  Very little time is focused on the characters to really bring the viewer in to care one way or another.  Filling the screen time with the numerous members of the Marines all struggling with the same problem just felt like the film was filling time rather than delivering on clever or unique twists.  All the interesting bits centered on Dr. Troutman and his manipulation of the drug and soldiers. If there were only more moments with Dr. Troutman working with/ or manipulating the soldiers, there could have been some good suspense brought to the table here.

A story point that bothered me more involves how little Cafferty seems affected by discovering someone who may or may not be his wife and is the one to nudge him to see that things are not what they seem.  Considering this revelation has no impact on him bothers me especially since his suspicion towards those treating him should be intensified, but instead he seems to take the news in stride. If this were the only lapse in logic in the film it could be overlooked, but there are many moments from start to finish where the decision making of the characters just doesn’t work or make any sense.

Director Peter Winther has worked on some big-budget sci-fi hits such as Independence Day and Stargate, and you would hope some of that experience would translate here, but sadly the film just comes up short.  What’s frustrating is that on paper this film should work, it’s a solid idea along with a good cast and decent sets, but the end result simply leaves the viewer hanging and expecting more.

Brent Lorentson is a horror writer and film critic based out of Tampa, Florida. With a BA in Digital Film, he co-wrote and co-directed Scavenger Hunt. His short stories have appeared in various horror anthologies. In 2019 his short script Fertile Blood will be a part of the anthology horror film Slumber Party. He is currently working on his first novel A Dark and Secret Place set to be released in late 2019. Favorite Films: Taxi Driver, Fight Club, I Saw the Devil, The Wild Bunch, Dawn of the Dead, A Clockwork Orange, Pulp Fiction, Heathers, The Monster Squad, and High Fidelity.
Rosencrantz & Guildenstern Are Dead (Blu-ray) Everest (Blu-ray 3D)