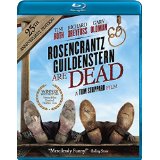 “In our experience, almost everything ends in death.”

Given its morbid-sounding title, I suppose you can also say that in the case of Rosencrantz & Guildenstern Are Dead, things *start* in death as well. The inevitability of death — a notion that is simultaneously profound and crushingly simple — is one of several big picture ideas explored by the small potatoes title characters. Rosencrantz & Guildenstern Are Dead, now making its Blu-ray debut, is equal parts brilliant and befuddling. But as thought-provoking and exhilarating (and funny!) as the exchanges are, I’m not entirely sure this material was meant to be presented as a movie.

“Are you familiar with this play?”

Chances are you’ve heard of “Hamlet”, the tragedy written by an up-and-coming playwright named William Shakespeare. While the deposed Danish prince gets most of the headlines, the play also features a pair of relatively minor characters named Rosencrantz and Guildenstern. The duo takes center stage in Rosencrantz & Guildenstern Are Dead; the title is a nod to the final scene in “Hamlet.”

“Who’d have thought we were so important?”

Rosencrantz (Gary Oldman) and Guildenstern (Tim Roth) seemingly wander from one setting to the next (a forest, then a castle, and a pirate ship) with little-to-no control over where they’re going…or why they’re doing it. They repeatedly encounter The Player (Richard Dreyfuss), who leads a ragtag group of traveling actors. The Player also challenges Rosencrantz and Guildenstern’s preconceived notions about reality. (Do they have any control over their destinies, or are they just following a script? Can you really live your life without any kind of audience.) While these heady questions make up the bulk of the story, the plot of “Hamlet” occasionally butts in, with Iain Glen (Game of Thrones) playing a morose, perceptive version of the famous prince.

Tom Stoppard is the man responsible for all this articulate chaos. He wrote the original play in the mid-1960s, and he is the writer/director of the film adaptation. (Which makes sense, considering that it’d be tough for someone else to interpret this material properly.) Make no mistake about it: the language here is exquisite. On top of that, Stoppard and his performers (more on them later) bring tremendous wit and whimsy to questions like, “What’s the first thing you remember?”, “Are you happy?”, and “Why fear death?” since none of us knows how it feels. The story examines the randomness of life — is it really random or are there greater, unseen forces at play? — and reduces it to a game on more than one occasion.

If you’re thinking that none of this sounds very cinematic…well, you’re absolutely right. I’m not even sure Stoppard’s lack of experience in the director’s chair is the culprit. Even if Stoppard had given way to a more experienced visual storyteller, I still feel like many of the story’s motifs and devices might’ve fallen flat. For example, the random changes in scenery are more disorienting than effective here; on stage, we’re used to seeing the same physical space morph into an entirely new place. And the dialogue, while stunningly and relentlessly superb, can wear you down after a while, especially when there’s no space for a live audience to interject laughter or other reactions.

Thankfully, this potentially-dense movie remains consistently watchable thanks to its two gifted leads. Oldman and Roth were in the early part of their respective movie careers here, but it’s no surprise they each went on to consistently deliver strong work over the ensuing 25 years. No one in the film (including the title characters) can remember which one is Rosencrantz and which one is Guildenstern, but each actor stands out for sure. Oldman gets most of the laughs as the more jovial, simple-minded Rosencrantz(?), while Roth makes for a great straight-man as the more serious-minded Guildenstern(?) The highlight is a verbal volley of Questions fired at one another. Dreyfuss, meanwhile, is appropriately a ham sandwich as the flamboyant Player, but he also has the proper presence when the character flashes his dark side.

Considering its title, Rosencrantz & Guildenstern Are Dead defies audience expectations up until the very end. However, the story’s frequent flashes of brilliance are hampered by the awkward (and unnecessary?) transition from stage to screen.

Rosencrantz and Guildenstern Are Dead is presented in an aspect ratio of 1.85:1. The 1080p image is arrived at with an AVC MPEG-4 codec at an average of 24 mbps. This 25th Anniversary Edition shows its age in a pleasing way, maintaining the prominent grain from the time it was filmed. The colors here are muted by nature — much of the action takes place within castle walls, in a ship’s bowels, or in an overcast forest — but this new HD upgrade still gives the impression that the lights have been turned on compared to its DVD predecessor. Clarity and contrast here are impressive. The only blemish I detected were some very minor instances of artifacting. Otherwise, this is a worthy Blu-ray debut for the film, which has never looked better.

The DTS-HD Master Audio 2.0 track is, to absolutely no one’s surprise, extremely dialogue-driven. So the mono nature of the track means we’re not really missing out on a ton of rear speaker or sub activity that wouldn’t be there to begin with. Nevertheless, the track shows no signs of the film’s age and offers solid depth for Stanley Myers’ score. The all-important dialogue also comes through clearly, which is especially important for the rapid-fire, overlapping exchanges.

25th Anniversary Interview with Tom Stoppard: (55:37) This interview with Stoppard was conducted in September 2015 by Michael Brandman, a producer on the film. It’s a terrific chat that covers the play’s genesis (as a sketch called “Rosencrantz and Guildenstern Meet King Lear”) and Stoppard’s experience directing his first (and only) movie, which he called “enjoyable” but not “easy.” Naturally, Stoppard covers the process of adapting a play to film (leaving about 1/3 out), but also discusses other parts of his career, including his contributions to Indiana Jones and the Last Crusade. Presented in HD.

Interviews: These wonderfully in-depth chats have been ported over from the movie’s earlier DVD release and seem to have been conducted in the early-to-mid-2000s. Stoppard (59:09) once again covers the play’s origins and the process of making the film, so this portion is inevitably a bit redundant. Gary Oldman (58:27) praises the “non-threatening genius” of Stoppard and expresses sympathy for the title characters. Tim Roth (32:56) begins by telling a story his wife suggested he not tell and compares indie vs. studio projects. Richard Dreyfuss (45:30) freely fesses up to the fact that he doesn’t really understand the play overall; rather, he understood the moments he was playing. Presented in standard definition.

As I said before, this isn’t exactly the most cinematic material. But since you’re not likely to catch a production of this play at your neighborhood theater, you’d do well to pick up Rosencrantz & Guildenstern Are Dead and try this heady story out for yourself.

This is especially true now that RLJ Entertainment has granted the film a very solid Blu-ray release with a new, worthwhile Stoppard interview thrown in for good measure. Give it a look if you’re in an existential mood; upgrade if you already own the DVD.