Posted in: No Huddle by Archive Authors on January 20th, 2016 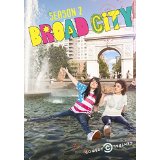 Broad City is about two 20-something ladies who don’t give a whoop whoop. They care so little that they don’t know they don’t care. On top of that, there is a motley collection of odd oddballs. That’s a problem, because these people have nothing but problems. Not that any of them care. And these ladies are like dudes so much that they say “dude” to each other. Our two ladies (I say ladies because I don’t want to say girls or women or other less complimentary appellations) are named Ilana Wexler and Abbi Abrams, played by Ilana Glazer and Abbi Jacobson. Glazer and Jacobson are creators, co-writers, and performers, and their involvement goes back to a web series they created before it was picked up by Comedy Central. Amy Poehler is one of the executive producers. The episodes are peppered with guest stars such as Seth Rogan (Glazer makes an appearance in Rogan’s The Night Before), Kelly Ripa (Live with Kelly and Michael), Hannibal Buress, Susie Essman (Curb Your Enthusiasm), Bob Balaban (Close Encounters of the Third Kind), Amy Ryan (Bridge of Spies), Janeane Garafalo, Patricia Clarkson, Alia Shakwat (Arrested Development) among many others. A lot of people are supporting these relative unknowns. They must see something.

Glazer and Jacobson have created something smart and fresh at the same time that it is silly, gross, and vulgar. Their point of view is underrepresented on television. It is about 20-somethings who have very few rules. Maybe they don’t know what they are doing, and maybe they are breaking other people’s rules, but they seem to be well-intentioned and cavalier. They are polyamorous and multicultural in their interests. They try not to judge but judge all the time. They are hypercritical but try to be respectful. They don’t tolerate people who bore them, but they are constantly looking for love. In other words, they are typical 20-somethings. Or are they? That’s a question that is hard to answer for anyone, but I suspect their unique perspectives are indeed unique. They might be so weird as to definitely not be role models but are portrayed with such unflinching honesty as to be somewhat representative of all of us. It is absurdist and ridiculous, but always in the context of what seems like real-life situations. Broad City is merciless satire that is directed at everyone including themselves and feels like it comes from a very real place. These women are on the cutting edge of something, and they don’t care who knows it. At times they seem to come from a privileged background and other times seem barely able to take care of themselves. Sometimes the humor is infantile, yet they almost always come off as charming. There are deleted scenes on the DVD that are as good, if not better than, the broadcast content. All in all, they are full of contradictions.

I will end with a bizarre fact that all the nudity (and there is a lot) is pixilated, even on the DVD. What is the point of copious nakedness if it’s hidden from view? Another contradiction? Or is it?