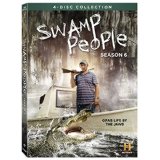 “The way of life depicted in this program dates back 300 years. Hunting, especially alligator hunting, lies at its core. Some images may be disturbing. Viewer discretion is advised.”

And they’re not kidding. Gator hunting is a bloody business, and this show gets you right up close and in the action. The hunters set hooks with bait, and once a gator is hooked they must reel it in and shoot it in a very small vulnerable spot in the back of the head. Let me warn you that animals were indeed harmed in the making of this film, and you’re going to witness that harm. If you’re an animal activist, I suggest turning to the Disney Channel for this particular hour. The rest of you will get a front-row seat to a truly thrilling non-stop alligator hunt.

Leave it to History to find yet another profession that they can deliver to our living rooms and home theaters so that we can be entertained by someone else’s reality. When I first heard the title of Swamp People, I had something entirely different in mind than what I ended up with. I guess I was prepared for some hidden creature-folk who might be spotted between the swamp gas and the Spanish Moss Monster from an old Kolchak episode. Perhaps those are the images they intended for us to conjure, at least at first. But these swamp people are regular hardworking stiffs like the rest of us, only they make their living off the swamp itself. It provides food, transportation, income, and entertainment. Much of their Cajun lifestyle has been handed down for centuries from generation to generation, and one of those traditions is gator hunting.

When I was young, alligators were considered somewhat of an endangered animal and protected in most places. A lot has changed since that time, as I’ve come to discover firsthand as a resident of Florida these days. Gators sun in my own back yard on occasion, and they’re pretty much everywhere. In Louisiana, the state game folks have been dealing with the rising population of gators by authorizing a limited 30-day hunting season. Not just anyone is permitted to hunt the prehistoric reptiles. They must purchase hunting rights to the areas they will hunt, and they must buy the limited number of tags they can use during that season. Failure to use all of their tags means less at their disposal the next year. But a good hunter can take over 500 gators out of the swamps in that time. Obviously, we’re going to meet some very good gator hunters on this show.

There’s something new going on this season. Johnny’s Seafood is one of the official gator buyers. They wanted to increase their profile by creating something called The Bounty In The Bayou. They’ve offered $10,000 for the largest gator caught in the season’s first 21 days. I won’t tell you who wins, only that it’s a brutal competition that comes down to an inch. It also causes hunters to lose focus on filling their tags in order to try to bag the 10-grand winner.

The King of the Swamp is still Troy Landry. He consistently brings in the big gators and fills 500 tags in the month-long gator season. Of course, it’s become a family business, with his sons Chase and Jacob manning their own boat. They’re also out to prove they can hang with their legendary father.

Liz returns as the only female captain on the show. She’s joined by her husband Justin this season. RJ and son John Paul decide that it’s time to return to their Native-American roots and participate in some rituals to clean away the evil spirits. Evil spirits also get in the way of David and step-son Jeromy when the younger ignores the warnings and gets out of the boat at a haunted Spanish fort ruin. Things go badly until they attend a revival meeting on the swamp and get back on track. Jeromy also comes up with some crazy ideas to get gators. Obviously, his thinking out of the box ends up turning things around as much as the church attendance.

Junior done shot his son one too many times, and Willie is now on his own, filling 150 tags with no help. But it’s more bad luck for Junior. Troy has outbid him on some prime property, and there is some tension between the series staples. He and his wife have also adopted an abandoned river otter, who provides some light moments in the season.

Bruce has to face his first season without his trusty companion Tyler. The zebra-cake-eating dog died at 13 years old last year, and Bruce keeps his collar on the boat to have his buddy with him. There’s an emotional tribute to the dog, and Bruce feels his loss quite deeply on the show. He also ends up having to buy both a new gun and boat as they become damaged this season. Bruce certainly has some adjusting to do this season and is a little underused.

Those who are regular viewers know that before the fourth season one of the cast members died. Many of the most entertaining segments used to feature two brothers who weren’t actually gator hunters. Rather, they were the real swamp people, living almost entirely off the swamp. Of course, I’m talking about Mitchell and Glenn. Younger brother Mitchell passed. Now Glenn is babysitting Liz’s two young boys, getting to pass down his swamp knowledge, and it’s actually some of the bright spots of this season. He teaches them everything from building their own boat to how to catch enough crabs to make a little extra money.

One of the dramatic tricks the show has used over the years is that old legendary gator that has thwarted hunters for years. They always have ominous names, and this season sees no shortage. Such evasive beasts this season have names like Crooked Jaw, Cujo, King Louie, Beast Of Bear Lake and The Phantom. Even Troy shies away from such a gator, claiming it brings bad luck to anyone who crosses his path. Once the curse is upon you, the only way to rid yourself is to finally take the big boy down.

The show spends most of the time following the hunters out on the swamps. But you do get to spend some time checking out their families and some of their traditions. They work hard, and some of them play just as hard, and the History cameras are there to cover it all for you. The show’s big flaw is how repetitious it all can be. The narrator runs out of adjectives to describe each gator as it’s being fought. Never ceases to amaze me how surprised everyone is when there’s a gator on the line, I mean, when you consider that’s what they’re hunting for. Anything to try to cover the sameness of it all. But as long as that’s what you’re looking for, you won’t be disappointed.

The cast is bigger, and the hunting is a little wilder. Still, the stars of the show are the hundreds of gators that these guys bring in each season. This is the kind of show where you know exactly what you’re getting into. You think Survivor is a reality show? This is real survival. The kind of job where the only way to survive is “Shoooooot!”

Gino Sassani is a member of the Southeastern Film Critic's Association (SEFCA). He is a film and television critic based in Tampa, Florida. He's also the Senior Editor here at Upcomingdiscs. Gino started reviewing films in the early 1990's as a segment of his local television show Focus. He's an award-winning recording artist for Omega Records. Gino is currently working on his 8th album Merchants & Mercenaries. Gino took over Upcomingdiscs Dec 1, 2008. He works out of a home theater he calls The Reel World. Favorite films: The Godfather, The Godfather Part II, The Body Snatcher (Val Lewton film with Karloff and Lugosi, not the pod people film), Unforgiven, Gladiator, The Lion King, Jaws, Son Of Frankenstein, The Good, The Bad And The Ugly, and Monsters, Inc.
The 5th Wave Tuesday Round Up: January 26, 2016