Posted in: Disc Reviews by Brent Lorentson on January 24th, 2016 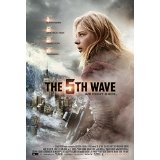 Ever since Twilight and The Hunger Games have taken off to become successful young-adult franchises, it would seem studios have scooped up just about every young-adult property in hopes of catching this magic (or money) in a bottle.  While these cash-cow franchises continue to pop up, it sadly seems these dystopian titles lack the quality of their predecessors and bring nothing new to the screen either.  When it comes to The 5th Wave, we are given a little hope that perhaps this time, now that the villains are aliens, that we may get something new; unfortunately, this is a wave that smacks its audience in the face with more of the same old story we’ve been tired of for some time.

We open with Cassie Sullivan (Chloe Grace Moretz) on the run through the woods with a rifle in hand.  While scavenging a gas station for supplies, she stumbles upon a wounded man.  The two engage in a standoff as she struggles to decide if the man she is facing down is really a man or perhaps the enemy.  Let’s just say she squeezes the trigger, and we flashback to how the world got so messed up in the first place.  For me I see the cold open for this film, and I expect that perhaps this is going to be a film that delves into what makes us human, or characters conflicted by killing monsters hiding in the shape of humans.  Well, we sort of get that, but the troubling thing is that the film plays out more from the perspective of a sociopath rather than a complex individual holding onto her humanity.

As we see in the flashback how “The Others” attempt to wipe out the planet in their “waves” of attack, it’s as though we are watching a mash-up of Independence Day and The Day After Tomorrow.  The effects just don’t have the “oh my God” impact of the previously mentioned films and instead just come off as something we could see in a SyFy channel disaster epic.

To the film’s credit, this isn’t a film that is just trying to throw effects at its audience, and it does have a family tale to weave together for us.  Following the death of Cassie’s mother, Oliver Sullivan (Ron Livingston) is tasked with keeping his daughter and son, Sam (Zackary Arthur), alive.  I wish the film kept with this idea of a father struggling to keep his family alive against the elements, the scum of humanity, and “The Others”, but instead it keeps things simple and has the family go to a refugee camp in the middle of the woods.  This decision makes no sense, considering they seemed safe enough at their home, but sure lets go with the thought process that Oliver just believes in the strength of numbers.

In comes the military, led by Colonel Vosch (Liev Schreiber), who just looks so bored being in this film.  Colonel Vosch and his platoon have a plan to rescue everyone, and the first wave of this rescue involves getting the children out of the camp and to a nearby air force base.

This catches us up to the opening sequence of the film as Cassie is tasked with catching up to her family after being separated.  What follows is a bit of a mash-up between Red Dawn and Starship Troopers as the able-bodied kids are trained to fight “The Others”.  On the road to the air force base Cassie crosses paths with Evan Walker (Alex Roe), the pre-requisite love interest that is of course the mysterious brooding type.  We’ve seen this kind of relationship pan out time and time again, so brace yourself, as this relationship unfolds in predictable fashion.

While kids and young teenagers may enjoy this film, just about anyone else will find themselves rolling their eyes at the predictable nature of the film.  What is kind of frustrating with this film is if there is no sequel this may go down as one of the most unsatisfying endings I’ve seen in some time.  Releasing the film in January tells me they don’t have too much faith in this film, yet it’s at a time where if it’s going to stand a chance to recoup its budget, this is the only spot it may fit in.  I don’t exactly see this being a tsunami at the box office, but stranger things have happened.

Brent Lorentson is a horror writer and film critic based out of Tampa, Florida. With a BA in Digital Film, he co-wrote and co-directed Scavenger Hunt. His short stories have appeared in various horror anthologies. In 2019 his short script Fertile Blood will be a part of the anthology horror film Slumber Party. He is currently working on his first novel A Dark and Secret Place set to be released in late 2019. Favorite Films: Taxi Driver, Fight Club, I Saw the Devil, The Wild Bunch, Dawn of the Dead, A Clockwork Orange, Pulp Fiction, Heathers, The Monster Squad, and High Fidelity.
I Believe in Unicorns Swamp People: Season 6