For Better or For Worse

Posted in: No Huddle by Dan Holland on February 3rd, 2016 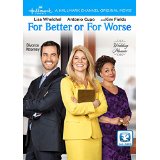 I’ve never been too big a fan of romantic comedies. They are often too quirky for their own good, and they follow a typically cliché story arch. I do not even enjoy rom-coms from famed comedic directors such as David Wain. Although certain directors do attempt to break the mold, it’s as if the genre is nothing more than a memory foam mattress: you will always fall into place, because it is the most comfortable. That being said, when watching a made-for-TV rom-com such as For Better or for Worse, one can assume there will not be much breaking of the genre conventions.

For Better or for Worse tells the story of esteemed wedding planner Wendy (Lisa Whelchel), whose life is turned upside down when her son returns home after quitting law school, and a divorce attorney (Antonio Cupo) moves into the office next to hers on the same day. To make matters worse, her son has brought home a new vegan fiancée who has “changed his ways,” and surprise, her dad is the hot new divorce attorney on the block. When her business partner (Kim Fields) can only offer so much advice, she makes an unlikely team with the divorce attorney in order to collectively ruin their children’s plan for marriage.

I will go out on a limb and say that I would not fit into the target audience that this film was going for. Some viewers might find it interesting that Lisa Whelchel and Kim Fields both starred in the 80’s sitcom The Facts of Life. However, Fields does not play a large role in this film, so any existing chemistry they may have had from previously working together does not show. While the acting isn’t bad, per se, I have a rather big issue with the actual casting of the film. Whelchel and Fields most certainly look their part (two women in their late 40s); Antonio Cupo plays a father to a woman who looks no more than ten years younger than him. Because of this, certain plot points and dialog exchanges feel as if they are to be viewed as siblings.

My biggest issue with the film, and really, all made-for-TV rom-coms, is the spoon-feeding of comedy to the audience. It drives me crazy watching films like this throw a joke at you, but then over-enunciate it with a repetition of dialog or extremely fake facial gestures that translate to nothing more than “yes, you should be laughing!” It is about the cinematic equivalent of lighting up the “applause” sign in front of a live studio audience. It’s bothersome. It makes me feel angry for their targeted demographic.

The film’s structure is fairly solid; it can definitely stand on its own as a quirky, family-friendly comedy. While I can’t say that I enjoyed the film as a whole, I can say that the film allowed me to identify a characteristic in film that I never understood that I liked. If a film is set in a quaint little mountain town, I am going to enjoy the film. I have seen so many genres that take place in this setting: romance, romantic comedy, horror, drama, mystery, etc. If the film is set in a small town with mountains in the background, that setting alone is enough to get me through the movie without fail. To be fair, the images captured by the cinematographer add a lot to my appreciation of this setting (to be honest, I don’t know if it is shot on location at times). Overall, it’s about as good as a made-for-TV family movie can get: I would never choose to watch it, but there is enough craftsmanship and little mountain town to keep me engaged for about 85 minutes.